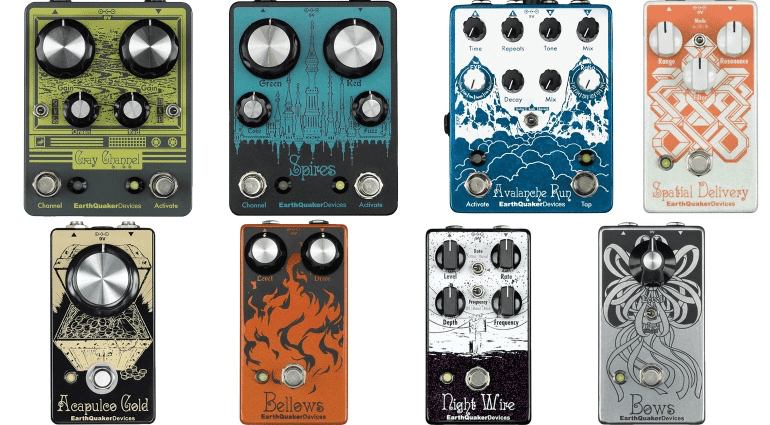 So many new pedals for 2016. Where shall I start? Everything from Fuzz to Boosters and Tremolo to Reverbs!  ·  Source: http://earthquakerdevices.com

There are a lot of new pedals in the Earthquaker Devices 2016 lineup and so I have endeavoured to add a video demo of each pedal where available. The lineup includes a lot of drive pedals, yet also features some more unconventional stuff which caught my eye. This company has a reputation for quality, hand-made products that fall firmly in the boutique pedal category. All prices at the time of writing are in US dollars only.

Bows – Germanium Preamp Booster USD 145.00 This is a germanium preamp/booster pedal which utilises a NOS OC139 Black Glass transistor. It has one knob for the amount of boost and two modes, accessed by the mini toggle switch on the front. These are the Full and Treble modes, and each has its own character. Treble is more like a traditional ‘treble booster’, whereas Full is warmer, with more low end.

Gray Channel – Dynamic Dirt Doubler USD 195.00. This is a twin-channel overdrive pedal with a ‘green’ side and a ‘red’ side. It uses both a silicon and a germanium diode for the green channel, and a Mosfet and an LED for clipping on the Red side. This seems a versatile overdrive with lots of tonal options. It’s based loosely on a certain classic ‘grey boxed overdrive’ pedal…

Spatial Delivery- Envelope Filter with Sample & Hold USD 195.00. This one sounds like a lot of fun. It’s an envelope filter that is voltage-controlled. It uses the usual controls, with Up Sweep, Down Sweep as well as Sample and Hold modes. Range, Resonance and Filter controls allow you to emphasise filter sweeps in the Up and Down modes. Funk in a box and then some!

Spires – Fuzz Doubler USD 195.00. This is another two-channel unit: the Green channel is based on a Rosac Nu Fuzz, and the Red channel models their now discontinued Dream Crusher pedal. Spires offers two channels of fuzz – and not of the subtle variety. The distortion is tweaked using the Fuzz and Tone dials.

Night Wire – Dynamic Harmonic Tremolo USD 145.00. A feature-rich harmonic tremolo. According to the makers, “the signal is split into high pass and low pass filters, then modulated with an LFO that is split 180 degrees”. This sounds fun and I do love tremolo pedals, so would like to try this one out myself. It looks like a lot of features have been packed into one small pedal. The idea of dividing the signal and then adding the tremolo is a good one to my mind, and I look forward to hearing how it sounds in a live setup.

Bellows – Fuzzdriver USD 145.00. A transistor based, two-knob dirt box! Judging from the company’s description, it should be pretty amp-like, with plenty of grunt. Expect lots of low end growl and grit. I like simple dirt boxes and this looks to be just that.

Acapulco Gold – Poweramp Distortion USD 117.00. This is based on a Sunn Model T, and with just one big knob. This pedal is designed to emulate power amp distortion and is being touted as a simple way of getting that sound from a pedal without having to crank an amp. This could get close to fuzz tones at its more extreme setting, so expect some serious output from this simple-looking pedal. This was allegedly going to be a limited run product, but the company have now decided to make it a regular fixture in their lineup.

Avalanche Run – Stereo Delay and Reverb $295.00 USD. This is still in development, according to the company’s site and might be presented at NAMM if it’s ready in time. This is a DPS based reverb/delay and will be sold exclusively via reverb.com.

No audio demos have been released for this product as yet, however if I find one I will add it.

Earthquaker say it will include the following modes:

29 Nov · The purple on the wheels looks nice.

29 Nov · I must add: it would be great to have a present for my friend at christmas - because she is starting to make music right now. This would be the best christmas gift for her..

29 Nov · Hope this baby can join my collection!