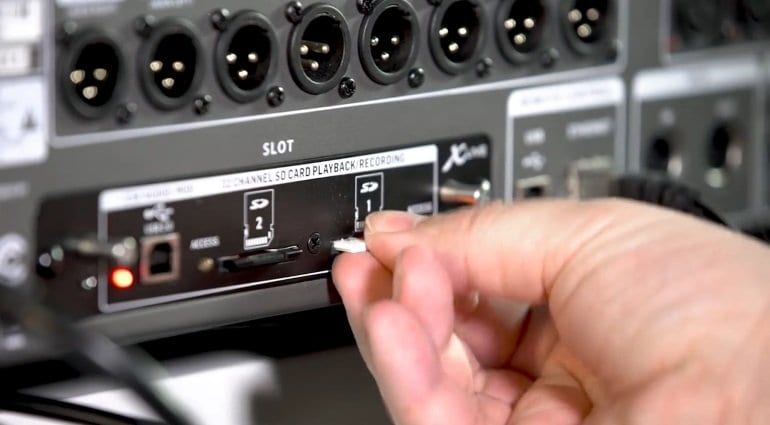 A new video shows that the X-LIVE 32-track live recording and playback card for the Behringer X32 is about to move into production. The expansion card will offer 2x SD card slots, facilitating direct recording onto flash memory. This adds to the board’s existing recording options, such as USB and Firewire interfacing, ADAT, MADI, and Dante. The video below shows a glimpse of how SD recording is accomplished.

Currently, the only method for flash memory recording on the X32 is made possible via a third-party expansion card by Cymatic Audio, the uTrack-X32. The expansion card can be remote controlled via the uRemote software available for iOS, Android, Windows and OSX. A button on the card lets you start recording, so you don’t need the app to control this function.

The Behringer X32 is a 40-input channel, 25-bus digital mixing console. It boasts 32 MIDAS-designed mic preamps and 16 XLR outputs plus an additional 6 line-in/outputs, 2 headphone connectors, and a talkback module with integrated or external mic. There are 25 motorized and fully automated control faders, as well as a built-in 32 x 32 channel USB 2.0 audio interface.

An integrated 7-inch color TFT display provides an overview of workflow components and parameters. The board has a virtual FX rack with 8 slots that have effects simulations like the famous Lexicon 480L reverb, accomplished via 40-bit floating-point DSP. The complete spec sheet can be found here.