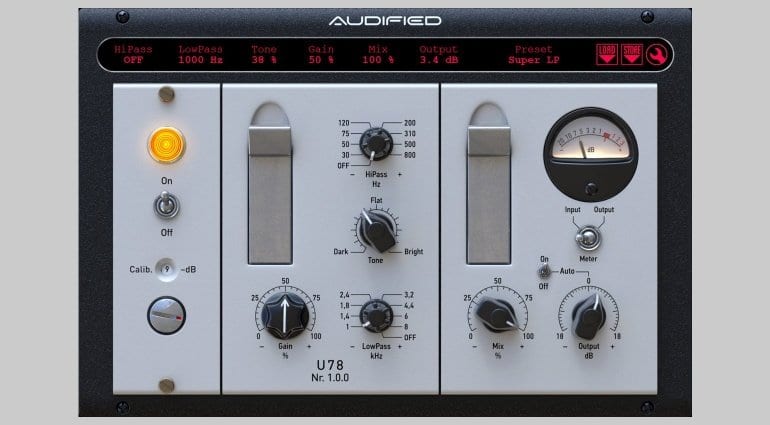 Not another saturation plug-in?! Saturation tools must be very exciting plug-ins for developers to make, as there are so many to choose from. That said, it’s always a good idea to have a few in your collection as different flavours of the bad stuff can yield interesting and diverse mixes. The U78 is based upon a valve hardware emulation and has some glowing endorsements, as seen in Audified’s promotional video. Is this (another) one to add to your sonic arsenal?

The U78 is a further development of the U73b hardware emulation already available from Audified. The U73b is a sought-after German VariMu-style compressor. I’m not aware of another plug-in emulation available. Being an analogue tube device, the next obvious step for Audified was to exploit how hard they could drive their emulation for lots of analogue loveliness.

In addition to the saturation amount, Audified have added several useful parameters to this plug-in. These include high and low-pass filters and a tone control. They’ve also included features we expect from plug-ins these days, such as mix amount and output control. Many ‘old-skool’ hardware units lack both these options.

Without having tried the plug-in myself, I’m really pleased by the sounds generated in the video below. Who knows if further enhancement was added, but the sound they seem to be achieving is great. While this is considered a tube-style saturation, it’s still got plenty of bite.

There’s a 30-day free trial, which is quite generous compared to other manufacturers of today, and should see you through the holiday period. After that, if the U78 is for you, it can be bought for 129 USD which appears to be the introductory price. Eventually that price might rise a further 20 USD. For more information and to download the plug-in, head over to their webpage now.

Here’s a video by Audified on their YouTube channel, which shows a glowing report by Grammy-nominanted producer ‘Baby Brown’, and provides several listening examples. While this provides a great idea what the flavour of saturation is from the U78, unfortunately there aren’t any subtle examples. Presumably, it’s still tasteful and doesn’t get lost in the mix unless it’s driven hard.