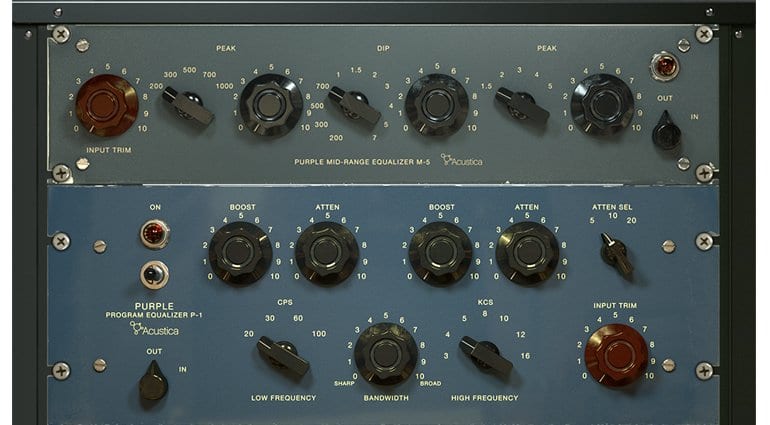 Whenever Acustica Audio release new plugins, they’re often worth checking out. Their current CORE8 ‘multithreading technology’ emulates analogue hardware processors in a very special way. Having tried some of their other plugins, I’m sure these will sound great, but how much CPU will they require?

Badged as a ‘family’ of plugins, the new Purple range contains 2 equalisers. Perhaps more will follow? These are aimed at mixing to create general curves and broadband tonal changes. There’s a lot to be said for using equalisers of this fashion which inherently deliver more sonically pleasing results quicker than a regular modern EQ plugin. They’re often described as being more musical because of the broader changes they make, rather than subtle notches with modern plugins. I can only imagine this is what they meant by “designed to bring back the life and musicality lost in a recording“, because you can’t generate a performance or micing technique with a plugin! I also applaud the lack of frequency graph in this situation, leaving you to turn the knob until it sounds right.

There is an M-5 which is a mid-range EQ, which essentially offers 3 bands, but in a peak-dip-peak arrangement. Effectively this is a ‘smiley-face’ generator that is so often needed. Secondly, there is a P-1 for taking care of the high and low end of the spectrum, but with added bandwidth control. These look like two very characterful EQ’s that should work well together.

There is a 10% saving for early buyers, making the cost of this bundle 174.78 EUR. As with all Acustica Audio plugins, these can be run on Windows or Mac systems in 32 and 64 bit depths, as AAX, AU and VST formats. Let us know if you have tried these and can report on what the CPU usage is like. Typically I’ve found Acustica’s plugins to be DSP hungry, but at least they’ve included zero latency versions.