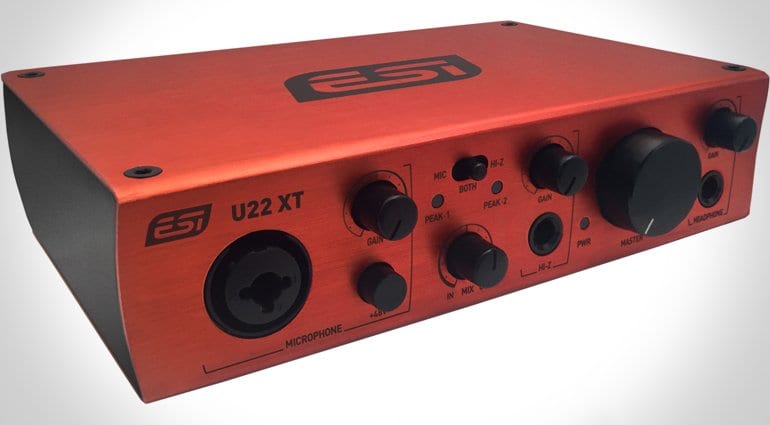 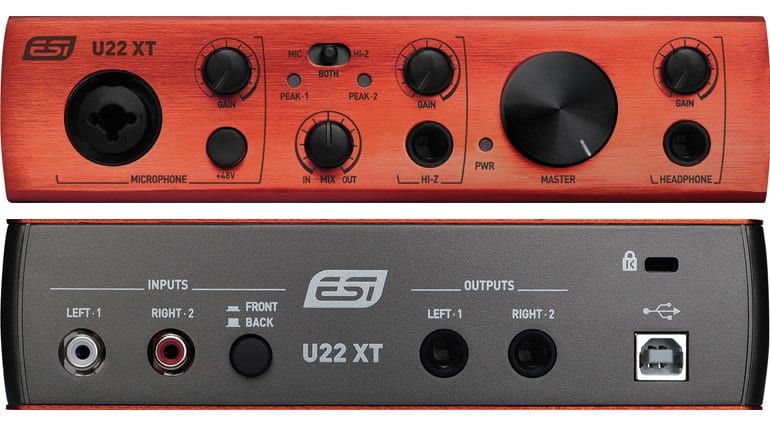 Although it appears to have an orangey-red finish, I can’t help but wonder if it was a deliberate ploy to look similar to some Focusrite interfaces. The red units by Focusrite are their high-end models, and although ESI are speaking proudly of their latest incarnation, the price isn’t high-end.

This new interface from ESI is a USB bus-powered interface for Mac and Windows, which offers a 2 in, 2 out configuration. There are 2 TRS line outputs on the rear for connecting to monitors, and a separate headphone output located on the front. With separate level controls, these outputs are presumably receiving the same source mix which can be blended between your DAW return and the local inputs for low latency monitoring. This mix control seems to be somewhat misplaced on the front panel, located under the second input controls rather than over to one side.

There are 2 input channels, but the U22 XT offers 4 physical connections. These can be selected via a push button between the stereo RCA inputs on the rear, or one mic and one Hi-Z instrument input on the front. ESI claim the mic-pre to be ‘pristine’, and supports +48V phantom power – I thought most modern mic pre-amps do that these days? Operating at 24bits and 96kHz sample rate, this should be a good small portable interface for most applications. Who know’s what the performance will be like, but I imagine it will be respectable. Apparently they’ve designed the drivers for this unit very carefully to ensure low latency on any system, which is so important for modern interfaces. However, I think it’s a shame that the drivers for this bus-powered device don’t extend to tablets, being compatible with PC and Mac systems only.

Prices vary depending on where you look, but figures around 160 EUR seem common. This is a good deal, especially if it sounds as good as the competition, but it’s clearly not of Focusrite’s ‘Red’ caliber. Anyone in the UK after one of these will probably have to ship one from a distributor in the EU at the moment. Hopefully this will change as ESI spread the unit amongst their distributors.

Unless I’m missing something, this interface gives a pretty bad sound. At the standard 44.1k sample rate, Justin Timberlake will sound like Barry White.

You can patch things up a bit by changing to 48k. But that’s just a weird thing to have to do to get a normalized sound and it will kinds all kinds of issues, again, unless I’m missing something. And I’m not a production wunderkind, so that very well could be.