United Plugins and JMG Sound have released Transmutator. The plug-in lets you crossfade between two audio signals in a variety of ways. Do you need a plug-in just for crossfades? Check out the creative possibilities, and you may well find that you do.

A plug-in that does nothing but crossfades may seem like a small utility not worth mentioning. But United Plugins and JMG Sound have packed 16 different crossfade modes into Transmutator, which open up a wide range of creative possibilities. Who knew that you could fade from one audio file or sample to another in so many different ways?

In addition to regular crossfades, the 16 modes include things like mid/side or multi-band crossfading, dynamics, filtering, spectral freezing/blurring, pitch/frequency shifting, and more. There’s also an invert switch that changes the behavior of the modes.

United Plugins says that Transmutator lets you blend two audio signals in many creative ways, which is something that’ll appeal to electronic producers and DJs alike. They also suggest using the plug-in to create interesting audio transitions for video editing.

To crossfade between two audio signals, you need to insert Transmutator in one channel and then route the second channel to it through the sidechain input. In addition to the big crossfade knob in the center, the plug-in offers input level controls for both channels, an output trim control and a dry/wet mix slider.

Turning something like the humble crossfade into an area for creative experimentation is an intriguing idea. At the low introductory price, Transmutator seems like a solid addition to any plug-in folder.

United Plugins Transmutator is now available from Plugin Boutique* for USD 22 / GBP 16.93 / EUR 18.63. This offer lasts until October 2, 2020. A free 15-day trial version is available from the developer’s site. 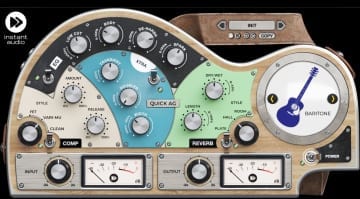 Demo’d this then quickly bought it. A truly unique and creatively useful tool. Who’d have thought a crossfade plugin could be so interesting? Wow.