United Plugins has released Verbum Entropic Hall. The reverb plug-in is inspired by the hardware collection of Prague-based Soundevice Studios. It seeks to combine the best of the analogue and digital worlds.

While 2019 felt like the year of delays for plug-in collectors, 2020 is shaping up to become the year of reverbs. Abletunes RVRB, Relab’s Quantec QRS emulation and Neunaber Audio Wet are just a few of the reverb plug-ins announced in January alone, and United Plugins is adding another one to this list. While Verbum Entropic Hall isn’t an emulation of any particular hardware unit, the developer says that it’s designed as a universal reverb with a “hardware feel”.

The plug-in’s photo-realistic GUI offers the traditional reverb controls like pre-delay, decay and dry/wet, and then some. There’s a width knob for controlling the reverb’s stereo width, a colour control for analogue saturation and a knob that sets the balance of early reflections and the reverb tail. The awesomely labeled Legendarism knob adds a “special simulation process” for enriching the sound with the colour of legendary reverbs.

United Plugin says that Verbum Entropic Hall features an “advanced late reflections treatment algorithm”, which ensures that the reverb doesn’t sound sterile or artificial. The late reflections are controlled with four knobs: size, predelay, damp and lush. According to the developer, the lush parameter “softens and smoothes the reverb sound”. HP and LP filters and an LFO for modulation are among the other features of the plug-in. And just in case you’re looking for the sound of vintage digital reverbs, there’s a 12-bit button, which emulates old AD/DA converters.

United Plug-ins Verbum Entropic Hall is now available from the company’s website. During the 15-day introductory period, the plug-in costs EUR 69. The regular price will be EUR 119. 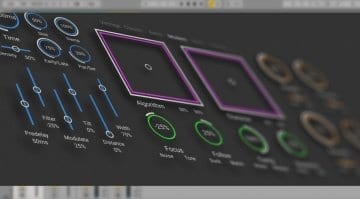 HyperSpace: make your own reverb by combining algorithms