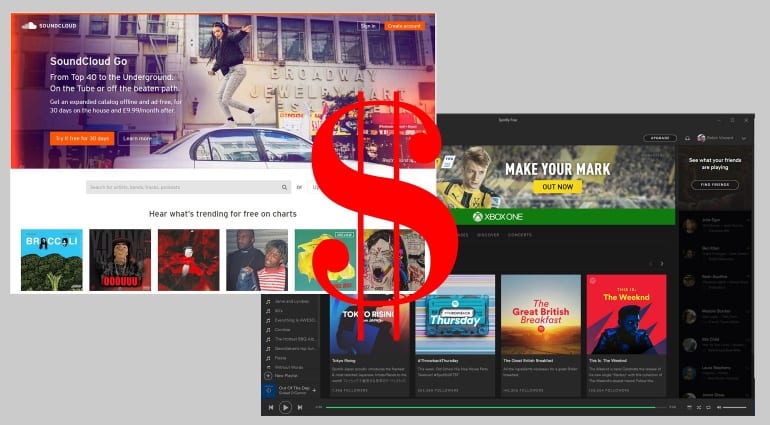 According to the Financial Times Spotify are in serious talks with Soundcloud about a buy-out, which have now reached an advanced stage. Soundcloud has been going through a sort of transformation of late. After impressive growth to over 175 million users they’ve been struggling to work out how to monetise it. Over the summer they introduced a subscription service for the first time, setting themselves up in competition to the likes of Spotify and Apple Music.

Many industry commentators seem to believe that Soundcloud has peaked. They haven’t published any user figures since 2014 which would tend to indicate that they’re probably falling. Soundcloud has very unique content: original material uploaded by individuals rather than licensed from record companies. This would broaden the reach of Spotify into new areas. However, many users listening to original and new music on Soundcloud are likely to also have a Spotify account to listen to established artists. So Spotify wouldn’t perhaps be buying as many new users as the 175 million figure suggests.

Soundcloud’s current valuation has lurched from $700 million to $2 billion and that’s going to put a huge dent in Spotify’s finances. They have brought in around $2 billion over the last year but they still haven’t managed to post a profit. I always find statements like that to be totally extraordinary – it boggles my mind!

So, from Spotify’s point of view it could be a fast way to build in more users and diversify their service. On the other hand I’m not sure they’ll get as many new users as they think, and will be facing challenges in integrating two wildly different approaches to music streaming. The beauty of Soundcloud for me is the openness, the social interaction, the comments as well as the connection between artist and listener. I fear that Spotify would want to control all that, monetise and advertise, which makes it all a lot less interesting. However, it potentially lets Soundcloud artists access a much larger music streaming user base – but then it’s the same old story of getting anyone to stumble upon your music.

Of course it may all come to nothing. How do you feel about it? Let us know in the comments below.