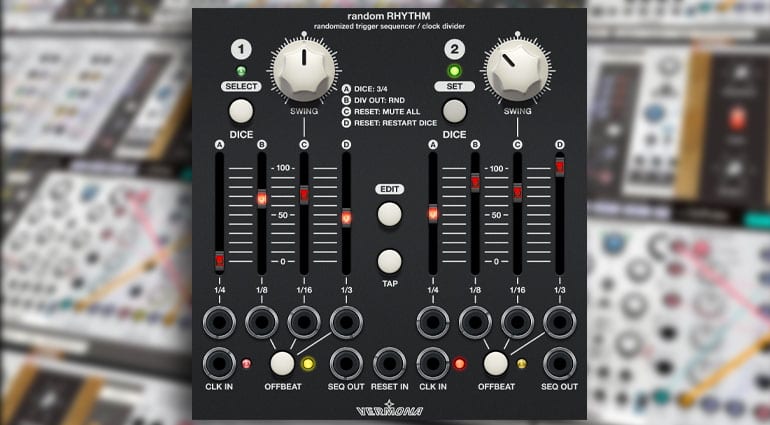 Vermona’s RandomRhythm is a dual-channel trigger sequencer based on randomness and intuitive control over probability and Softube has assimilated it into their Modular virtual environment.

The module is a lot of fun. You get two 4-channel trigger machines set to quarter note, eighths, sixteenth and triplets. With the slider fully up you’ll get continuous triggers on exactly those time scales. As you pull the sliders down the probability of triggering reduces and interesting and organic rhythms start to emerge. You can slide up some hit-hats on the 16ths and get some solid kick drum going on the quarter notes while having an occasional snare on the 8ths – but that’s just the beginning. You can interweave probable outcomes and tweak and change the whole vibe on-the-fly.

Each channel has individual outputs for triggering your parts but you also have a couple of interesting options. There’s a “Seq Out” that carries the whole sequence mixed together. And there’s an “Offbeat” button that when enable prevents lower channels from firing when a higher channel is already on – so your snare and kick drum would never trigger at the same time.

But there’s a more important button called “Dice” that throws a spanner into the rhythmic works by randomising the patterns in play. You can build up a rhythm by playing with the sliders and then just to drop in a change hit the Dice button for a whole new feel – it’s really quite exciting.

You have two identical trigger sequencers to play with that can either be clocked together or run completely independently. Each has its own Swing knob for pushing those beats to interesting places.

Softube has added the ability to save states and presets so that once you’ve discovered something awesome you don’t have to worry about losing it.

It can also function as a clock divider or use it for triggering envelopes on sequences or for controlling the advancement of other sequencers. It can find its way into all sorts of things. Check out my review of the hardware module in the video below.

Softube Vermona RandomRhythm is available for an introductory price of €29 for 30 days and then it will be €39. You need to own Softube Modular. 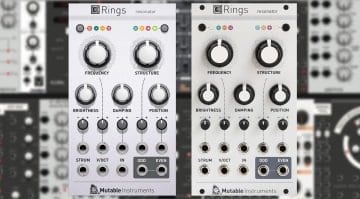