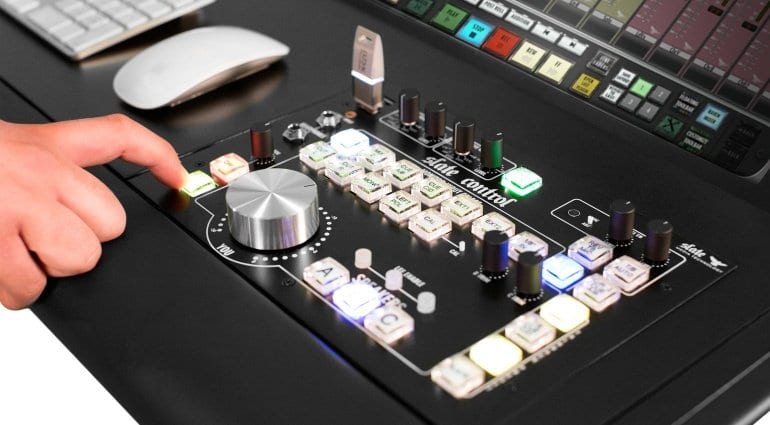 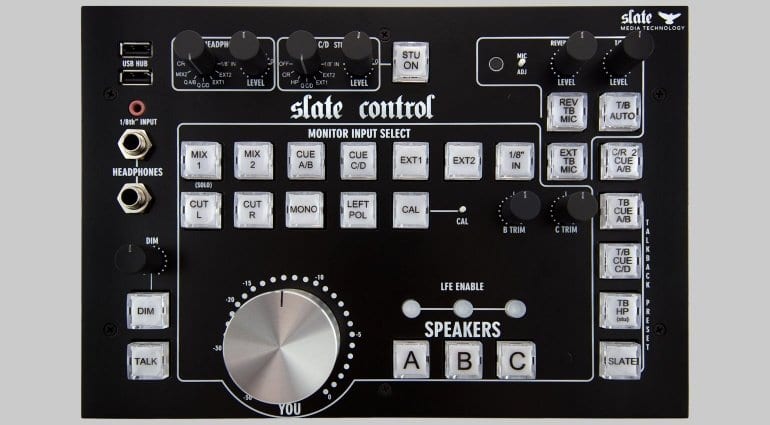 Slate’s Media Technology division announced a new monitor controller at AES this year. As promised, the units have started shipping and even non-RAVEN owners can opt for this supposedly high-quality monitor controller. Choosing the right monitor controller for your studio could be one of the most important purchasing decisions you make, so another option on the market is very welcome. ‘Control’ promises an extensive feature set including surround sound capabilities, combined with “pristine sound quality”.

Perhaps surprisingly for some, Control is a fully analogue monitor controller, leaving all AD/DA requirements to that of individual studio set-ups. I think this is a really wise move and hope the effort and cost has been spent in the all-important area of clean signal paths. What’s more, the product is actually split into two: a remote desktop controller and a separate 2U rack mount hardware unit. This should ensure plenty of available space for the multiple relays that are needed in such a device. Without hearing it, we can only assume audio quality has been addressed carefully.

The remote can be installed into the RAVEN MTX mk2 and RAVEN MTi2 workstations, or used as a standalone unit. According to Slate’s marketing, the remote could be flush-mounted into another surface. The retro-fitting of the remote should be possible thanks to its height of only 7″, which should fit into most fader slot designs. This might give rise to a more accurate monitoring path than some old consoles. Slate also believe that this will also offer a more modern workflow than is possible with older consoles.

Most connections are provided via D-Sub connectors, of which there are quite a few. The number of inputs and outputs to various monitor and studio communication systems are impressive. The concept is influenced by large consoles, presumably due to the heritage of designer Paul Wolff, formerly of API and Tonelux. Features include: LFE Control, headphones, studio speakers, cue, talkback, reverse talkback and external solo interfacing. Up to 7 stereo inputs can be connected to 3 sets of studio monitor outputs, along with multiple cue mix outputs.

Check out the Control webpage on Slate’s Media Technology website for more information. Due to the current situation of the pound and dollar, prices vary. As a guide, if this looks like the monitor controller for your studio, you should budget around 2,150 GBP. This is a fair price, as long as the components a quality as high as that vaunted by Slate.

One response to “Slate release Control”