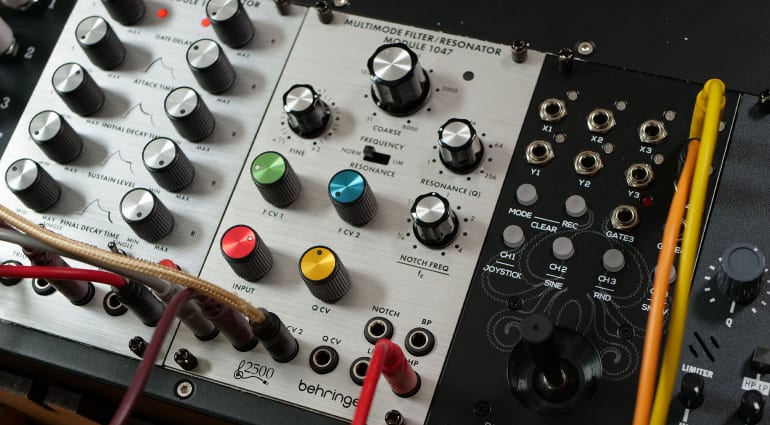 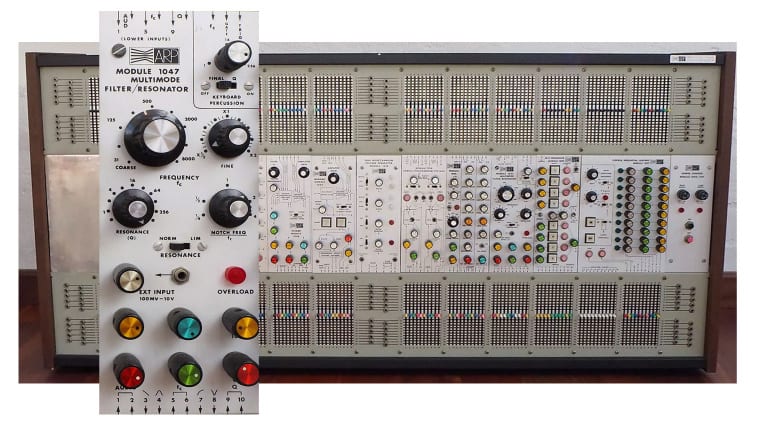 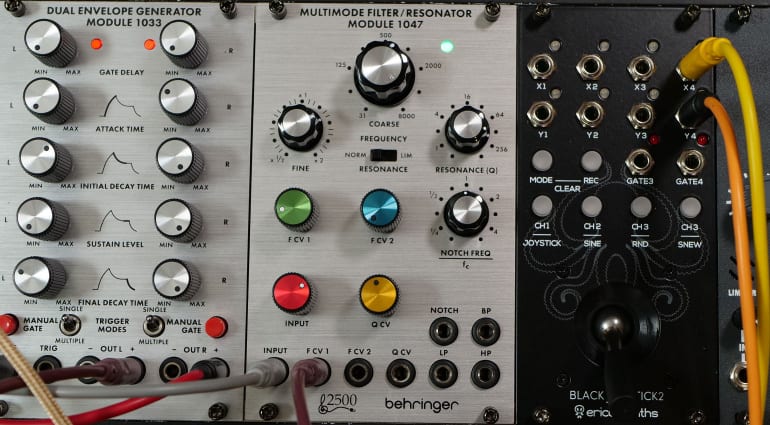 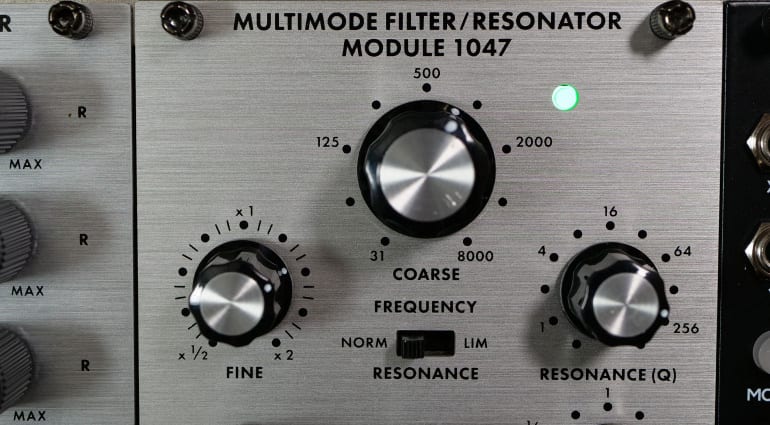 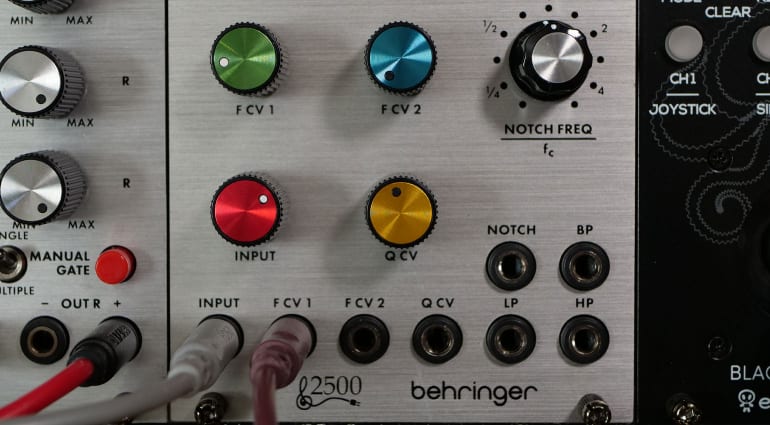 Is Behringer’s reimagining of the ARP 2500 modular system up to scratch? We take a deep dive into the 1047 Multimode Filter to find out.

Behringer’s take on the legendary ARP 2500 modular synthesizer has been slowly appearing in the form of Eurorack modules designed by Rob Keeble of AMSynths. A recent arrival is the Multimode Filter/Resonator Module 1047 which was fundamental in shaping the sound of the old ARP. While I don’t have an original ARP 2500 to compare it to or an entire Behringer 2500 modular system to try it out with I thought it would be worth taking a look at it as a filter module in its own right.

The original 1047 filter arrived in 1970 and was one of the first to feature multiple filter modes. It has four modes; low-pass, high-pass, band-pass and notch and they are all available simultaneously via their own outputs. While we tend to think of filters in terms of squelchy bass lines and long ambient sweeps, the 1047 was designed for audio analysis and instrument synthesis. The idea was that it could examine harmonic structures and potentially produce resonant sounds similar to pipes, flutes and strings. This was a piece of engineering rather than a tool of musical expression but nether-the-less that’s what we really like it for. 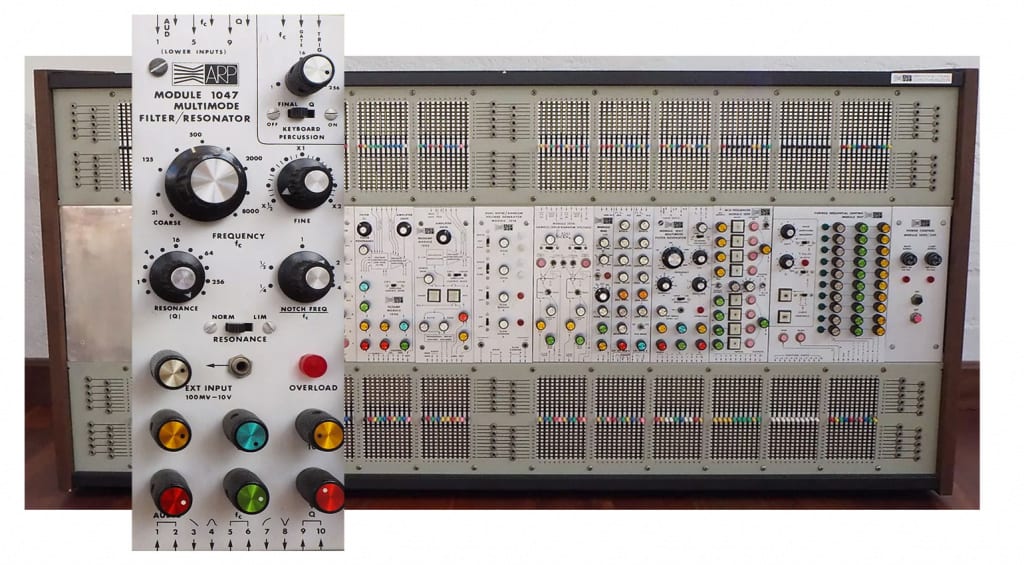 In converting the original 1047 into a Eurorack format certain changes and compromises needed to be made. The ARP 2500 used a large matrix system of routing audio and control voltage and had multiple input and output connections at the top and bottom of the module. For the Behringer 1047 it has just a single audio input, two CV inputs for the cutoff and only one for the resonance. All of them have brightly coloured attenuators that definitely add to that 2500 vibe. 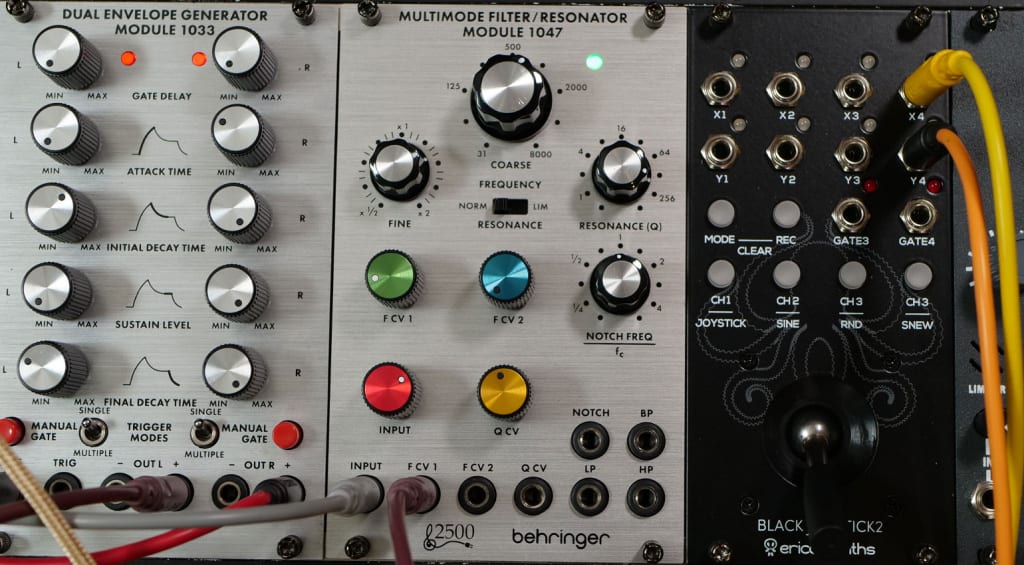 On the front panel we have a Coarse cutoff frequency knob and a Fine knob which covers a smaller range around the position of the Coarse knob. This is very much like an oscillator which is slightly odd because one of the things the 1047 doesn’t do is self-oscillate but there may be other reasons for this level of precision which we’ll come to in a minute. On the right side is a resonance knob and below that is the centre frequency knob for the Notch filter.

In the middle is a limiter switch designed to take the edge off the extraordinary amount of resonance this filter is capable of producing. However, I haven’t really found a situation in which this works. I can get plenty of overload going on as the green LED will attest to but whenever I flick that switch all it does is reduces the output to almost zero. I’m probably not pushing it hard enough! 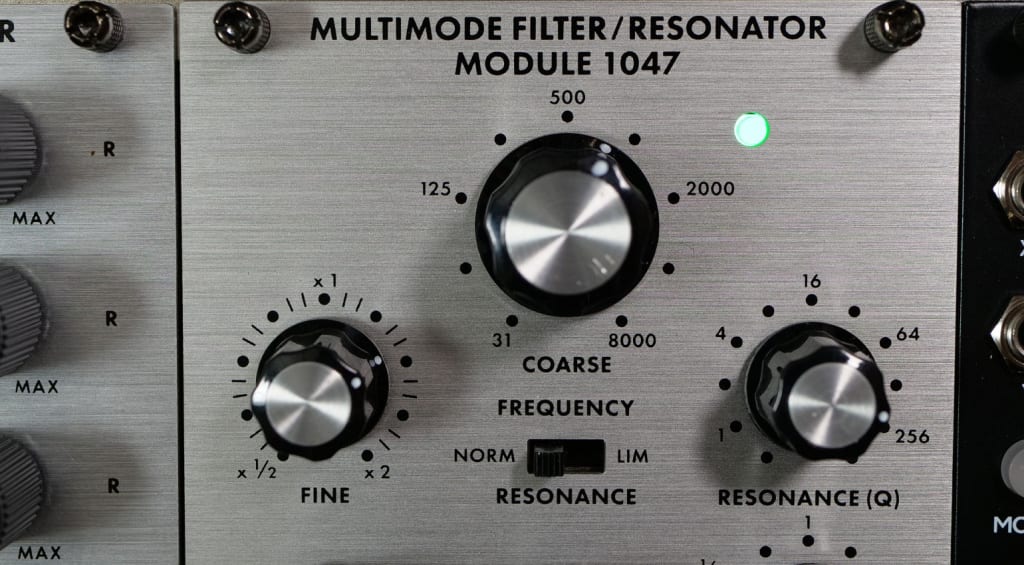 Once you start playing with it the 1047 becomes comfortingly familiar. It’s a filter just like many other filters and you can pull out those squelchy basslines and modulated sweeps with ease. It has a very agreeably warm tone and a smoothness about it provided you keep the resonance quite low. You can bounce along having a merry filtering time. The low and high pass modes do exactly what you expect and they sound great.

The Band-pass mode was designed to reflect the harmonic content of acoustic instruments and does have a nice vibe to it although I think we’ve all left behind the idea of synthesizing the sound of instruments and just enjoy electronic sound for what it is. However, it’s very capable of producing some rather nice formant vocal sounds.

The Notch mode was perhaps less interesting as it didn’t always seem to be achieving very much until you move the centre frequency closer to a high or low pass configuration. That may be my inexperience with Notch filters rather than any flaw in the module. 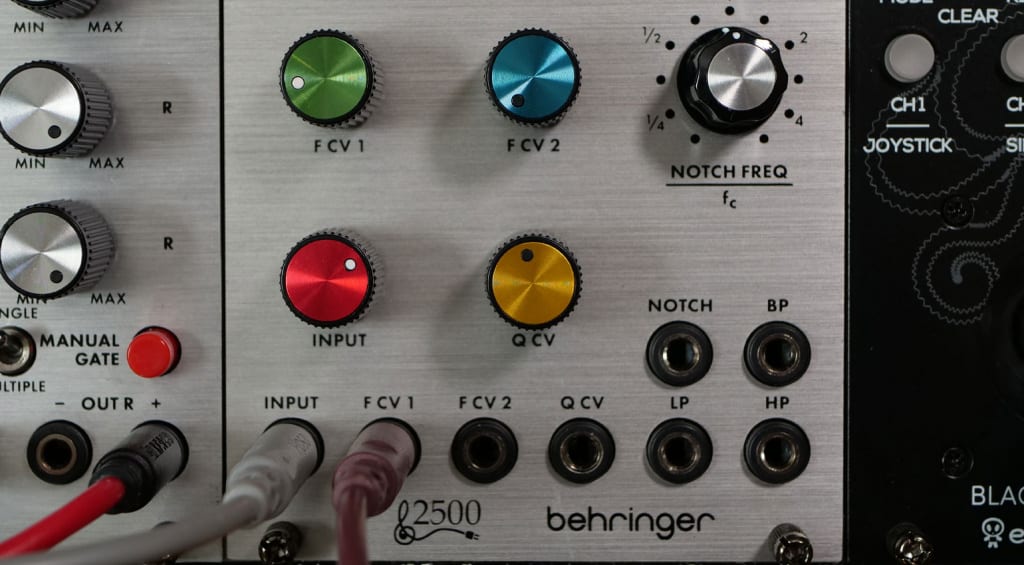 The two CV inputs to the cutoff give you a very versatile response to modulation. You can pump an envelope into one firing with every note while running a slow-moving LFO into the other to keep things moving. It’s immensely satisfying having that amount of animation going on and using the two attenuators lets you seek out sweet spots for the best modulation combination.

So far all of this filtering has been done with the Resonance kept at around the “4” mark. Any further and it very quickly overloads and not in a particularly good or crunchy way. The resonance overwhelms the sound and is difficult to tame which is where that limiter would be handy if it would only do a little bit less than kill the sound. If you go easy, dial the input down a little you can pull useful squeals and throbs out of a high resonance but the amount just seems crazy – never known a filter quite like it.

That may be because the high resonance is actually there for another purpose and is why it’s called a “Resonator”. You can create some rather wonderful tones by “pinging” the filter. What you’re doing is exciting the circuit which causes a momentary self-oscillation or “ping” which is a bell-like sine wave. You achieve this by plugging the Gate output from a keyboard into the audio input and the Pitch output into the CV control for the cutoff. Each time you play a note the filter is pinged and you get this amazingly pure tone. It does everything from bird song down to booms at the bottom end. This is exactly how analogue drum sounds like kick and toms are made.

The original 1047 had both a Gate and a Trigger input to help with the pinging. The trigger would ping the filter and the Gate would control the decay. The problem with using a Gate to ping to filter is that you get a double ping – once when the Gate opens and again when it closes. If you tap a key on your keyboard you get a kind of double strike, but if you hold the key you’ll get another ping when you release it. Most keyboards with CV have Gate rather than Trigger outputs so if you want to avoid the double hit you’re either going to have be very quick on your gating or find a trigger from elsewhere. However, if you go with it or work around it the Resonating ping is really rather marvellous.

You’ll find another use for high resonance if you feed noise into the input. If you turn the cutoff CV input all the way up you’ll get 1v/octave tracking on what is essentially pitched noise. You can sculpt that into all sorts of interesting things.

The Behringer 1047 ticks all the boxes as a musical and modulatable Eurorack filter. It’s completely capable of coming up with warm and edgy filtered sounds and strikingly good harmonics. For normal use you’ve got to watch that Resonance doesn’t get out of hand. It also has a lot to offer in more experimental forms and you just have to love pinging it.

It’s ridiculously good value for money although the build quality is a bit on the light side. 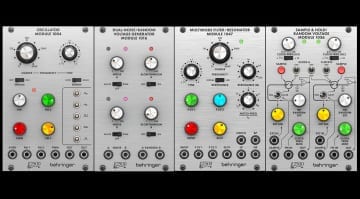 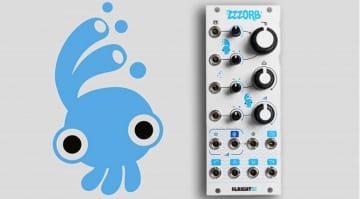 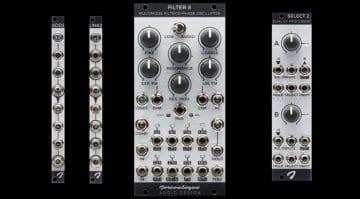