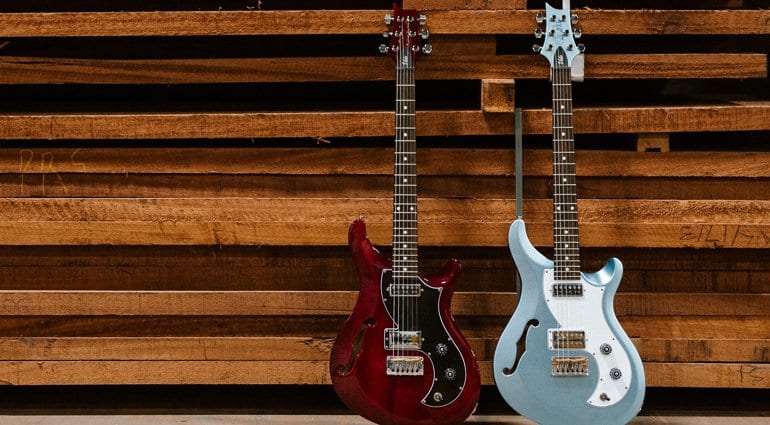 Let’s start off with the pickups. Each of these guitars comes equipped with PRS Starla “S” pickup in the bridge and a PRS-Designed Type-D single-coil in the neck. That’s the same as the standard production model. In fact, the Vela Semi-Hollow looks identical to the regular model in every way, just with a Semi-Hollow body construction. This pleases me a lot, as I own a regular Vela model myself (pretty sure I had the first one in the UK) and it is, in my opinion, a fantastic guitar. They are part of the PRS S2 range, so they’re built in the USA but with parts made made in Asia to keep the costs down.

The Vela Semi-Hollow is a dream realized. It stemmed from the initial design concepts that Jon Wasserman and I drew up when developing the model years ago, was birthed within the Reclaimed Limited run in 2018, and has finally made its way to live in our product catalog. An epic journey finally brought to life for all to enjoy. But don’t take my word for it, please take the time to go try one for yourself.

The guitar is made from mahogany with an F style cutout on the top of the body. You get a Pattern Regular neck that is also mahogany, with a 10″ radius rosewood fretboard with dot markers, along with 22 frets. The model has low mass locking tuners and the tuning is rock solid on my one, so I expect these to be the same.

The S2 range is a lower-cost range that uses solid colours instead of flamed ’10 Top’ Maple, abalone Birds and gold hardware. You get the same build quality but the price is kept down by avoiding flashy extras.

My favourite part of the guitar’s design is the bridge, which uses a three-barrel system similar to a Telecaster. Apparently it was one of Paul’s early designs and uses a traditional bass plate-style bridge but is top-loading for easy restringing. There’s a recess in the guitar’s body shape to accommodate it, so it’s not string-thru like a Telecaster.

The S2 Vela Semi-Hollow is available in Antique White, Black, Frost Blue Metallic, Frost Green Metallic, McCarty Tobacco Sunburst, Vintage Cherry and Walnut. Okay, as you may have guessed, I’m already a fan of the PRS Vela and so these new semi-hollow models appeal to me straight away. Check out the official demo video below to hear them in action.