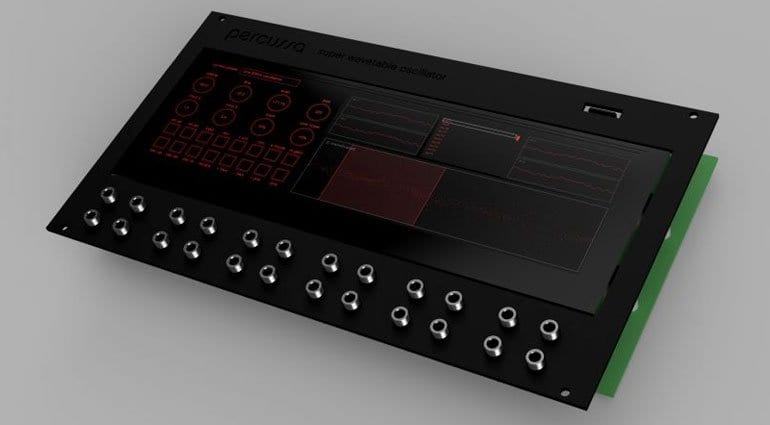 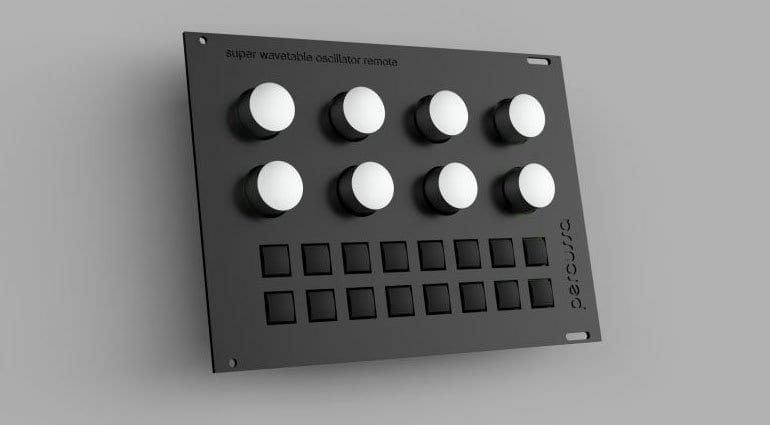 From Percussa, the makers of the slightly weird and innovative System 8 digital modular system, comes the suggestion of a Super Wavetable Oscillator (SWO) for Eurorack. Bert Schiettecatte from Percussa has posted a couple of images and details of the idea on the Muffwiggler forum to gauge interest. They’ve also stuck it on ModularGrid so that people can see how the proposed modules would look in their own racks.

It’s a wavetable and sampler module for Eurorack that looks like nothing you’ve ever seen. Percussa go directly for style and premium designs and these are works of art. It comes in two parts, the main SWO which houses all the synthesis, and the SWO-R remote controller module that has knobs and buttons.

The SWO is based upon the same technology found in the System 8. It runs on a quad-core ARM cortex A17 microprocessor and is one of the fastest platforms around for synthesis. The power in the module enables it to run 64 wavetable oscillators in parallel, with sample rates up to 192kHz and 32-bit resolution. The system should be able to chop up samples on the fly to create different wavetables. It can scan them in all sorts of ways and open itself up to multiple modulation sources and CV control via the two rows of patch points.

The module sports a 1600×480 pixel IPS display but it’s not a touch display which is where the controller module comes in. The 24 connectors on the front provide stereo sampling inputs, 6 audio outputs and the rest will be CV or Gate inputs.

It’s all digital and so the software, oscillators, routing, modulation and configuration is editable and savable. A MicroSD card slot holds sample data and can be used to update the internal engine. The SWO is 45hp wide and the remote comes in at a mere 36hp. That’s probably why they’re separate but you’re looking at giving up a whole row for this beast.

Bert is predicting the modules to cost around $1500 for the pair, which is probably less than I imagined.

The response on the forum is largely positive. There’s quite a bit of discussion on the merits of having something quite so powerful as a single module in a Eurorack. On the one hand, maybe it could be split into smaller parts, or on the other couldn’t it be much more than an oscillator and become an entire modular platform. Many people come into Eurorack with the intention to build their own synthesizer, to use single purpose parts to put something unique together. The SWO perhaps offers both too much versatility and too much power in a single module. Maybe it would be better as a standalone unit – but then we already have the System 8 which is essentially that. Discussion continues.

I think it’s great that Percussa are looking outside of their own eco-system into offering interesting integration with other systems. It’s also awesome for them to do something with the AudioCubes that make for a very specific modular experience. It’s not the sort of thing that I’d like to see in my rack but I can appreciate the potential power in what Bert is proposing.

Bert says that he only really needs 20 interested people to warrant dropping it onto Kickstarter to fund the development through pre-orders. So we could be seeing this progress quite quickly. If I find out anything else I’ll let you know.