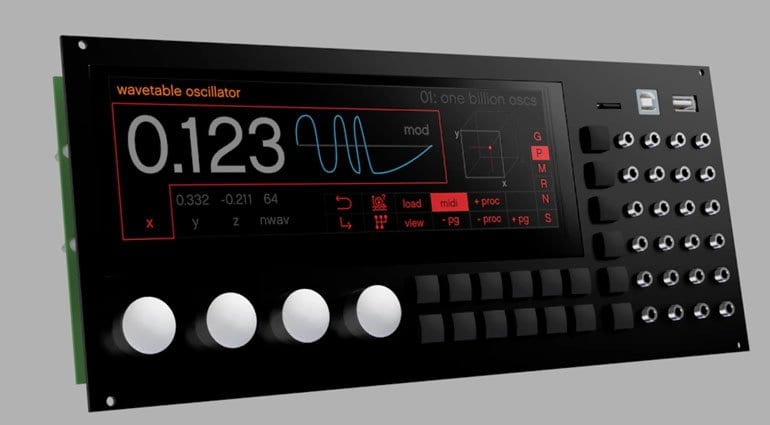 Percussa have been considering a super-uber-awesome Eurorack module using some of the technology from their Synthor System 8. They spread their ideas around the community, shared some 3D renders and took on board a load of comments and suggestions. I wrote about it originally here. Well, they’ve pulled it all together, called it the Super Signal Processor, slapped it on Kickstarter and smashed through their very conservative $20k goal on the first day. Seems like there’s a market for a stupidly powerful, DSP based, synthesizer, sampler thing.

I don’t think they explain it particularly well. The idea is that the Super Signal Processor (SSP) can be pretty much anything you want. The quad-core ARM Cortex A17 processor runs an optimized Linux mainline kernel that runs Percussa’s proprietary DSP software. What that software can do depends on what you want it to do. It’s very open ended – I like that.

Currently, the DSP modules they’ve focused on include a massive Wavetable oscillator with 3D morphing and cloud features and a Sampler with layering. Other modules are the more usually Eurorack bits and pieces like LFO’s, noise, envelope, Waveshaper, filters and sequencer. The Wavetable and Sampling are highly integrated allowing you to record, or sample, directly into the module and then use that as a wavetable or sample creation as you see fit. They reckon that the SSP could run up to 8 wavetable oscillators. That stretches up to 64 with unison and cloud features enabled.

The hardware renders are completely gorgeous. It’s a stunningly futuristic panel, with 4 aluminium knobs, 18 buttons and the best looking patch sockets I’ve ever seen. In terms of I/O is has 8 audio outputs and 2 audio inputs. There are 14 CV inputs for a ridiculous amount of modulation and control potential. And then there’s the stunning 1600×480 pixel LVSA IPS display.

Devil in the details

They go into lots of depth on the Kickstarter page about the specs and functionality, quality of the parts etc. but what it seems to lack is much in the way of musical demonstration. There’s plenty of noise and experimental squeaks, but nothing that inspires you into thinking this could be an awesome source of extraordinary things. And that’s a shame because I believe that’s exactly what this is. For me, I need to know less about the “professional grade microSD card” or the “industrial ADC connected via SPI” and more about how it sounds, how it modulates and how it integrates into my rack.

I really like how they’ve integrated the design. Originally the control section was separate, but now they’ve brought it all together. I’m also keen to get my fingers on some Percussa technology that doesn’t involve the slightly cumbersome AudioCubes. This could be a really interesting direction for their technology. The fact that they’ve hit goal and 19 people (so far) have bought into it shows that enough people understand what they are doing to want to invest in it. I think they could attract a lot more interest with some straight talking and musical content.

$5 will get you a sticker, $25 a t-shirt, and $150 the most expensive poster in the world. If you want to experience the SSP for yourself then it starts at $1,450 for the DIY kit. Although only $50 will get you a built one. $1600 gets you one of the first off the production line and there are plenty more cool options like engraving, or having them hand deliver it to you – nice!

For all the information head over to their Kickstarter page.