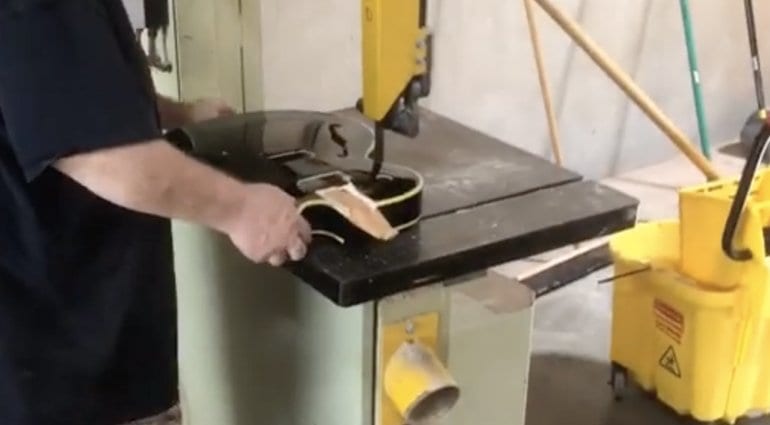 According to the channel hosting the video, which has since been removed, these were new instruments. It makes you wonder what can be so wrong with these guitars that they are destroyed like this rather than, say, auctioned off for charity or stripped down and recycled?

What we don’t know is when this video was shot. It could have been under former CEO Henry Juszkiewicz or perhaps more recently under James ‘JC’ Curleigh‘s watch. It looks like the room in the background is part of a building site. The third video below contains footage purportedly of demolition work on Gibson’s old factory in Memphis, which was sold off last year. Production of the ES guitars were moved to Gibson’s main factory instead. Does this place the new “ES destruction” video at the the old Memphis site? It’s just a guess.

I watched the video before it was removed from YouTube and managed to grab a screenshot. I cringed every time the guy stamped on the guitar necks, but at least the bandsaw was clinical and efficient (compared to a caterpillar track!). In the video, a man also bandsaws off the Gibson logo from the top of each headstock. 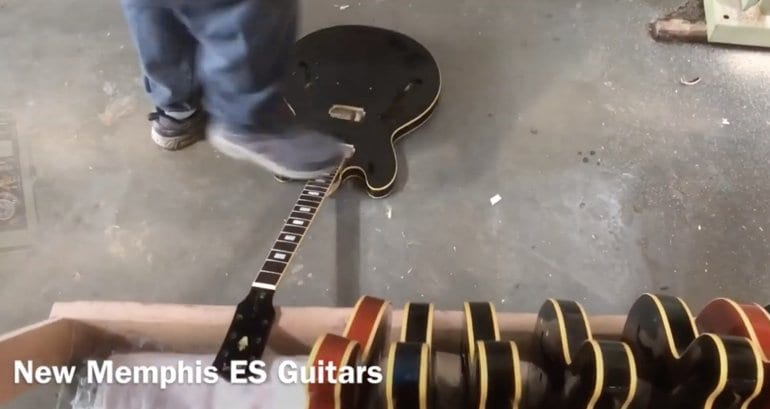 Gibson ES Guitar getting stomped on

Thankfully The Guitologist and Shnobel Tone have uploaded a video containing the pulled footage, so you can see some of the carnage. The Guitologist also gives a few of his own opinions on the Gibson guitar destruction videos from the last few days, it’s worth a watch.

Gibson.
What on earth are you doing?
Obviously, Gibson never wanted these clips to see the light of day, but they’re out there now.
Utterly ridiculous, and they’re P.R. response is laughably unbelievable.
Unsafe? Unsafe how?
With their new apparently crabby and vindictive corporate persona, a textbook example of how to chase away potential customers.

Really not sure what Gibson’s deal is lately but nothing they’re not doing a damn thing to keep people interested in their instruments. These videos that keep surfacing are making them look like the heartless greed-driven corporate whores that everyone had made them out to be. I’ll say this much… Gibson is dead last on my list of builders now.

If you actually work for any retailer, you know this is BS. Gibson has spread this rumor around that they trash guitars with only the smallest of blemishes. It’s just not true.

Please cite sources and provide evidence to support your claim.

Wow. Why anyone would buy a new Gibson after this, especially at their prices, is beyond me.

Just shows the mark up is way too high.

If they are unsafe or not only Gibson knows it. It could be unsafe paint, or a chemical used while this batch was made. In this case of course they should not be donated to anyone and rightfully Gibson destroyed them and made sure they did not “escape” in any way.

With all the used options available, someone would have to be crazy to buy a new Gibson. Gibson may as well put together a “Keep Our Legacy Alive” fund drive and let people just hand their money over to them.

Thanks to people like you, people don’t understand a shit of this industry,

It is defensible to destroy blemished instruments but this is painful viewing. How did Firebirds reach completion before faults were found?

The Gibson Firebird X is one of the ugliest guitars ever made and deserves this end totally.