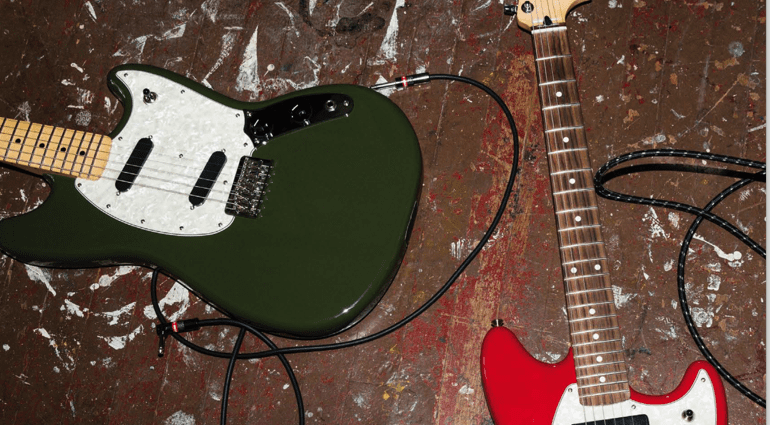 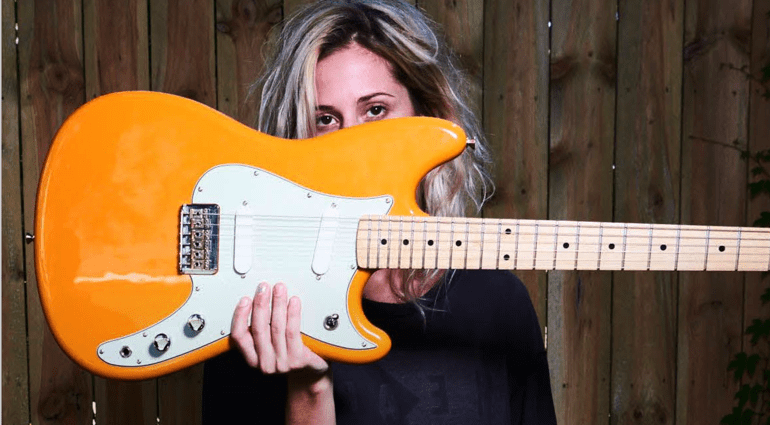 Fender has just formally launched the new range of short-scale offset guitars and basses that we wrote about  back at the Summer NAMM Show earlier this year. These guitars reach back into the company’s rich history and have been updated somewhat for modern players. The range includes the Duo-Sonic, Duo-Sonic HS, Mustang, Mustang Bass PJ and the Mustang 90, so plenty of choice for all you offset lovers.

These new offset guitars have some modern ‘upgraded’ features, fewer switches and a longer scale length than the original vintage models. Although they will probably get the purists all upset, they’ll make it easier for players to get their hands on these guitars from the ’50s and ’60s. And Fender have chosen some classic colours which look, I think, really cool!

With a 24” scale length, a 9.5”-radius maple fingerboard with 22 medium jumbo frets and the “C”-shaped maple neck the Duo-Sonic is a modern updated version of the original guitars from the 1950s.

A three-way switch controls a pair of Duo-Sonic single-coil pickups in the bridge and neck positions, and there’s also master volume and tone controls. The Duo-Sonic has a six-saddle hard-tail Stratocaster bridge, so tuning and intonation should be spot on.

Available in either Artic White, Capri Orange or Torino Red, these new versions will certainly get you noticed. 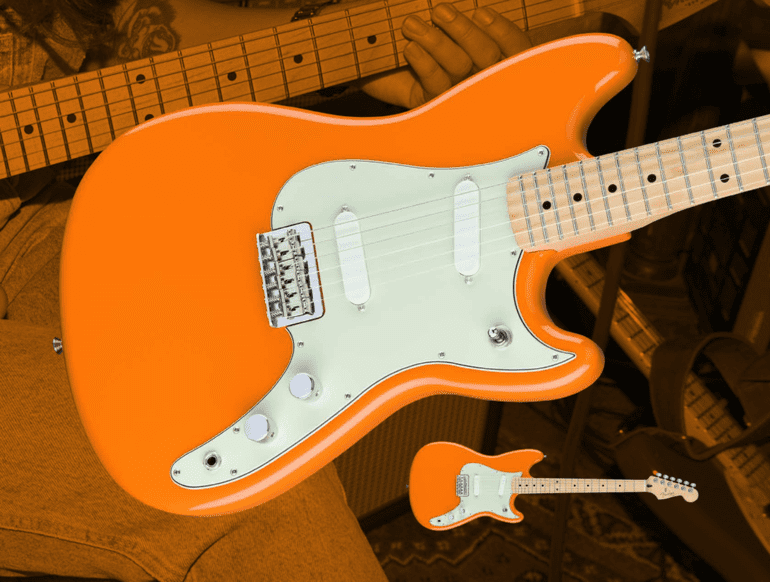 This is similar to the Duo-Sonic above but with a humbucker in the bridge position, which Fender states has ‘coil selection’, so we assume it splits.  It’s available in the following three colours: Black, Surf Green and Daphne Blue. 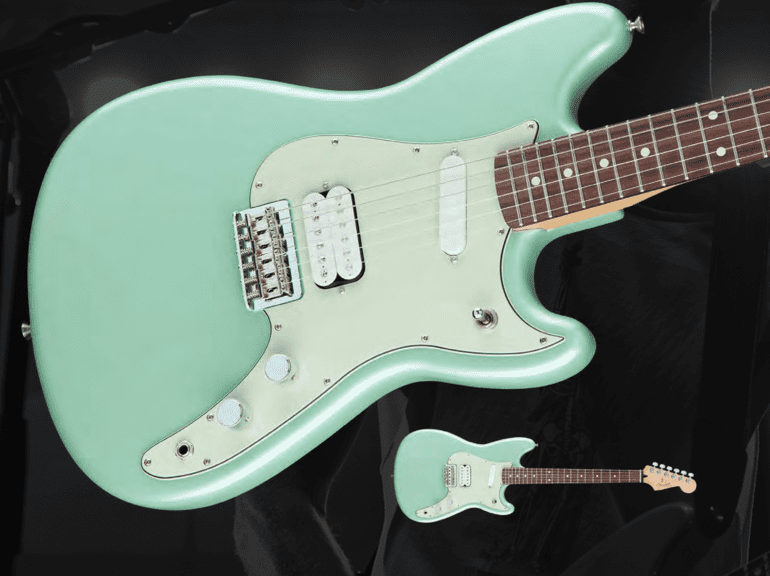 This updated Mustang has the same scale length and neck as the Duo-Sonics above. It also has the Stratocaster hard-tail bridge, which purists may moan about, but I reckon will give you far better tuning stability than the original vintage guitars. The Mustang has a pair of single coil pickups and the same Volume and Tone controls and three-way switch layout as the Duo-Sonics. The Mustang is available in Olympic White, Black and Olive finishes. 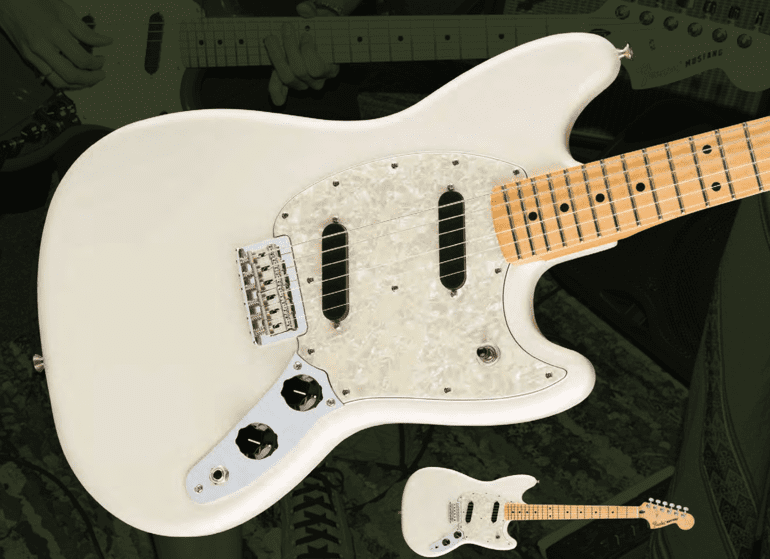 With a pair of Mustang MP-90 pickups, this new variation on the Mustang will give you perhaps a slightly warmer, thicker sounding guitar than the original. The control layout as well as neck and scale length are all the same as the standard Mustang. It comes in Olympic White, Torino Red or Silver finishes. 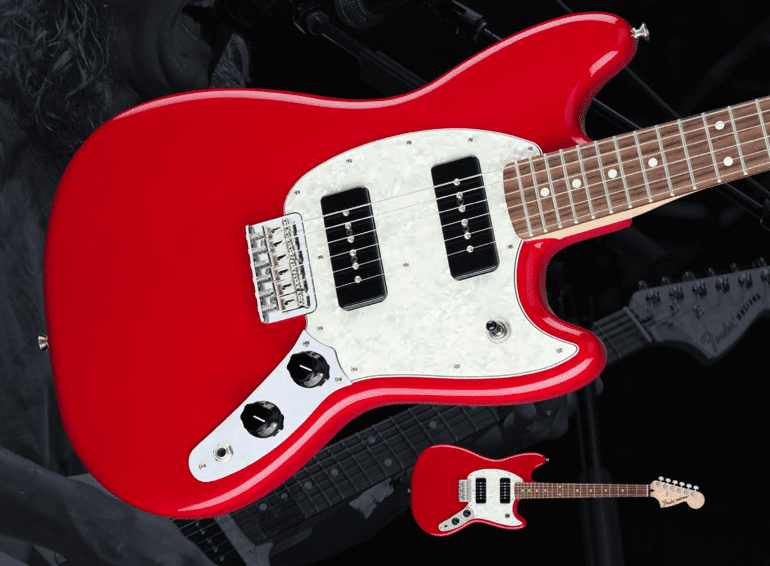 With a  30” scale-length and “C”-shaped maple neck with a 9.5” radius the new Mustang Bass PJ should be a comfortable bass to play. It’s loaded with Fender’s P Bass and J Bass pickups which are controlled by a Master Volume and Tone control, combined with a three-way toggle near the lower bout of the bass. The Mustang Bass PJ comes in either Olympic White, Torino Red or a Sonic Blue. 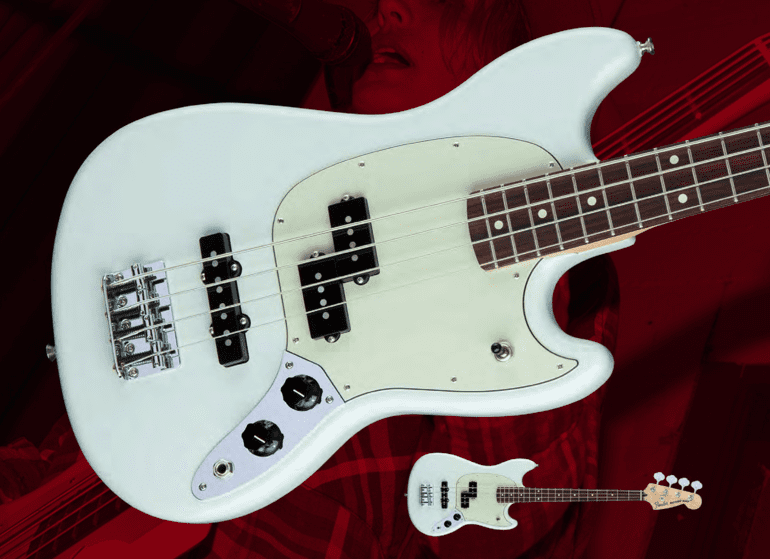 My only real concern is that the UK pricing seems a bit out of whack on some of the models, compared to the US pricing,  but hopefully there won’t actually be these discrepancies when they hit the stores!

More details about these new Fender Offsets can be found here 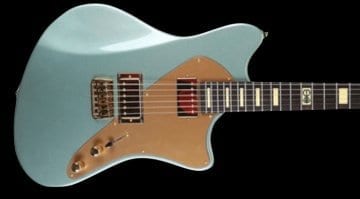 No tremolo? = No of set fender for me.