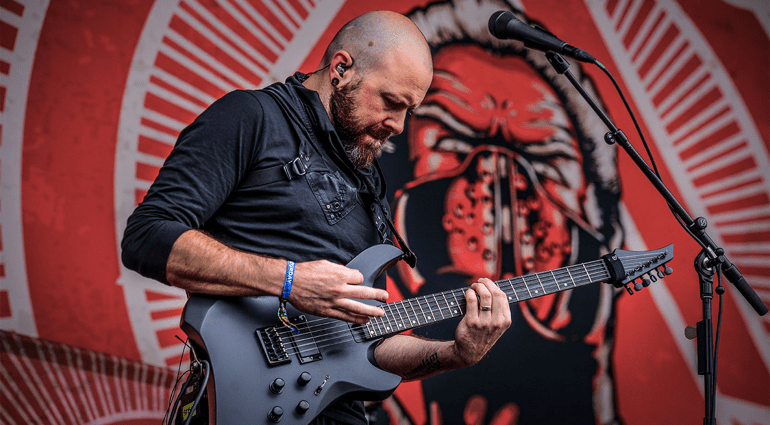 The new Line 6 Variax Shuriken guitar is a 27″ scale length baritone designed in conjunction with 12 Foot Ninja guitarist Stevic McKay. It’s aimed squarely at modern technical guitarists and designed to go further than any other extended range guitar has gone before.

This 27″ baritone scale length guitar that can, Line 6 say, be played in any tuning, via the onboard Line 6 proprietary Variax HD hardware. On paper, it could go deeper and further than any 7-string, 8-String or baritone instrument before it. Modern players have been experimenting with extended range instruments for heavy, technical playing for many years now and so this new instrument will raise a few eyebrows I suspect.

Joining forces with Australian Stevic McKay was probably the best way to attempt something like this. His band 12 Foot Ninja are known for playing heavy, modern guitar styles. The instrument itself looks like a weapon – an impression reinforced by the name – but I suspect it will divide opinions in the guitar community, as it incorporates lots of new ideas.

I’m also pretty sure this is the first time there has been an official signature Variax guitar. This model seems to be doing something new on several levels, which I feel is exactly what the world of guitar needs in 2017. If guitar music is going to move forwards, we need more instruments like this in the world.

I am all for pushing boundaries and I’m looking forward to hearing it in action. The Line 6 page is devoid of any real information yet and the guitar is due out later this year, so we will have to wait and see what it can do. But for now, check out the official Line 6 video below with Stevic describing how it all came about and what he wants from an instrument.