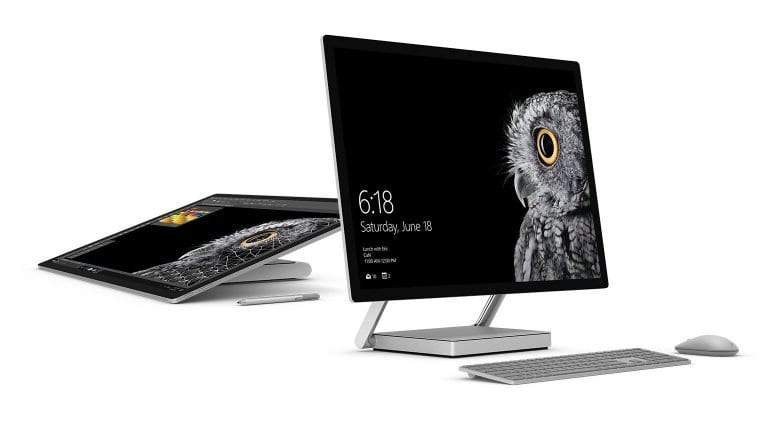 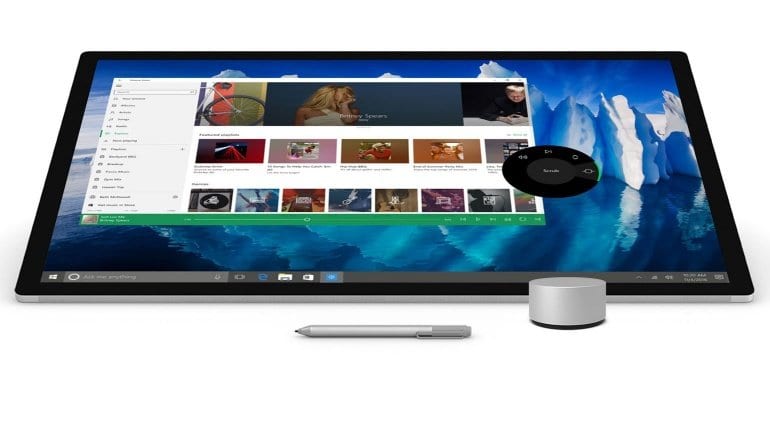 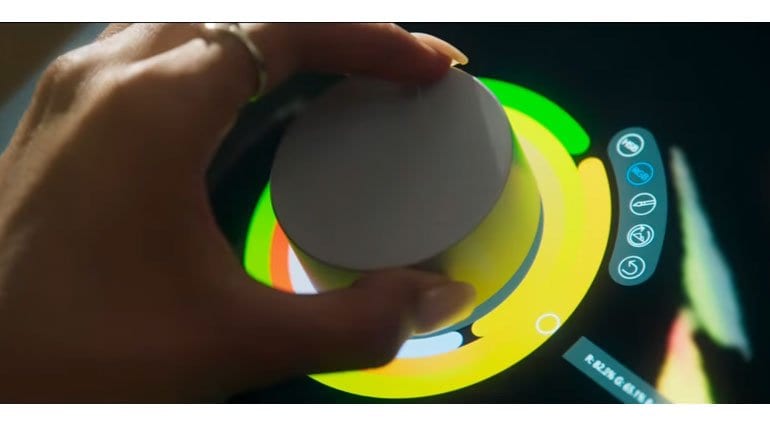 At its event on 26th October, Microsoft revealed the Surface Studio all-in-one desktop computer. It offers a creative touchscreen environment that folds down into a console style device. Add in the Surface Dial hardware knob and you’ve got a combination of things that could sit very well in a recording studio.

There had been lots of rumours about the Surface Pro 5, Surface Book 2, Surface Phone but none of those appeared. Instead what we got was the only slightly leaked Surface Studio. And a lot of quite stunning creative updates to Windows 10.

The focus was quite clearly on drawing, on making art, on working in visual mediums moving from 2D to 3D to augmented and then virtual realities – it all looks like a load of fun. But was there anything there for us hard done by musicians? Well no, but there could be (I’ve also made a video that expands on these thoughts expressed in this article which you’ll find below).

The Surface Studio just made the iMac obsolete. The iMac is arguably one of the most common project music production studio platforms – you see it all over the place. The form factor is awesome, the convenience and the power is enough to run a decent amount of audio software and processing. The Surface Studio brings better processing and a better looking screen to the party. But that’s not what’s important here. What is does is brings the Surface immersive experience and workflow to the desktop. I’ve been banging on about this since the Surface Pro 3. Once you pick up the digital pen – once you start using your fingers your workflow evolves from a passive, sat back mouse driven experience to an active, involved flowing experience.

Channelling all your creativity to that narrow point of a mouses optical sensor seems completely bonkers – we’ve come to accept it so much that we don’t even notice how restricting it is anymore. When working with my Surface Pro 4 I feel so released, so enabled to do so much more that I can very quickly get frustrated with non-touch software in how it slows me down. You wouldn’t create music on an instrument with a single finger – I couldn’t play guitar with one form of input – why should we accept the same on the device we create the most on.

However, to make this work requires two critical things – software and hardware. There’s a fair bit of multi-touch-enhanced music software out there now. FL Studio and Bitwig Studio being the best at the moment. Cubase and Pro Tools can both be readily accessed with single touch and the digital pen. I don’t really want to hear about Windows 10 Apps – there was a glimpse of something called Groove Music Maker in the presentation that looks like an App – no good. Might be fun but without access to ASIO audio drivers the experience will be laggy and limited. No, it has to be about desktop software. They talked a lot about ink flow and zero lag in CAD software but it’s impossible to know how well this can be translated to audio latency and virtual instruments. It’s also impossible to know how well the CPU will cope with real-time audio, effects processing and virtual instrument sound generation. I’m sure it can do the maths but can it do it while maintaining constant, stable, glitch free playback? Or will it throttle because you’re running too many plugins?

Surface Studio is built to be a high performance professional machine, with quad core i5 and i7 processors and discrete Nvidia graphics – that gives me hope that it could be a very capable music making computer.

It has 4 USB 3.0 sockets – that’s 4 times the number on the Surface Pro 4. That says to me that it has every possibility of running an audio interface, a MIDI controller or two and a dongle without too much trouble. But where’s the thunderbolt, where’s the USB3.1 where is that forward looking technology that’s just beginning to make sense on Windows? With today’s Apple event the MacBook Pro is very likely getting a refresh which is rumoured to include USB3.1 ports through-out. It’s such a missed opportunity.

Microsoft should have worked with a company like Focusrite, RME or Universal Audio. They could have shown it multi-tracking with the Focusrite RED 8Pre. They could have placed it in a recording studio, surrounded by gear and flashing lights with someone building patches in Reaktor Blocks with a DC coupled audio interface patched into a Modular synth. Or just a guitar and a microphone into a USB audio interface.

Well, at least it has a headphone socket.

We already have this kind of device in our industry. There’s a few knobs about that let you control stuff in DAW software – Touch Innovations have just released their Kontrol Master thing to do exactly that. Musicians love knobs – the Surface Dial is perfect for it and yet they’ve not partnered up with anyone to showcase it for music production. For parameter entry, for automation, for tempo control, scrolling or scratching – for anything and everything. Would it be capable of MIDI or OSC interaction? It’s interesting how they talked about the pen and how they listened to what people were doing with their other hand and then came up with the dial. That’s good and everything but for me what is still missing from the whole pen experience is the toolbar – just a simple floating, customisable toolbar that gives me the quick commands I need to stay in the creative space. I guess in most drawing programs those commands exist on a touch friendly toolbar – not so in the more complex world of the DAW. But still, the dial raises some great possibilities.

As it stands we simply have no idea whether the Surface Studio can run a music studio. I would love to try it and find out. It’s a beautiful product, with bags of potential for both studio use and live performance. Touchable music software still needs to catch up in places but the Surface experience in my view offers a fascinating and engaging workflow that simply is not available elsewhere. Apple seems to have lost interest in the pro audio market. There’s a lot of slightly disillusioned Mac users out there who are looking for an excuse to switch. If Microsoft can develop an interest in audio production at a pro and project studio level then I believe there’s a market there they could completely corner. But it has to work. The Surface Pro 4 “can” work with the right combination of software and hardware but it’s not automatic or guaranteed – is has to be a done deal with the Surface Studio.

The Microsoft Surface Studio is available for pre-order only in America for delivery just before Christmas. Pricing starts at $2999 for the i5 version with 8GB of RAM and a 1TB drive and goes up to $4199 for the i7 with 32GB of RAM and 2TB of storage. More information on the US version of the Microsoft website.