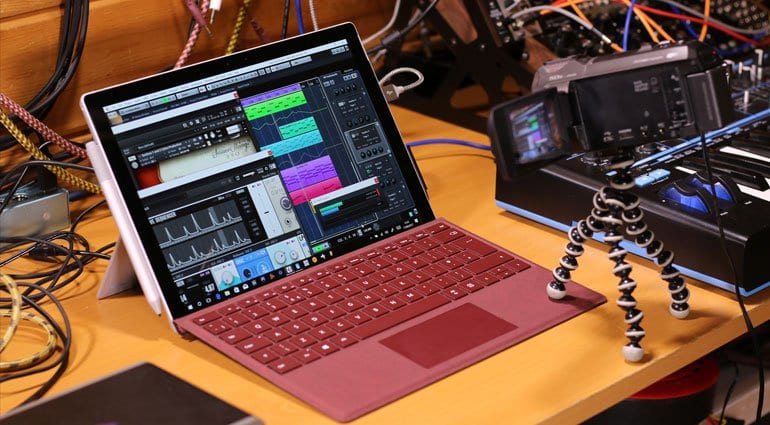 The Microsoft range of premium Surface devices are regularly marketed at creative types. Along with the recent “Creators” update to Windows 10 Microsoft likes to see people making things on their Surface. This often has a focus on drawing and design. But can the latest Surface Pro 2017 also make for a decent music production or live performance machine?

Well, over at the testing facility (shed) at SurfaceProAudio.com (an independent blog) they’ve been putting the Surface Pro through its paces. They’ve just released a video of their findings and it makes for interesting viewing. At just over an hour long, they pack in demonstrations of pretty much every DAW running on the Surface. There’s a focus on the well known Dawbench test giving some plug-in counts. They also stress that these numbers can only be true for this spec of Surface, with this audio interface, at this buffer size.

The testing then moves on to Cubase, noting both plug-in counts and virtual instrument viability and possible polyphony. They demonstrate the playing of software synths from the Arturia V Collection and Native Instruments Kontakt. This covers both CPU based synths and sample based instruments. And finally, it’s all pulled together in the demonstration of a large musical project. It features 16 tracks of audio with 48 plugins, plus 10 virtual instruments featuring Kontakt, Arturia synths and Reaktor.

Two main issues were highlighted. The first is thermal. During some of the Dawbench testing, the CPU speed started to, very slowly, clock itself down. It bottomed out at 1.2 GHz from a starting point of 2.6GHz. The Surface Pro 2017 under test was the passively cooled i5 model. So when the system gets too hot it has no option but the clock the CPU down. They explained that the problem was much more to do with the environment they were in. It had sat for many hours of testing under hot video lights with no air flow (due to noise when recording). They hadn’t encountered it during the majority of their testing and so concluded that the thermal throttling was unlikely in normal circumstances. Obviously, that depends on what’s considered “normal”. To rectify the situation they applied a USB fan to the back of the Surface and very slowly the GHz came back up to a useful speed. Always handy to have one of those knocking around.

The second issue was with CPU stability. The turbo mode on the Surface had a habit of shooting up to 3.3GHz. This made you believe you had more headroom for plugins and then taking that away when you least expected it. The CPU speed would tend to move around a lot when running intensive projects which made results a bit inconsistent. However, they found that if you restricted the CPU to 99% in the power options it would become steady at 2.59GHz. This restriction brought stability but it also meant that the Surface Pro 4, which runs at a steady 2.9GHz when set to full power, fractionally out performs it.

Nothing is certain when it comes to laptops and hybrid devices. When the Surface Pro 4 arrived it was beset with audio glitches, which mirrors the reliability concerns that have recently surfaced. But over time the issues were ironed out. With the new Surface Pro 2017 it appears to be starting from a really solid place where music software operates with decent performance within the limits of the system. Thermal issues are not unexpected with a passively cooled system, so perhaps the actively cooled i7 might be a wiser bet. Silence is good though!

For all the exhaustive detail dive into the video below. And you’ll find more experiences with the Surface and making music on the SurfaceProAudio website.