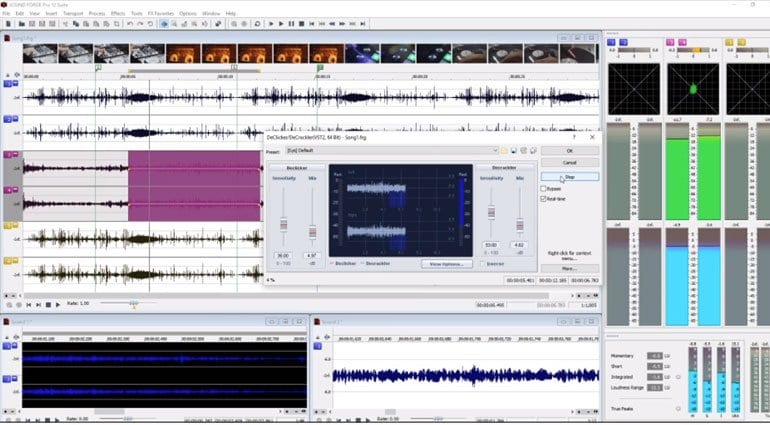 I think it’s remarkable that Sound Forge is still going after all this time. Most DAWs have ample audio editing facilities built in these days. Sony never managed to do anything creative with it when they bought it from Sonic Foundry in 2003. When Magix picked it up last year I thought it might disappear but here we are with a brand new version 12.

It looks remarkably the same. Which is probably no bad thing for long users like myself. But Magix has put something of themselves into it like they did with Vegas and the entry-level version of Sound Forge. Sound Forge Pro 12 is now 64bit and can use all of your computer’s power and memory. With its history as a stereo audio editor heading back to before the millennium computer power and memory are things it really hasn’t ever needed. But it’s good to have it. VST3 effects support is now built in which keeps it nicely up to date with the world of plug-in development. They’ve brought in some dithering algorithms from POW-r and it now supports more file formats (yawn).

Maybe the biggest change is that Sound Forge can now record up to 32 channels of audio simultaneously, in 64bit and up to 384kHz. That’s why it needs access to more of your computer’s power.

The effects have had a long overdue overhaul. They did tend to look a lot like office productivity tools. The uncompromising Wave Hammer compressor is now version 2. Along with new versions of DeClipper, DeHisser and DeClicker they actually look the part of being the usable, professional tools they’ve always been.

For a load more dollars you can go for the full “Suite” version which includes sonically graphical SpectralLayers Pro 5 for visually representing your audio. On top of that you get an awesome bunch of high-end audio plug-ins including an Analogue Modelling Suite, some Vintage Effects, a huge reverb and some guitar/bass amps.

Sound Forge Pro 12 has earned its right to be the best audio editor on the PC and I’m very happy to see it continue to develop while remaining serious and true to its roots. £299 for the regular version, £449 for the Suite, or you can sign up for £11.99 a month for Sound Forge Pro 365.