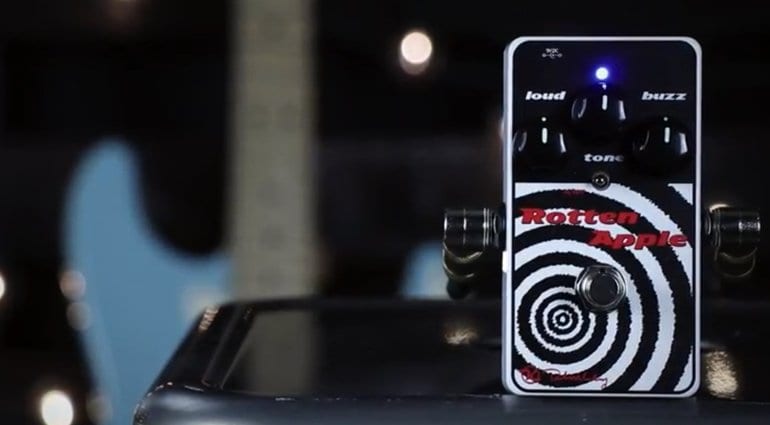 The Keeley Electronics Rotten Apple Fuzz is almost all the ’90s Billy Corgan fuzz tones in one simple little black and white box. The Pumpkins association is so strong it even has a concentric circle graphic similar to the one used on the band’s classic ‘Aeroplane Flies High’ EP box set.

Three simple controls are labelled Loud, Buzz and Tone. They control the OpAmp-based fuzz circuit, and provide exactly the control you would expect from this style of fuzz. On top of the three basic controls you also get a three-way mini-toggle switch with the positions Full, Flat and Scoop. Each affects the tone stack in a different way. The Full mode adds some bass, while the Scoop mode removes some mids. The middle Flat position leaves the tone stack unaffected. 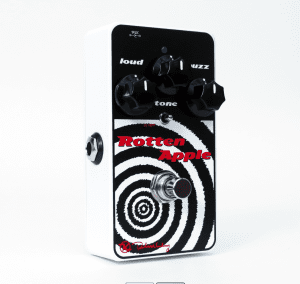 This bass heavy, mid-cut fuzz was allegedly tested extensively with a Stratocaster loaded with Lace Sensor pickups, which is exactly what Mr Corgan used throughout that era in the Pumpkins. Now, I’m a huge Pumpkins fan and adore that era of the band, so I will be checking one out myself pretty soon and putting it through its paces.

Of course, other fuzz pedals are a lot more versatile. This one is limited in its appeal to Pumpkins fanboys like me. If you want thick, cutting fuzz tone and like a more aggressive fuzz, you may want to listen to the official demo video below. Yes, it is full of Pumpkins riffs!

24 Oct · Why are you trying to sell me stuff while showing this. Knock it off. We're tired of it