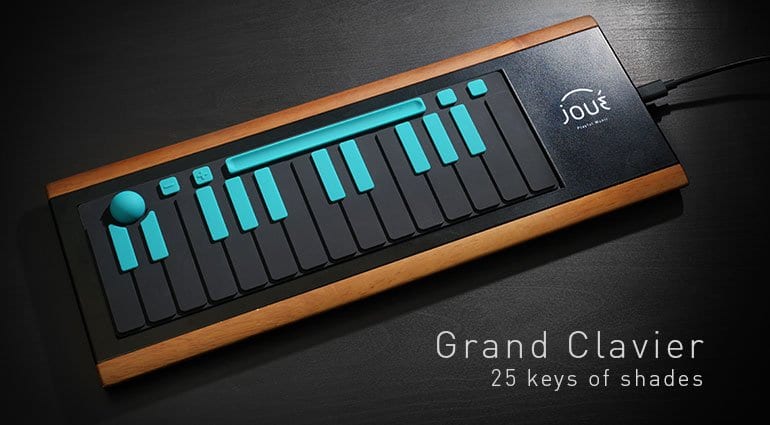 Joué is an interesting MIDI and MPE controller that can be reconfigured with modular controller parts that sit on the Joué board. There are slider modules, drum pads, controllers and up until now a two-thirds width 1-and-a-half octave mini piano keyboard. But now they’ve announced Grand Clavier, a 25 key mini keyboard that spreads itself over the full surface.

Joué is made up of 3 zones. Each of the controller modules takes up either 1, 2 or 3 of these zones, which lets you put a single zone 4×4 drum pad next to a 2-zone fretboard. You can mix and match them together to form the perfect controller for what you’re doing or change them about mid-set so you can take advantage of many combinations. The magic of Joué is that each module remembers it’s own settings and MIDI assignments so as soon as you drop it on the Joué it’s ready to play from where it left off.

The 2-zone mini keyboard was probably the least cool module. While others were innovative and completely appropriately sized the keyboard felt small and fiddly. With Grand Clavier they’ve stretched the keyboard all the way across the 3 zones and increased the range to 2 octaves – much more manageable.

The rubber type material offers lots of expressive possibilities. Along with initial velocity, it will also handle pressure and timbre change as you push your finger forwards and backwards. These are the requirements of MPE (MIDI Polyphonic Expression) of which the Joué is compatible. A Glissando mode allows continuous pitch-bend between notes for some microtonal action. Along with this module comes a custom UVI Sound Pack with MPE expressive presets from acoustic instruments to electronic sounds. 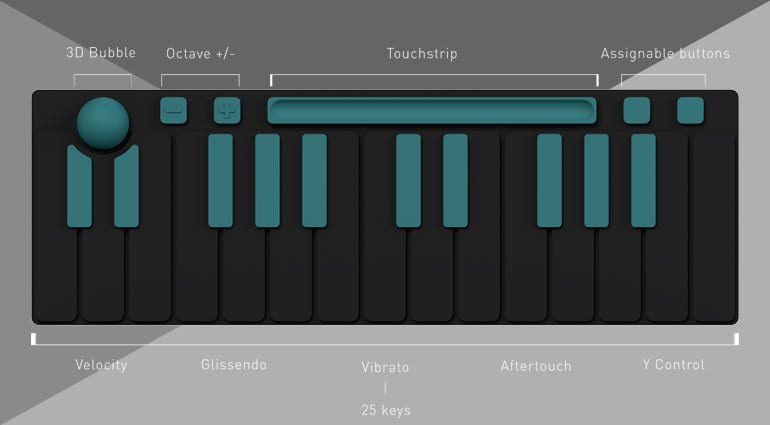 The Grand Clavier along with the re-Connect cable that allows the Joué to connect directly to a MIDI hardware synthesizer without the need of going through a computer, are being launched at a party on the 24th November at Modularsquare in Paris. The Grand Clavier will be available for sale on the 3rd December.