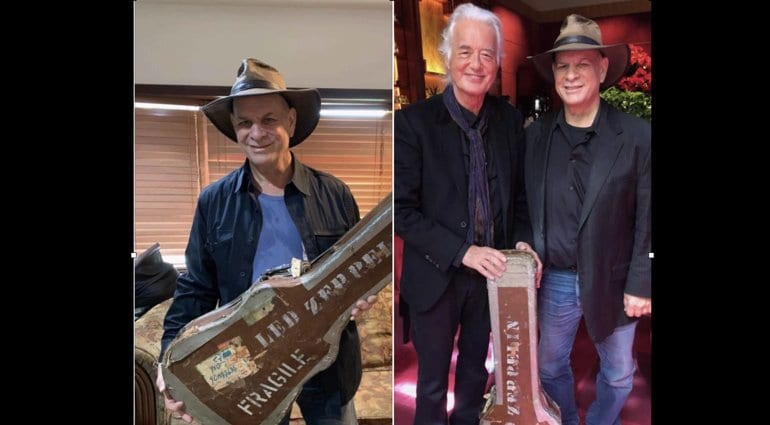 47 years ago, while on tour in the USA, Jimmy Page lost a case that held his Number 1 Gibson Les Paul. Now the former Led Zeppelin guitarist has been reunited with his long-lost bit of guitar gear, thanks to the intervention of Jeff Curtis, a Led Zeppelin fan.

According to Jeff, he was gifted the case by Zeppelin’s roadie Mick Hinton (John Bonham’s drum tech) when he helped pack up the bands gear after a show the band had just played. He writes in his Facebook post:

After the few minutes it took to pack up the drums, [Hinton] says to me, ‘You can have that.’ I was speechless, to say the least! ‘Where will the guitar go?’ He took me over and showed me Jimmy Page’s number one Les Paul guitar in its brand new anvil road case. The case I was given was being discarded that night since its back was crushed and no longer afforded protection to the guitar. Talk about being in the right place at the right time! 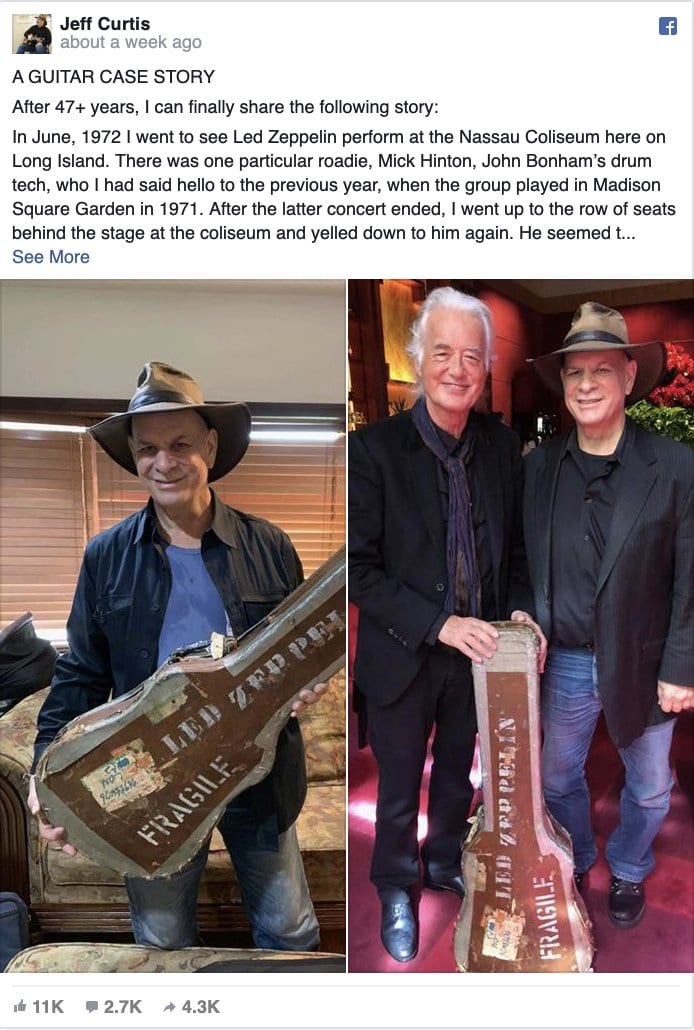 Now fast forward to 2019. In July, Jeff went to the Play it Loud exhibition at the Metropolitan Museum of Art, Manhattan.

There he saw one of Page’s guitars on display and it gave him the idea of getting in touch with Page through the curator to give him back the ‘lost’ case. After the exchange of a few emails and a month later, Curtis received word that Jimmy wanted to meet with him to get his long-lost guitar case back at last.

The two met in hotel in New York and Curtis presented Page with his long lost guitar case:

“I gave him copies of both my CDs, which he said he would listen to. He also had brought me a special limited box set edition of Led Zeppelin 2 and signed its book as well as another book I had brought with me”.

So now the rockstar has got his old case back for his Number I Les Paul. Now he can chuck that old Anvil case out…

One response to “Jimmy Page reunited with his Number 1 Les Paul guitar case – after 47 years!”