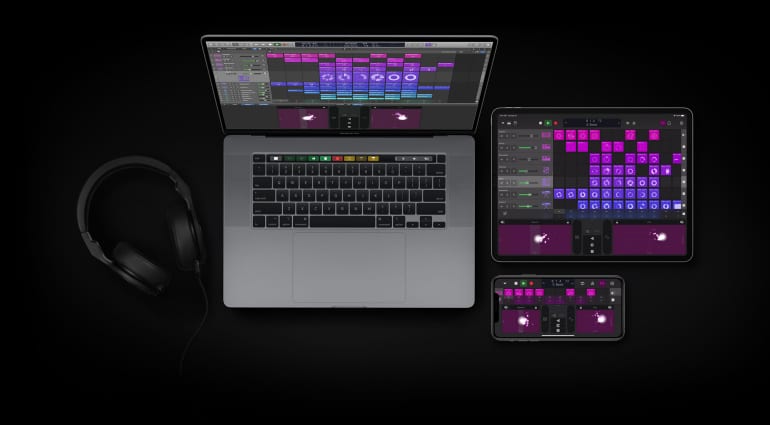 How to Optimise Your Apple Mac For Making Music with a DAW  ·  Source: Apple

Apple computers have been popular among musicians and recording studios for many years, as they provide a solid base to create a virtual recording studio with. This is the first in a series of articles on buying, optimising, and setting up an Apple Mac system for music production. In this article I will show you how to optimise your Apple Mac for making music in your chosen DAW, and what to look out for when you are purchasing a Mac for this purpose.

How to Optimise Your Apple Mac For Making Music

I’ve been using Apple Mac computers for music production for 30+ years. During this time, I’ve learnt a thing or two about how to set them up. In fact, I spent 10 years selling pro audio production systems for a living, plus another 15 working for Apple. I’ve set up more Mac computers for professional studios and musicians than I can remember. So I’d like to share my top tips for getting it right the first time with your Apple Mac.

With every Apple Mac there are three main areas of consideration: the CPU, RAM, and HD Storage. Each plays a vital part when working in your DAW. The way Apple sells its computer systems means that some of these components cannot be changed and are fixed directly to the main Logic Board, so you cannot upgrade them after you have purchased the Mac. 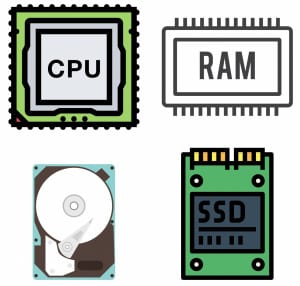 The CPU is the ‘brain’ of your Mac, and has a clock speed and a number of cores. Most clock speeds on the current Intel Macs are somewhere in the 3.00 – 3.5 GHz range. In multiple CPU computers, each is called a core. As musicians, we should always be aiming for 6-core and 8-core CPUs, where budget allows. This will give you plenty of power to process complex tasks in real time, which is what making music in your DAW is all about, computationally speaking.

Some CPUs also have a feature called hyper threading, which effectively doubles the number of cores at your disposal. Be on the look out for these if you are interested in investing in a new Mac system.

As a musician, Intel i7 and i9 chipsets for your CPU are ideal These will give you enough power to handle larger, more complex productions. If you are working on small projects with minimal track counts and only a small number of virtual effects plugins, you can often get away with just an Intel i5 chipset. But honestly, I would always suggest you bite the bullet and go for an i7 CPU at least. It will last longer and give you a better return for your initial investment.

Apple has announced that it will be moving to its own ARM-based CPUS. But that won’t be for a little while, so we will be focusing on its current models in this article.

An Apple Mac’s RAM is your working area; it is where the CPU puts tasks it is working on in real time. For music production, you want a minimum of 16GB of RAM, or you will struggle. If buying a MacBook Pro, for example, you should always try and budget for as much RAM as possible. If you can afford more, then go for it.

Unfortunately, Apple laptops, smaller iMacs, and Mac Mini cannot be upgraded with more RAM later. So it’s a good idea to try and get one with as much RAM you can. I run 32GB of RAM in my MacBook Pro.

Regarding storage space, you will often see something like 1TB or more with desktop machines, or perhaps 256GB or 512 GB on offer with laptops. There are two main formats: mechanical drives, often known as HD, and SSD (Solid State Drives). With music production you want a 7200 rpm mechanical drive as a minimum. Slower HDs may give you audio dropouts and poor track playback on audio projects. That’s not good.

A mechanical hard drive consists of a set of spinning disks inside an enclosure with multiple read/write heads that scan these spinning platters. Because they are mechanical, they are also easier to damage from being dropped or knocked hard, so you need to be careful with them or you they corrupt your data if damaged. 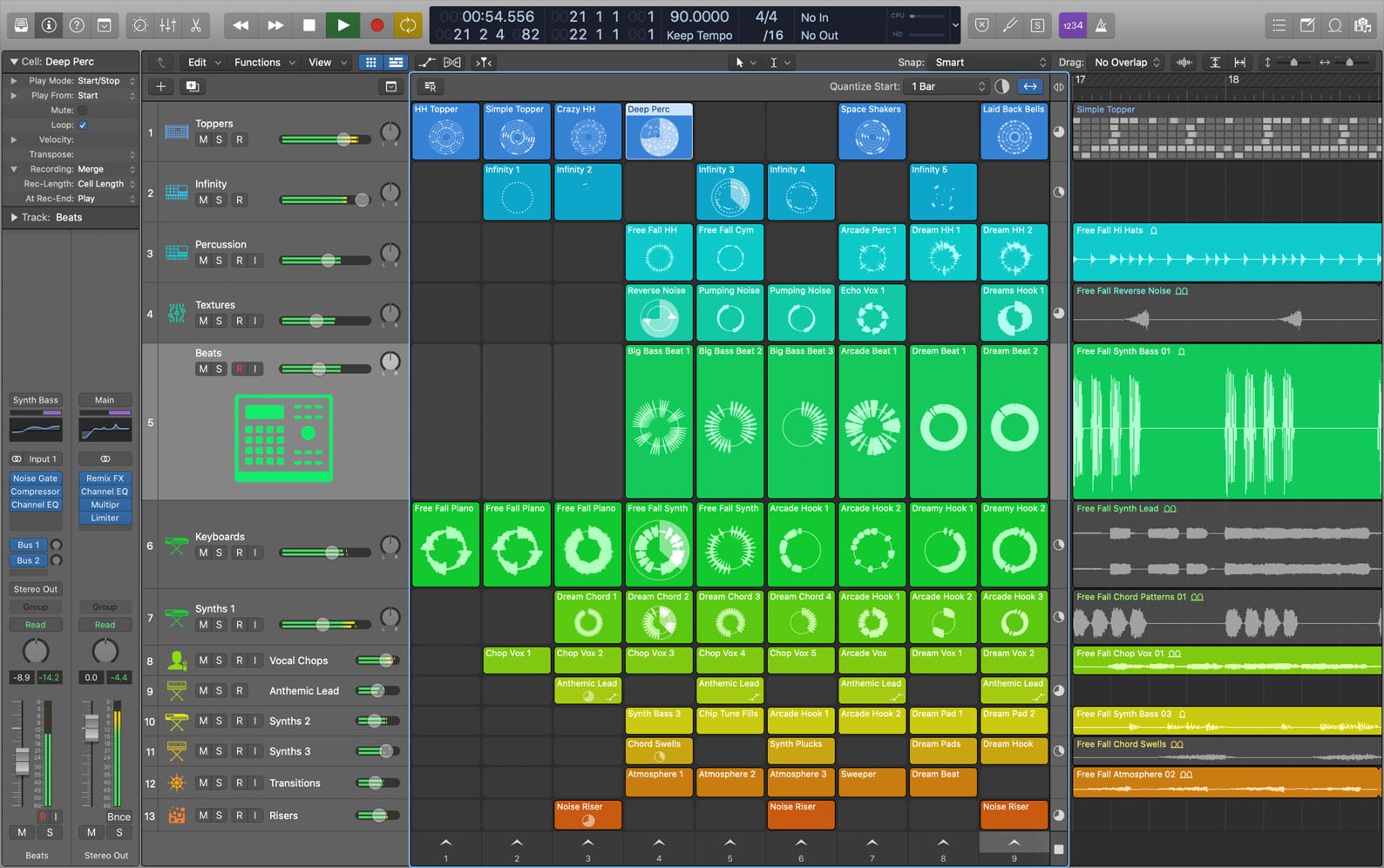 All those sample and loops can fill up your Startup Disk, so put them on their own external drive

The SSD storage Apple uses is on a chip, often soldered to the computer’s main Logic Board. This cannot be changed. Although hard drives can sometimes be swapped out, it isn’t a simple task and could avoid your warranty.

SSD drives are a lot faster, but they cost a bit more than traditional mechanical HD drives. However, prices are dropping continually. As musicians, we tend to use external drives to record our projects onto. We can always add a fast external storage device to our Apple Mac after we have purchased it. Make sure the internal storage is either an HD running at 7200 rpm or more, or an SSD. This where our DAW will be running from, so it’s a vital part of your system.

How To Set Up Your System

Think of your Apple computer as an physical recording studio. Some simple housekeeping rules will keep everything runnning smoothly. Like a recording studio, your DAW needs space for all the virtual instruments, effects and more. You should have a minimum of 500GB of storage space on your HD or SSD.

This will hold your Apple OSX operating system, your DAW like Logic Pro X, Ableton, Pro Tools or Cubase, and any third party plug-ins you decide to add to your studio for example NI Komplete, Waves or IK Multimedia. You may also have separate audio editing software. Your Mac will also have things like Mail, Calendar and Safari installed as well, and although you may not use them they are part of the system and take up some space.

The internal drive is what we call the Startup Disk or System Drive. It is where all your programs live and run from. Keep it tidy, do not partition it and, ideally, keep some of it completely empty. We don’t want to fill the internal drive completely or the Mac will slow to a crawl. As a rule of thumb, aim to leave at least 20-25% of it empty.

The reason is that your Mac uses that space to move information around. If the drive is chock a block full of data, that gets very difficult. An analogy I’ve often used in conversations with customers is decorating in a room full of furniture. It slows you down and makes it a lot harder. If you have space to work, you can get the job done a lot faster. 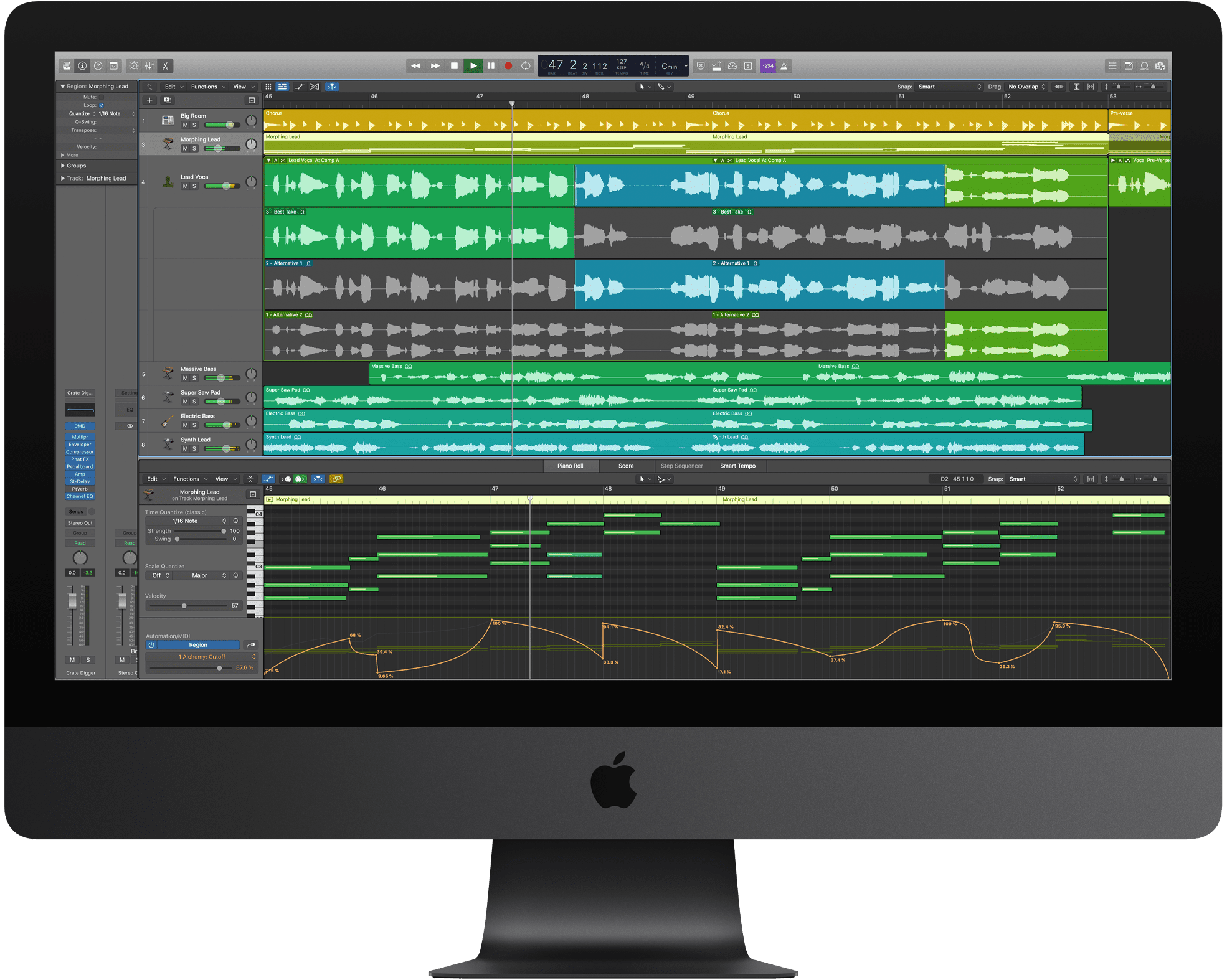 Your Startup Disk contains OSX, your DAW and plug-ins, but ideally not your song files.

This gives your Mac plenty of room to work with and stops your main Startup Disk from filling up too quickly. Keep audio on external hard drives, and samples on another external drive. Remember, you will probably need a third drive at some point to back up everything you have created. Hard drives are continually getting cheaper. At the time of writing, a 2TB external 7200 rpm hard drive is roughly £100. This would be enough storage to record a whole album on. It works out a lot cheaper than magnetic tape.

DAWs often store your work as a session or project. You should get into the habit of backing these up when you have finished. Each session or project consists of a session or project folder, which contains the session/project file all the audio files, arrangement data, virtual instrument and any other samples referenced to create your song.  Never remove any audio files from this folder. When creating a backup, back up the entire folder or your song may become corrupted.

Your DAW will allow you to set up an audio recording path. You should place your session or project audio files and all the song session data on your external hard drive. This will keep everything neatly in one place, making it easier to find and to back up. Another advantage is that , you won’t fill your startup disk straight away. Audio files take up a lot of space and will fill your Mac’s system drive ups very quickly.

Back up, Back up and Back up.

I have seen so many musicians lose their precious music because they haven’t backed up their data. If something is important to you, like your latest masterpiece, make a back up. Hard drives are cheap and there’s no excuse not to have at least two copies of your work. That’s especially true if you are charging for your services, where I’d go as far as making multiple copies of the session or project folder.

Don’t Scrimp (Where It Counts)

If you are buying your first Apple Mac, you should budget for the fastest CPU with as many cores as possible and as much RAM as you can afford. You can always buy external storage afterwards, but go for a minimum of 500 GB for your startup disk and you should be fine. Remember: you cannot add a faster CPU or more RAM to most Apple Mac computers. An exception is the 27″ iMac, which lets you add more RAM to after purchase. That’s preferable to buying an ‘underpowered’ Mac that won’t do the job, wait save up a little extra and get the right machine for audio production.