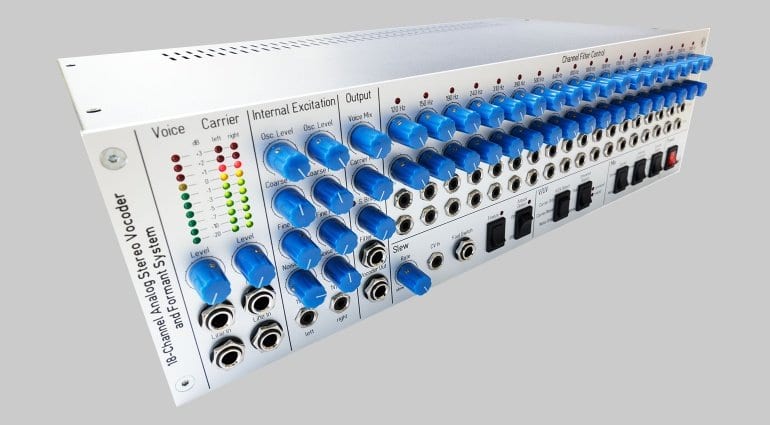 If you’re looking for an analog studio vocoder, there is now a promising new option. The Hoerold VoIS has 18 frequency bands and comes with a stereo mode, among many other features. But do make sure that you’re up for the task: You’ll have to build it yourself, and it is definitely one of the more challenging DIY projects in music electronics.

Ever since it was included in hugely popular synths like the microKORG series, the vocoder effect has seen a new surge in popularity. But analog vocoders are rare. Most of the recent developments have been digital emulations of the classics, such as the Roland VP-03, or entirely software-based. It looks like the Behringer VC-340 is finally about to arrive in the stores, but that’s yet another Roland clone and doesn’t really add anything new to the story.

So what if you wanted a truly analog hardware vocoder with a unique concept and set of features? You could fork over an obscene amount of money for a vintage unit. Or you could set your hopes on new developments by Wavefront Audio and GRP, both of which have recently announced that they’re working on something. The third option is: Build it yourself! And that’s where the Hoerold VoIS comes in.

The Hoerold VoIS was developed by “Glubsch”. The first thing you should do to familiarize yourself with the project is read the thread on Muffwiggler. It is an 18-band vocoder with two oscillators, patchable bands and adjustable slew rate. Judging by the video, it does everything from classic robot voices to Kraftwerk to all sorts of noisy goodness.

Dig a little deeper and download the documentation, and you’ll get an idea of the scope of the project. You’ll need a good deal of time, experience and dedication to accomplish this build. The bill of materials (BOM) contains no less than 3,990 components, the price of which adds up to roughly 830 Euros. This doesn’t include the PCBs, enclosure and front plate. You’ll also need access to lab equipment such as an oscilloscope and sine wave generator. It’s definitely not a project for beginners or the faint-of-heart! But the bigger the challenge, the bigger the reward. In this case, that could be an analog vocoder that’s even more rare than the vintage classics.