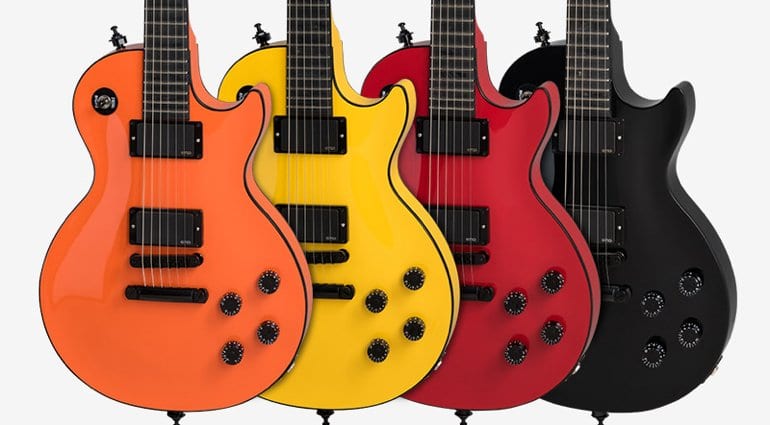 These Les Paul Customs have a traditional 24.75″ scale length mahogany necks with Richlite fretboards loaded with medium-jumbo frets and have the ‘Blacked-Out’ pearl block inlays and they use a graphite nut instead of the usual Corian.

The part which really jars for me is their matching brightly coloured headstocks, with black ‘double diamond’ classic Les Paul Custom logos with a matching black binding around the edge. Given the expectations we tend to have of Custom Shop models, to say they look ‘different’ would be an understatement. Will people like these? 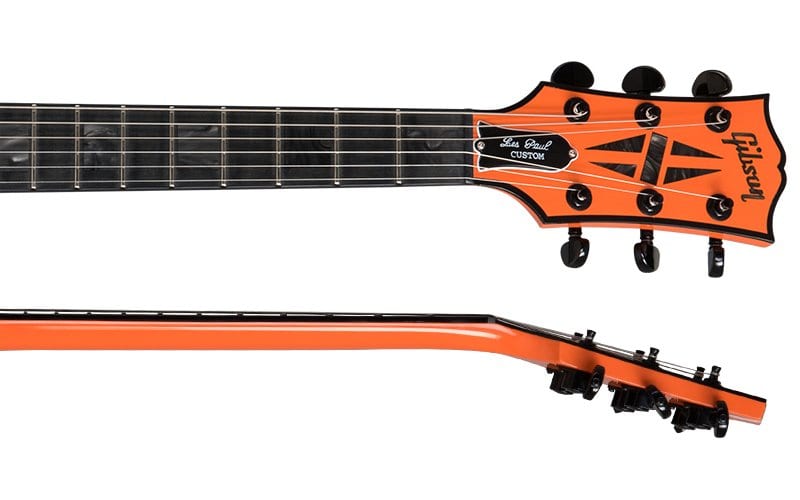 The guitars come loaded with a set of EMG active pickups, namely an 81 in the bridge and an 85 in the neck. The guitar requires a battery, but you get the benefits of having active pickups. All the hardware and EMG pickups are black, so this is probably where the ‘Blackout’ element comes from.

Personally, I believe if this had been an Epiphone Les Paul Custom then I could accept it for under $1000. However, at this price point, I cannot understand who would actually buy this guitar. You’d need deep pockets and have to either be colour blind or have little to no taste. It’s not the colours per se; we reckon the aesthetic just doesn’t suit the Custom Shop brand. The bright colours – especially the orange and yellow colour schemes look like something from 1990’s Pop/Rave Culture, it’s not quite the current trend for retro ‘tongue-in-cheek’ ’80s fluorescent.

It’s all a matter of personal taste, but I think they look like cheaper guitars. Now, it is easy to knock Gibson these days, as we all know they are having financial difficulties and that there has been talk of poor management decisions for quite a few years now. But I think that guitars like this really do not help.

14 days left
BUTE Loudness Normaliser on sale for 75% off

9 days left
Reason Studios May Madness: save 33% on Reason 12