During a recent interview with Guitar Magazine, Gibson CMO Cesar Gueikian admitted that the controversial Play Authentic video was his idea. As you may recall, the video attracted a lot of negative attention. Its presenter, Gibson Director of Brand Experience Mark Agnesi, faced most of the heat. Now it turns out that it wasn’t his idea at all!

Cesar Gueikian: “It was probably my biggest mistake”

Here’s an excerpt from the interview:

“Mark Agnesi is one of the most knowledgeable and amazing Gibson guys, and I’ve learned so much from him over the years as his client – I’ve got a lot of vintage Gibsons from the 50s and 60s that I bought from him. And I always relied on him for knowledge, because I’m a nerd and I want to learn things.

“But I personally made the mistake of having Mark do that video, and if you ask me what I’d like to have done differently, it’s that. At the end of the day, our objective is for us to protect our fans, and when someone buys a Gibson they expect the quality of a Gibson, and that’s a good thing.

“But using social media to try and deliver the message was probably my biggest mistake, and in hindsight, I think I shouldn’t have done that. What I was trying to do… I didn’t see it as us being ‘threatening’ or anything like that.

“We want our fans to buy our guitars because they believe we are making the highest quality instruments and that they are made to a higher quality standard than any other manufacturer. And all we wanted to do was to protect them from anything that could be misleading.” – Cesar Gueikian 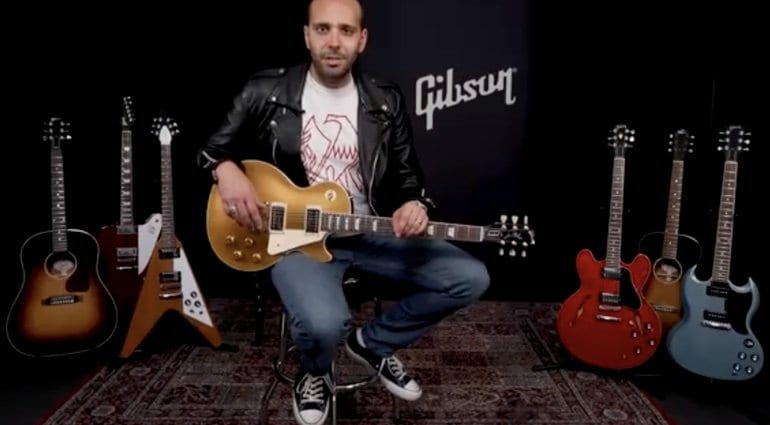 This is the first time someone at Gibson has directly taken responsibility for the Play Authentic video. Last year, Gibson said in a press release that there were “lessons to be learned around [the] tone” of the campaign. However, it has taken 7 months for Gibson to acknowledge directly that this thing should never have happened. But it’s refreshing that Gibson is listening and trying to rebuild the trust of their audience. It was always going to be a hard situation to crawl back from. Especially in the age of social media, with all the YouTube commentators ready to give their opinions on the Play Authentic message. I’d wager that Gibson will be a lot more cautious with how they proceed online in the future.

These guys are dweebs. I don’t know how they weaseled their way in to these jobs but I think they are full of it. Maybe make some actual high quality instruments and people will think that is what you do. Every year it’s the same old shit, same old specs, same old finishes. How many times are you going to make a “59 reissue, reissue, reissue?

People that actually play don’t want a $3000 Les Paul to hang on the wall of their office because it makes them look cool. Get some cable shielding, stainless steel frets, satin neck finishes, locking tuners for the love of god, an actual nut and it’s about time you fix your fucking head stock angles.

Take care of all of that and then you can talk about building high quality guitars.