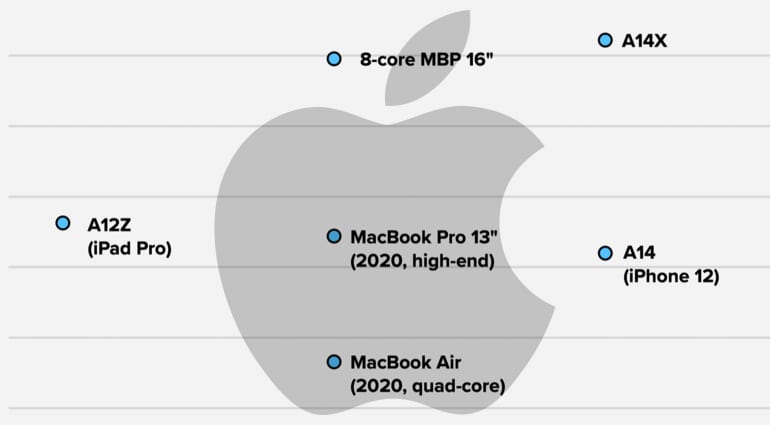 Shortly before tomorrow’s (Nov 10) upcoming Apple event – One More Thing – Apple Insider published the first Geekbench 5 benchmark test results for the new, in-house developed A14X processor. An advancement of the A14 Bionic processor humming inside the iPad Pro and iPhone 12 series, this is the chip that’s most likely to power Apple’s first consumer ARM Macs, whose official announcement is expected tomorrow.

Looking at the numbers, they pretty much speak for themselves! With 7220 points (multicore performance), the A14X’s performance is above that of the flagship 16-inch MacBook Pro 16 with its 8-core Intel i9 CPU (6869 points). This sure sounds promising, especially considering this is Apple’s first try at a proprietary ARM-based notebook/desktop platform. Here is the graphic (courtesy of Six Colors): 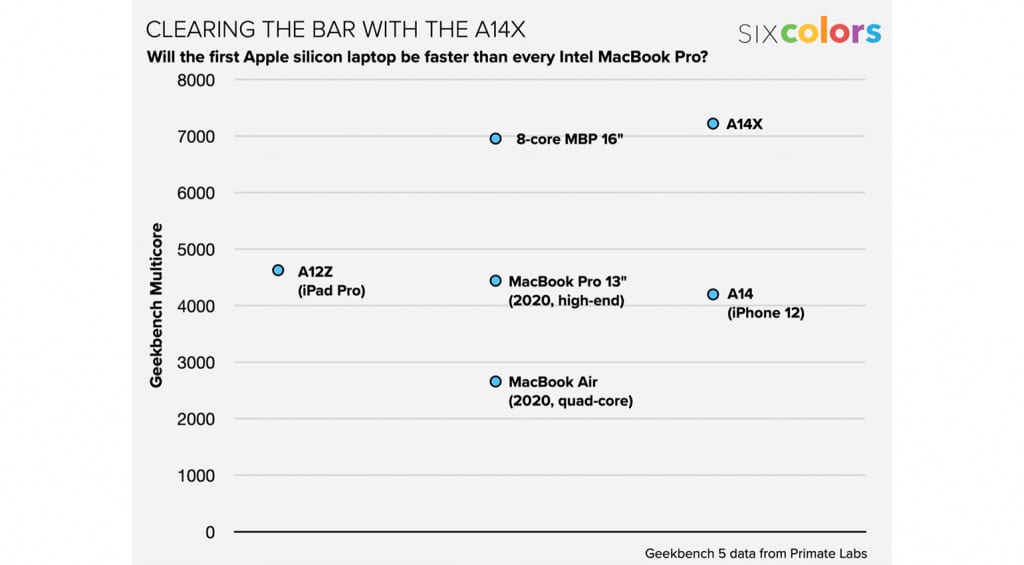 At tomorrow’s event, Apple is expected to reveal its first consumer Macs running ARM-based processors. These are reportedly a new MacBook Air and a new 13-inch MacBook Pro 13. A 16-inch MacBook Pro and a 21-inch iMac with ARM processors are rumored for next year (2021). Early rumors predict different, 12-core chips for these, which are said to be still in the making.

Apple intends to transition its entire computer line-up to ARM processors over the coming two years. In the meantime, “years” of full software support are promised for Intel users. So chances are there’s still plenty of life left in your Intel Mac. Regardless of your Mac’s processor, we assume that owners of both will have to go through a transition phase that’s mostly in the hands of software developers. All macOS software will have to be rewritten and optimized (or emulated very well) for the new system. Personally, I am optimistic about this, but as an Intel user, I will certainly dread the day I see some important update or hot plug-in is “ARM only”. Let’s hope that won’t happen much too soon.

The trade-off for this is that all those amazing iPad music apps will run natively on the new Macs. As long as you have a trackpad on hand, I don’t see the translation of touch controls being an issue at all! Add to this the rumoured price reduction, a gesture of Apple passing along the savings it makes on hardware to consumers, and there’s actually lots to be excited about those new machines.