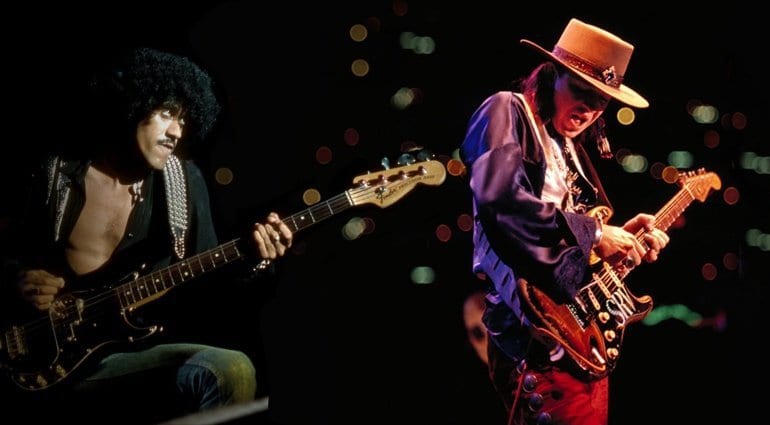 News from the Fender Custom Shop for 2019: Fender has unveiled a limited-edition Mid-Year Collection, with signature models for Phil Lynott (Thin Lizzy) and Stevie Ray Vaughan. All instruments are handmade in their USA Custom Shop facility. It’s all pretty similar to releases we’ve seen in previous years, quite ‘middle of the road’ and safe. But at least there are no more Game Of Thrones models in there!

Rock god Phil Lynott (Thin Lizzy) would have celebrated his 70th birthday this year. The first thing you notice about this new bass is: no relic work, no decorations. It’s modeled on his 1978 Precision and unlike all other Fender Custom Shop 2019 models, this bass looks, well, kinda boring. Lynott, after all, was known for a neat handling of his bass. But it does have the typical mirror pickguard and the Badass II Bridge. 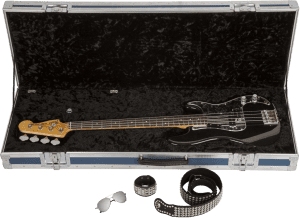 “Built for true fans and aficionados”

Fender says it’s “built for true fans and aficionados.” That’s their justification for charging the insane price of EUR 13,449 * Built by John Cruz and limited to 60 pieces worldwide, this bass comes in an Anvil tourcase with the Thin Lizzy band logo, mirrored pilot sunglasses and the characteristic studded belt and matching bracelet.

The second bit of big news from this collection is the Stevie Ray Vaughan Signature Stratocaster. Actually, this guitar has existed in standard form since the early 90s. SRV collaborated on the standard production run before his untimely death and it has remained a popular model ever since.

Fender has breathed new life into this model in the form of the NOS SRV Custom Shop guitar. You get a two-part alder body and a maple neck with an oval C-profile. The Faded 3-Color Sunburst paint job has been tastefully aged. Three handcrafted Custom Shop Texas Special pickups provide a fiery sound .

A huge fan of Jimi Hendrix, Vaughan used the bridge of a left-handed guitar to play the tremolo with his right forearm. This detail was considered true to the original and has appeared on all the Fender variations of this SRV model over the years.

The Ingredients: A roasted body, 60s feeling and Josefina Campos’ Poblano pickups. Pretty similar to the last version, but now with a roasted body and a black paint job. Meh.

The ’55 Dual Mag Stratocaster has a faded and aged Journeyman Relic finish, Strat 1/2 Blender wiring and Greasebucket tone control. The magnets for the high strings are Alnico 2, with Alnico 5 for the bass strings. All pickups are wrapped in copper and grounded.

This is neatly modified tele with 50s vibes, including a few special features like a Bigsby tremolo and an HS pickup configuration.

Last but not least, we have a Paisley Jazzmaster Journeyman Relic. Created in 1968, the paisley finishes were inspired by San Francisco’s “Flower Power” movement and first appeared on a telecaster. FCS has made a pair of Paisley Jazzmaster guitars, one in classic pink paisley and one in black, both with a matching nitrolated paisley pickguard. The hand-wound pickups and an RSD Jazzmaster Bridge complete the 2019 line-up. 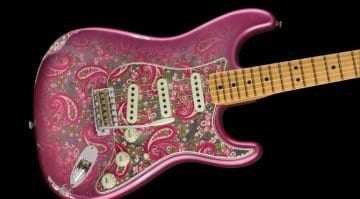