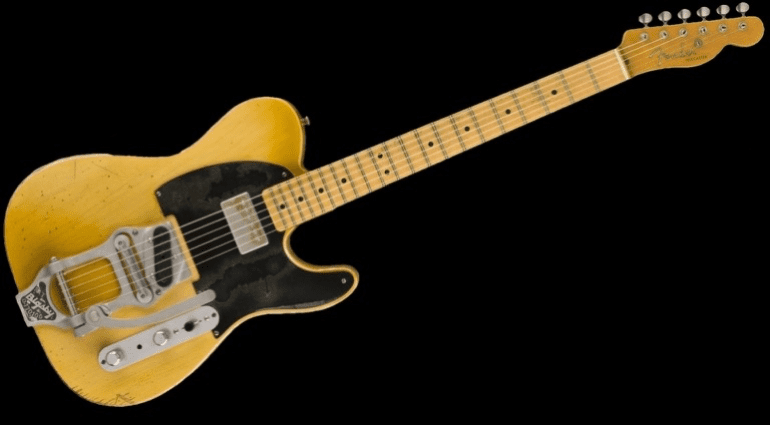 The new Fender Custom Shop ‘Son of the Gun’ Telecaster celebrates Bob Bain, who played with such acts as Frank Sinatra, Ray Charles and Quincy Jones. This instrument, though, is to be produced only in very limited numbers, so most of us will never get to play one…

So, who’s Bob Bain again? This is the guy that played on the original Mission Impossible and Batman TV Series theme tunes and did 22 years on the Tonight Show! He also played with a string of music legends during his long and glittering career. He is 91 in the picture below and I think it is really great of Fender to recognise his fantastic contribution to electric guitar playing.

Fender Custom Shop seem to have done a pretty convincing job of recreating Bob’s original guitar. The two-piece off-centre select ash body is what you would have had on those old ’53 Telecasters. The maple riff-sawn neck has a traditional ’50s ‘V’ shape and the vintage-correct 7.25” radius fingerboard. Bob’s modifications include a Bigsby B16 Trem unit. The guitar is loaded with a Fender Nocaster 51 Singlecoil in the bridge and a Seymour Duncan 59 in the neck position, so looks very ‘Keef’ too! It also sports a relic lacquer finish. 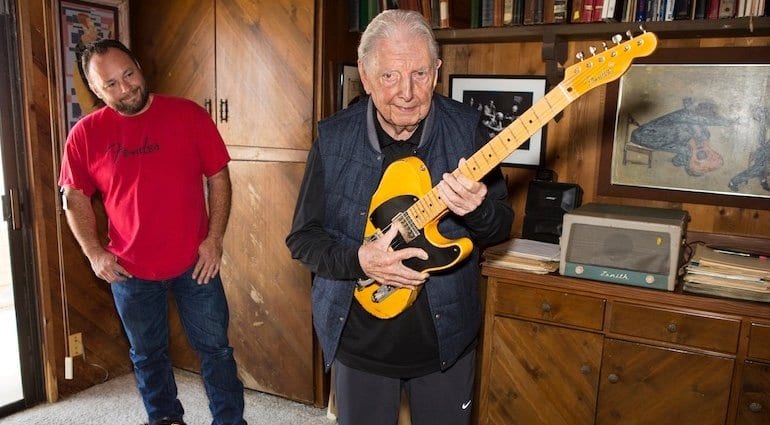 This is obviously a vintage-inspired guitar from start to finish, including Bob’s session musician ‘upgrades’ which helped him to get the tones he was after. I’m definitely a fan of this guitar. But I wish it wasn’t so damn expensive (we’re expecting a price just shy of $3000 on this one), and also such a limited run. To be fair, you could just buy an old Telecaster and do the mods yourself if you really want to get the look. As for the feel, well, that is normally where the Fender Custom Shop have the edge on most of us and I suspect it will be a fun guitar to play.

It’s a pity I will probably never get to try one out, though, as the chances are they will all sell directly to collectors. But I do love the look of it and it will appeal to a lot of players. Will make more in the future?

The Bob Bain Telecaster Available from April 4th. a total of 30 guitars from select Fender Dealers 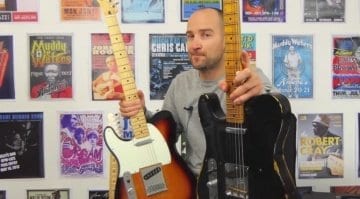