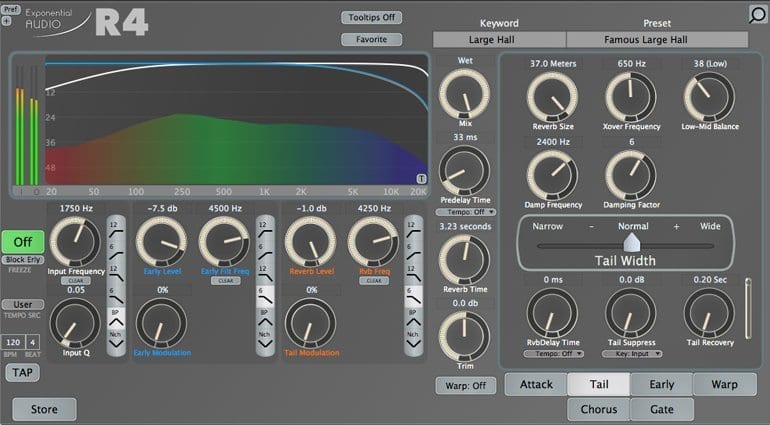 Released today, R4 is Exponential Audio’s new reverb plug-in. Like their popular reverb plug-in Nimbus, R4 is also designed by ex-Lexicon engineer Michael Carnes, responsible for many classic reverbs. This is described as “the next reverb in this royal lineage”. Should be good, then!

There are a couple of things to appreciate about R4. Firstly, while this may be the next reverb released by the company behind the well-regarded Nimbus, R4 is very different. Nimbus is a very ‘transparent’ reverb, but R4 has been designed to be colourful. As a fan of convolution reverbs, this sounds like good news as I’ve always got an ear to the ground for an algorithm-based reverb which can emulate spaces. Secondly, although there is the connection here to Michael Carnes and his ‘legacy’, R4 isn’t trying to emulate any of the classic reverb sounds. I think Exponential Audio might like us to believe some presets sound similar, which can’t be a bad thing, but they are entirely new algorithms.

Although the design of the user interface isn’t the most colourful, I actually quite like it. I think it’s laid out well with a lot of powerful features. The control over early reflections and tail while letting you filter these independently isn’t new, but R4 presents these well. The ‘warp’ and freeze features are very attractive, highlighting the creativity that Exponential Audio are trying to demonstrate with this plug-in.

The addition of early and tail EQ modulation is quite interesting and follows a trend I am noticing in modern mixing. It’s as if the side chain technique has given way to modulating EQ. EQ filters can be dynamically controlled to create an effect, or to avoid saturating a mix. Albeit in a slightly different manner, we saw Zynaptiq take this idea to a new level last year. Their Adaptiverb plug-in actually calculates a tail based on a track’s harmonic content. I wonder if Exponential Audio will also develop something along these lines in the future with their modulating filters.

There’s a lot for Exponential Audio to be proud of with this new plug-in. The examples I’ve heard so far sound good. However, I look forward to trying it for myself as it almost sets off alarm bells in my head. Is it too good to be true? There are all these excellent features with claims of legendary reverb sounds, and yet it doesn’t seem to demand much CPU power. Many top mix engineers still rely on their very expensive dedicated hardware reverb units. Reverb is such a critical element to a mix and can very quickly sound ‘cheap’. Have Exponential Audio really cracked the code for a successful algorithm plug-in based reverb?

R4 has been released today for 299 USD / 289 EUR. Existing Exponential Audio customers can ‘upgrade’ (which I really think means ‘purchase’) R4 at a discounted price of 150 USD, provided you own another product of theirs. This is certainly set at a price point amongst professional plug-ins, as we would expect, but that’s much cheaper than any ‘classic’ hardware reverb. For more information visit the R4 in-depth webpage, or the product page to purchase.

From the Exponential Audio YouTube channel, here’s their R4 introduction video. Amongst the marketing hype, this video provides a concise overview of what is quite an in-depth plug-in. 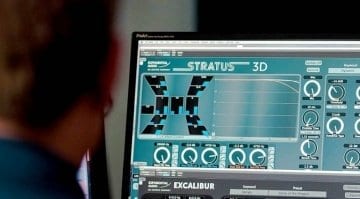 iZotope cures its GAS for reverb with Exponential Audio acquisition 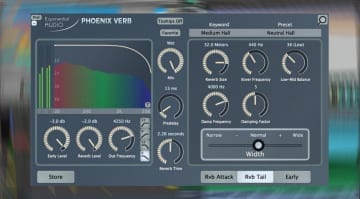 Deal: Get 90% off Exponential Audio PhoenixVerb