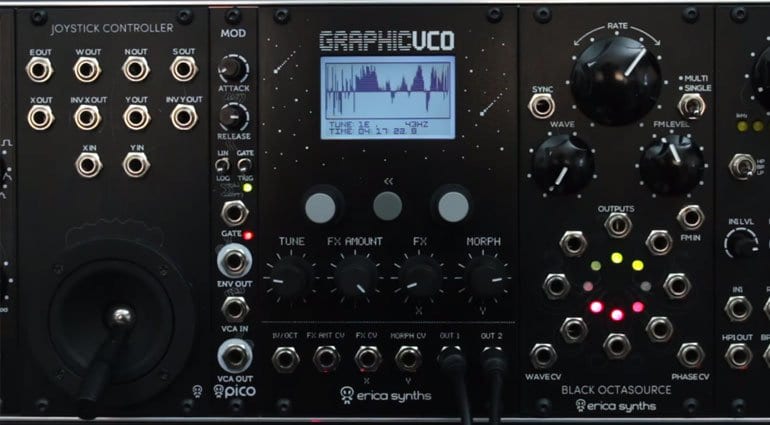 We first saw this thing in December and then it was at NAMM last month and while it looks fabulous the Graphic VCO has been a little tricky to fully get a handle on. Erica Synths have just released it for sale and we’re starting to have a much clearer idea of what it could do.

So, it’s an oscillator first and foremost, but one which allows you to draw your own waveforms. These can be stored in wavetables, allocated to banks and then morphed between. Your morphing wavetable can then be routed through some sound altering processes like FM, phase distortion, ring modulation, wavefolding and bit crushing. All the wavetable, morphing and processing settings can be saved as a snapshot and instantly recalled.

Although it comes with 32 wavetables ready to go it’s really all about your own wavetable designs. Drawing waves is done by a lot of knob turning. The three knobs top knobs letting you move the X position, width and boost and attenuate the wave shape. Trying to draw waves on the little screen might be a bit fiddly in which case you can also upload wavetables over USB. The three top knobs also take on navigation duties. The four knobs beneath handle the tuning, FX amount, FX parameter and morphing and over which you have CV control inputs. There’s a lot of fun to be had once you start modulating.

Watching the video (below) navigating about seems easy enough. I’m not a massive fan of menus in modules but nothing seems very deep or buried under levels. I guess the thing about digital modules is that they can get very complex, or become endless in the wrong way. Part of the modular way is to work within the limitations of simple circuits – but who am I kidding? The Graphic VCO appears to offer a great deal of sonic possibility, movement and variation that could bring a whole new palette to your rack.

The Graphic VCO is available now for €330. 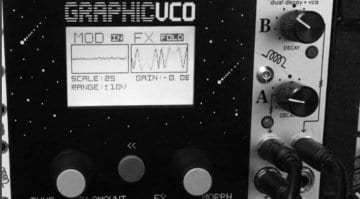