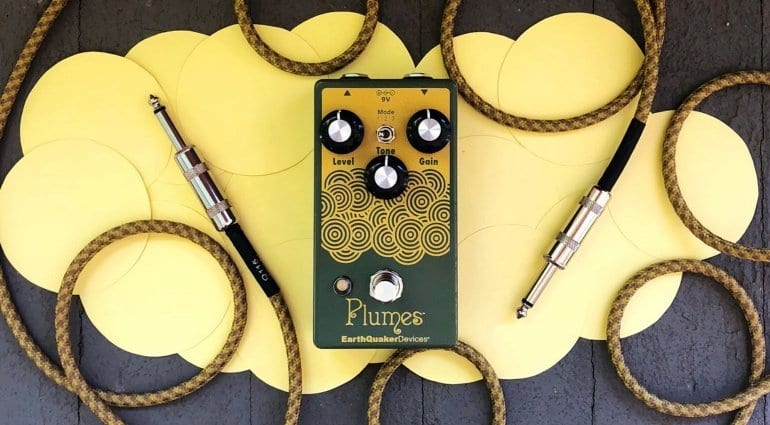 EarthQuaker Devices already has a highly regarded Tubescreamer in the Palisades pedal range. But the new Plumes is cheaper, more compact and has its own approach to the Tubescreamer circuit.

The new Plumes pedal is an independent interpretation of the venerable Tubescreamer circuit –  ” More headroom, less noise and much better sound quality.” In reality this means they’ve done away with the 4558 IC and the classic BJT transistor buffer. Instead, a JFET OpAmp is now installed in their place and the impedance raised to a full 10 megohms. 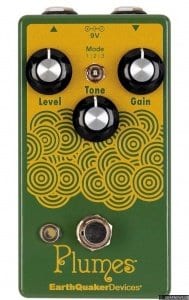 In addition to the usual Level, Tone, Gain controls, three Modes can be selected via a mini-switch :

Mode 3 should be closest to the original Tubescreamer sound, but with more output and a finer resolution.

EarthQuaker devices did not seem to be completely satisfied with the regular operation of the tone control.

“The lows are fat and tidy, the heights bright and cutting without killing the centers.”

The whole thing is rounded off by the so-called Flexi-Switch. The True Bypass is relay-based and allows either a permanent or momentary power on.

Does it need that?

If I want the sound of a Tubescreamer overdrive pedal, why not just buy one? Those who like to spend more money can buy the 400-dollar Maxon OD808-40K as a collector’s item.

In fact I think it offers a lot more than a bog standard version and the pricing is exceptionally good as well. So I would say it’s worth a punt if you are in the market for a Tubescreamer style overdrive/boost. The new EarthQuaker Devices Plumes is available from 03/08/2019.