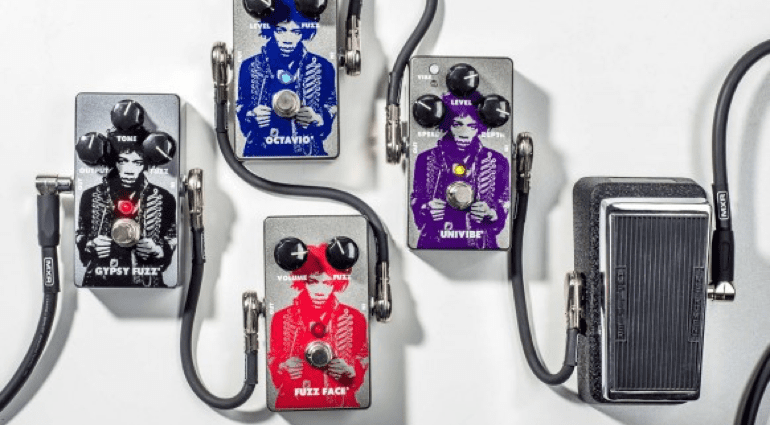 Dunlop are – yet again – releasing a run of ‘Hendrix’-orientated effects pedals. Can I be the only person on the planet that feels it’s about time they moved on? This looks like the limited anniversary edition from 2012 – with a new paint job.

The cash cow that is the long-dead Jimi Hendrix will sell just about anything. Personally, I am pretty sick of seeing Dunlop churning out stuff with Jimi’s face plastered all over it. Just release a good quality fuzz and/or wah, stop marketing the hell out of re-badged designs by slapping a screen-printed picture of Hendrix on them and making them limited runs or whatever. It can be done, just look at Keeley and their Monterey pedal for an example of how to do it. But apparently Dunlop/MXR would rather just carry on with the marketing hype and release ‘limited runs’ every 5 years or so.

You may by now guess that I am not a fan of what Dunlop churn out every few years. In fact, you may find the following descriptions a little… Well, let’s just say that you can already buy all of these pedals for less money now and from Dunlop, just in different cases! 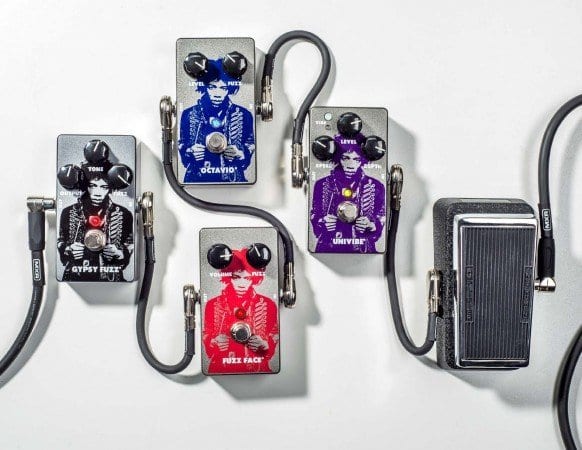 The Dunlop Jimi Hendrix 2017. New graphics and the same as before it would seem.

Just float your little mind back to the 2012 limited edition run of Hendrix pedals for the majority of these ‘new’ releases.

This is billed as a ‘Band Of Gypsys’-style fuzz pedal. This means it’ll be a silicon fuzz, as that is what Jimi was using during this era. This pedal is available elsewhere from Dunlop in a round blue format, as well as a few other formats, too. It’s all out there, if you do your research.

This is the quintessential octave effect used by Jimi on many of his tracks. Rehoused, re-branded and sold to you in the vain hope you’ll want to re-create that Purple Haze solo with that ‘octave-up’ effect that we all know and love.

Based on the other fuzz Jimi used, the Fuzz Face is that infamous ‘big round one’ that a certain company already sells. In fact, you can actually buy it in both a smaller or larger round version.  It’s a nice fuzz pedal for ’60s tones, but I am not sure I would recommend paying a premium to have Hendrix plastered all over it.

It’s a Univibe – I’m pretty sure they’ve already made this exact pedal a few times over now.

A miniature wah pedal which Jimi never used, nor the circuit which is housed inside it. It is quite small, though, so if you have a cramped pedalboard it might squeeze on nicely. Allegedly, this is based on a specific ‘Italian’ circuit Jimi favoured in his own pedals, but no actual specifics or further details from Dunlop are available as yet about this.

Check out the Dunlop MXR video below from the original launch back in 2012 to see exactly what I mean. Currently, there are no official details of the new range on Dunlop’s site, but all UK dealers have them listed as being released later this year.