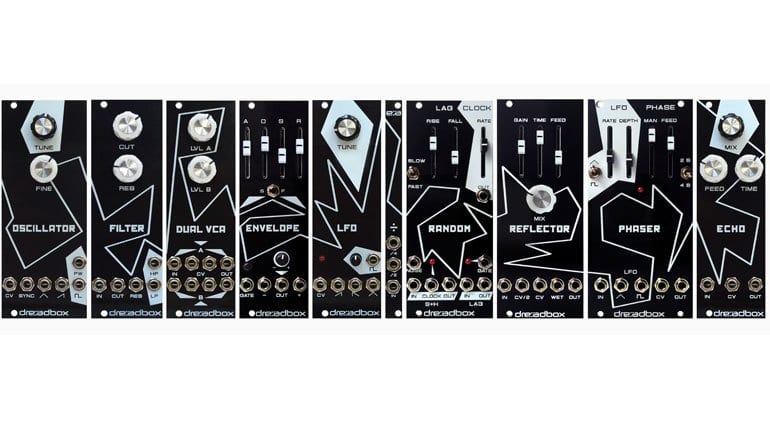 Dreadbox have announced a whole new range of Eurorack modules they are calling White Line. Designed to be of high quality (naturally – who would ever announce something to be a bit crap?) but also affordable which is a really helpful thing in the world of Eurorack.

Perhaps the idea is that you won’t need a rolled up 100 dollar bill to snort these babies – or maybe I watch too many movies. Anyway, the range launches with a great ensemble of players. There’s an Oscillator, Filter, Dual VCA, Envelope, LFO, Random, Reflector, Phaser and Echo. And that’s just the fun stuff. There’s also a bunch of utility modules.

The White Line motif trails itself across all the modules. If you install them in the right order then it all connects up in a really nice OCD pleasing kind of way. The front panels are made of glass epoxy. The circuitry is all analogue with through-hole components.

The marketing mentions that if you like their Murmux or Erebus synths (I have a very soft spot for the Erebus) then these should be right up your alley. But some of the units, the Drive, Reflector and Phaser, also mention that they come from the forthcoming and terribly secret Abyss synthesizer. This brings the hope that we might be seeing the Abyss sooner rather than later.

On the question of affordability there are all temptingly around the $99 mark.