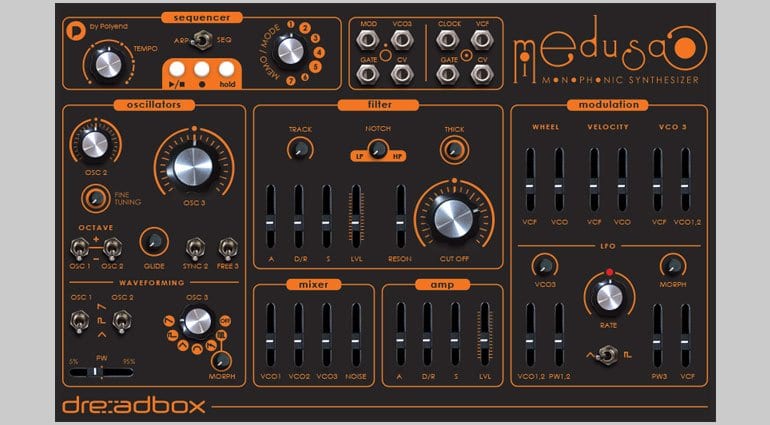 Dreadbox’s Medusa is a beast of another form. A desktop chunk of a monosynth in a similar form to the Abyss, but this one has a 64 step sequencer and arpeggiator. Grab a mirrored shield to protect yourself from its gaze and let’s have a look.

It’s all analog and rather beautiful in the orange against the darkness. The image looks like a mock-up to me. There’s no indication of whether it will get wooden cheeks like their other desktop boxes, but this is probably likely. It’s not due for release until December, so I imagine there’s a fair bit of development to come before we see the finished version.

It has 3 oscillators, 2 with your regular saw, pulse and triangle waves and 1 with some advanced wave forming giving a choice of 7. They’ve decided the Medusa needs a newly developed filter. The 12dB/oct design has “variable thickness” which sounds intriguing. Both the amplifier and the filter have their own Attack, Decay/Release, Sustain envelopes. There’s a simple modulation section with an LFO and multiple destinations. They’ve even thrown in a splattering of patch points to make it Eurorack friendly. You can chain them up to generate a bit of polyphony. There’s no effects section though.

The stand-out feature though is the sequencer. Dreadbox say that it was developed with Polyend who created that big, light-up hardware sequencer. That’s a very interesting collaboration. The 64 step sequencer can store the filter cutoff, modulation wheel and velocity values and has a slightly disappointing memory for 7 whole sequences. Having a memory at all is fabulous, but 7 memory slots seems a little stingy. It can also act as an Arpeggiator which gives some instant and satisfying pattern creation. It says that “MIDI to CV” was also developed by Polyend but I’m not sure where this is used. Presumably so the sequencer can control MIDI devices? Or maybe for bringing MIDI in from a controller. I’m sure these things will become clear in time.

The price is reported to be €429 which puts it around the new Roland SE-02. I’m really looking forward to having a play with this – well I’d say “monster” in reference to the name, but I’d struggle to call it a “monster synth”, but it does look really interesting and thankfully free of snakes or solidifying transformations.