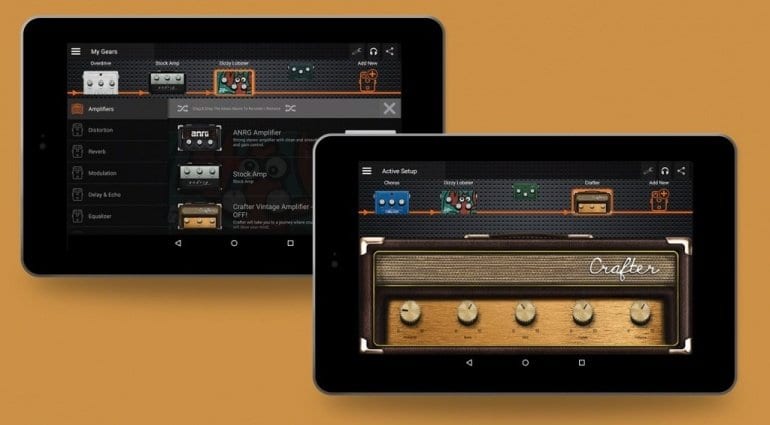 Deplike has just been updated to version 3.0 and brings with it a welcome new set of amps and a nicer GUI for Android. Will this version finally make some headway on one of the biggest mobile OS platforms?

I’m a huge fan of Android, mainly because of its open architecture and that it can be installed on devices from many different manufacturers. It’s a far cry from Apple’s ‘walled garden’ iOS, yet in the past this openness has also been a weakness. Factors like the non-standard hardware and the multiple iterations of the Android OS around – some with manufacturers’ skins overlayed on top – have made it hard to make audio apps stable. We wrote last year about the woes of music makers using Android.

This has now thankfully changed and Android is coming of age. Some companies like Samsung have been ahead of the curve and ensured compatibility with apps like IK Multimedia’s Amplitube. Other brands, meanwhile, have not yet managed to comply with the recent Android audio standards. If you owned one of their devices, you were basically left out in the cold until you updated your hardware.

Deplike brings amp simulation to all Android users running 4.1 or higher. We understand that it will also be available for iOS, although iOS 9 is not yet officially supported. The aim here is to make usable for everyone, whatever your choice of hardware. You can connect your mobile device to your guitar using either a USB or analogue interface. There’s also a quick video tutorial showing how to go about connecting your guitar which I have added below, if you fancy giving it a go yourself.

On top of this you also get 21 new effects, including overdrives, reverbs, EQs and even a looper pedal, giving you plenty to be getting on with. I found the new, neater GUI easier to get around on my S7 Edge.

Sound-wise, the official demo video sounds pretty reasonable, but I’d need to go and buy an audio cable for my phone to use it, so I cannot comment on it any further on the sound quality. I’ll see if I can rig it up over the next few weeks and let you know how it sounds, but it seems worth checking out more closely if you are a guitar player with an Android device.