Danelectro has just announced two new effects pedals, the Eisenhower Fuzz and Breakdown Overdrive. They are the launch products in its new vintage pedals range, and have been given a slightly aged look. But what can we expect from these pedals in terms of sound?

The concept of ‘aged pedals’ is arguably a daft one, but Danelectro has decided to go with it, announcing a new ‘vintage’ line. The first two releases are the new Eisenhower Fuzz and Breakdown Overdrive.

The Eisenhower Fuzz is based around a classic octave fuzz circuit design. But this version comes with added Gain and EQ controls. That makes it slightly more versatile in the modern world. Plus, it also comes with a “flat-sculpt” toggle switch which adds bass and drops the mids. You can hear it in action below and get an idea of what it can do.

Next up is the new Breakdown Overdrive pedal. This is more in the boost/overdrive vein. It consists of a single Volume knob, plus a six-position selector switch. Settings 1 to 3 are designed to be left on all the time, whilst settings 4 through to 6 are designed to hit the input of the amp harder to get those nice break-up tones we all like.

A simple enough control interface and possibly more than enough to get what you need from a good valve amp. Again, you can hear this one in action below.

I’m not convinced by the whole ‘aged’ pedals concept per se. But other boutique companies do it, like Beetronics, so it isn’t a major departure or anything. These two effects sound pretty decent, judging by the demos, and both also have silent true bypass switching, so won’t sound noisy and “tone suck” like real vintage effects pedal would do.

I’m looking forward to seeing what else comes along in this new range. Could this be a range to watch throughout 2019? 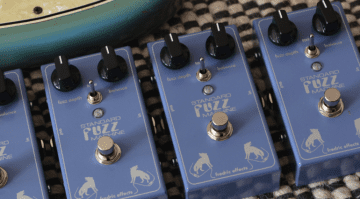