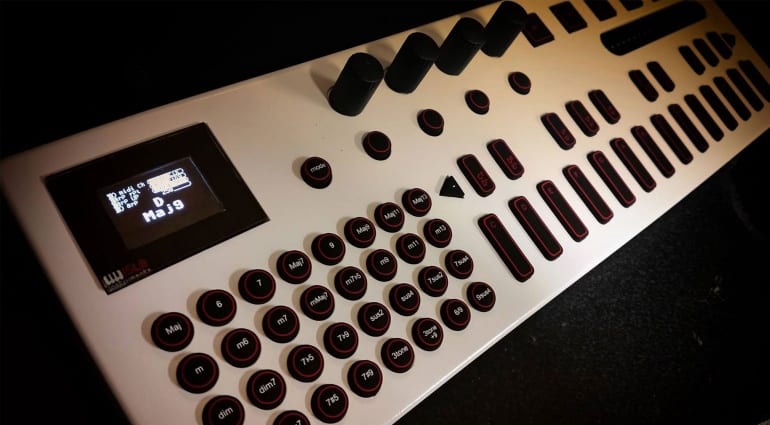 ISLA Instruments’ KordBot has been knocking around YouTube for a little while and they’ve now taken the step of launching a Kickstarter campaign to raise the funds they need to put the box into production. They’ve only been up a day and have already raised $30,000 of the $55,000 that they’re asking for. Most backers have gone for pre-ordering a finished KordBot for $179, and there’s only a handful of those left. So it looks like the KordBot has struck a chord (!) with a lot of people.

So, what does it do? Well, it’s billed as a MIDI Chord Generator, Arpeggiator and Step Sequencer. As founder Brad Holland explains, in a slightly awkward video, he knows his limitations as a musician and has been looking for a device to help him make more creative and interesting chordal choices. The device combines a little 2 octave keyboard with 32 chord modifier buttons that allow you to instantly send a chord out to any MIDI synth or sound module. All the usual chord types are covered with inversions as well as more exotic scales. It’s not just about triads either; the KordBot has a “Chord Spread” feature which expands the fingering of the chord up and down the range of a keyboard so you could get sounds that you’d need a bunch of hands to play. There are pads you can assign your chosen chords to for easy access, a few knobs to control parameters and a cool little ribbon controller which can be mapped to all sorts of things but also adds a strumming feature which lets you strum chords as you slide your finger across it. That’s a lot like the arpeggiator side of the device which can play the chords in the usual up/down fashion. The step sequencer is still under development but should offer 32 steps on up to 4 channels.

On the connectivity side we find the usual MIDI and USB options but also SYNC In/Out for analogue gear which is a bit unexpected, as well as the very welcome Bluetooth MIDI that’s becoming a bit of a standard these days.

It’s an interesting idea. There are some MIDI plug-ins which can achieve similar things in Cubase and other DAWs but perhaps having that functionality in a touchable, playable device is no bad thing. It looks like the eventual retail price will be USD $249 which isn’t too bad for what it offers, but it’s certainly not everyone’s cup of tea. They could do with a more exciting video and a decent image of the device.

The Kickstarter is here: https://www.kickstarter.com/projects/islainstruments/kordbot-midi-chord-generator-arpeggiator-step-sequ. The minimum pledge is $5 and they have t-shirts and mugs along with the KordBot if you’d like to pledge a bit more.