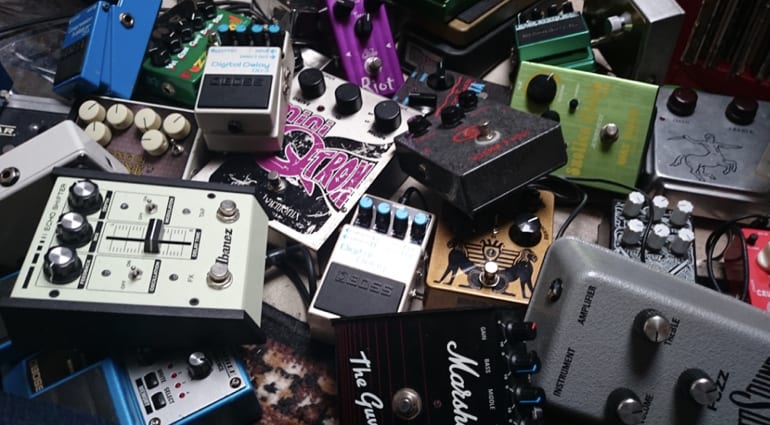 My name is Jef. And I’m addicted to pedals. You know, the little boxes with colourful lights and lots of knobs. This is a story of how a young guitarist discovered effects pedals and just could not stop buying them.

Confessions of a stompbox addict

My very first pedal was an old black label Japanese Boss SD-1 that my late father gave me for my birthday when I was 14. I had been badgering him for months, as I wanted something to give me a bit more added grit and sustain for my guitar. That was when the addiction took hold and ever since that fateful day I’ve been a stompbox addict. It was one of the only musical equipment items I had ever received as a gift and it changed my world for good.

By the time I was 15 I had a Marshall JCM800 100-watt half stack, the ‘yellow box of joy’ otherwise known as the Boss SD-1, a Dunlop wah pedal I had bought from Soho Soundhouse in Soho Square, London with my savings and a nice blue label Japanese Boss DD-3 delay I’d acquired used from my local guitar shop in North London for a good price. Armed with these three boxes and my Marshall, I could create merry hell at band practise and destroy whole venues with my abrasive guitar, all at ear-blistering volumes.

Then I scored a ProCo RAT and it opened my world to what you could do with a dirt pedal and an overdrive pedal when you stacked them. 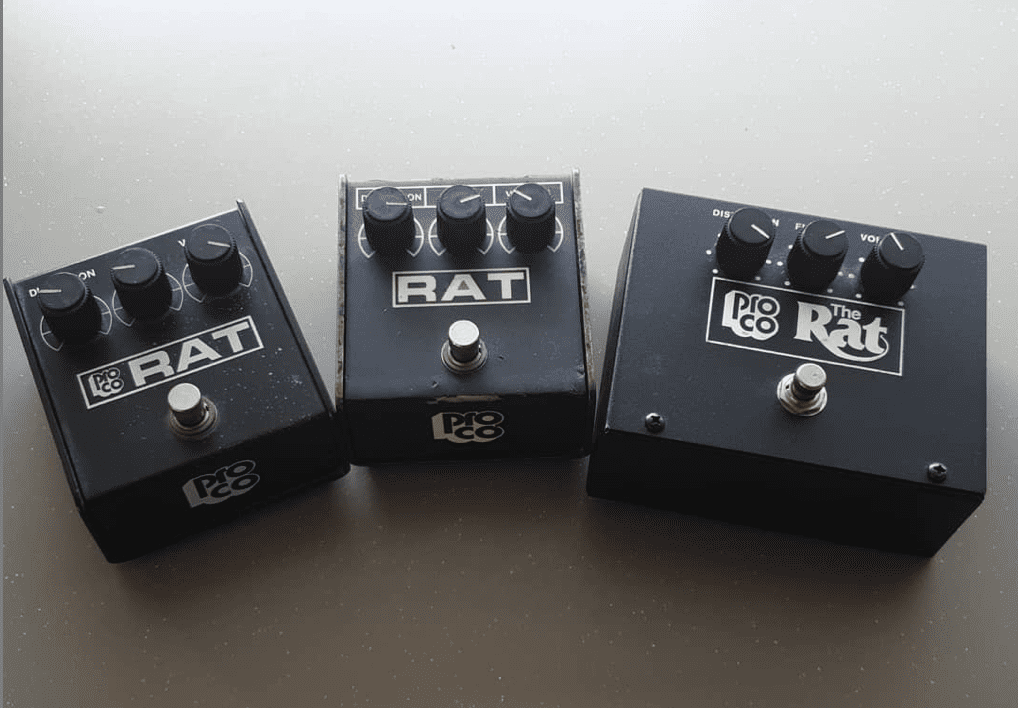 When I was a teenager, there weren’t many effects pedals around. It was Boss, DOD, Dunlop and once in a blue moon you might see an Electro Harmonix pedal in your local guitar shop. In the ’80s I discovered something called a Car Boot Sale. My pedal-buying habit took on a new lease of life.

My father and I would drive for hours to car boot sales to pick up old vinyl classic albums for peanuts. But I’d also hunt for used guitar effects, like old Japanese fuzz pedals, tape echoes and strange modulation pedals from the ’70s. And all the time, my addiction grew stronger.

As the late ’80s morphed into the early ’90s, my friends and I were listening to lots of US alternative rock bands. Everyone was after Big Muffs, ToneBenders and the like. Luckily, I had been stockpiling old fuzz boxes throughout the ’80s that I’d scored for peanuts.

It was the ideal time to nurture my crippling stompbox addiction. I still have boxes full of pedals. I keep a small collection on the wall for when I just want to pick up a guitar and play. I still can’t walk past a secondhand store or shops with any sort of music gear without my wallet twitching at the thought of some old tatty dirt box hidden under a pile of cables. 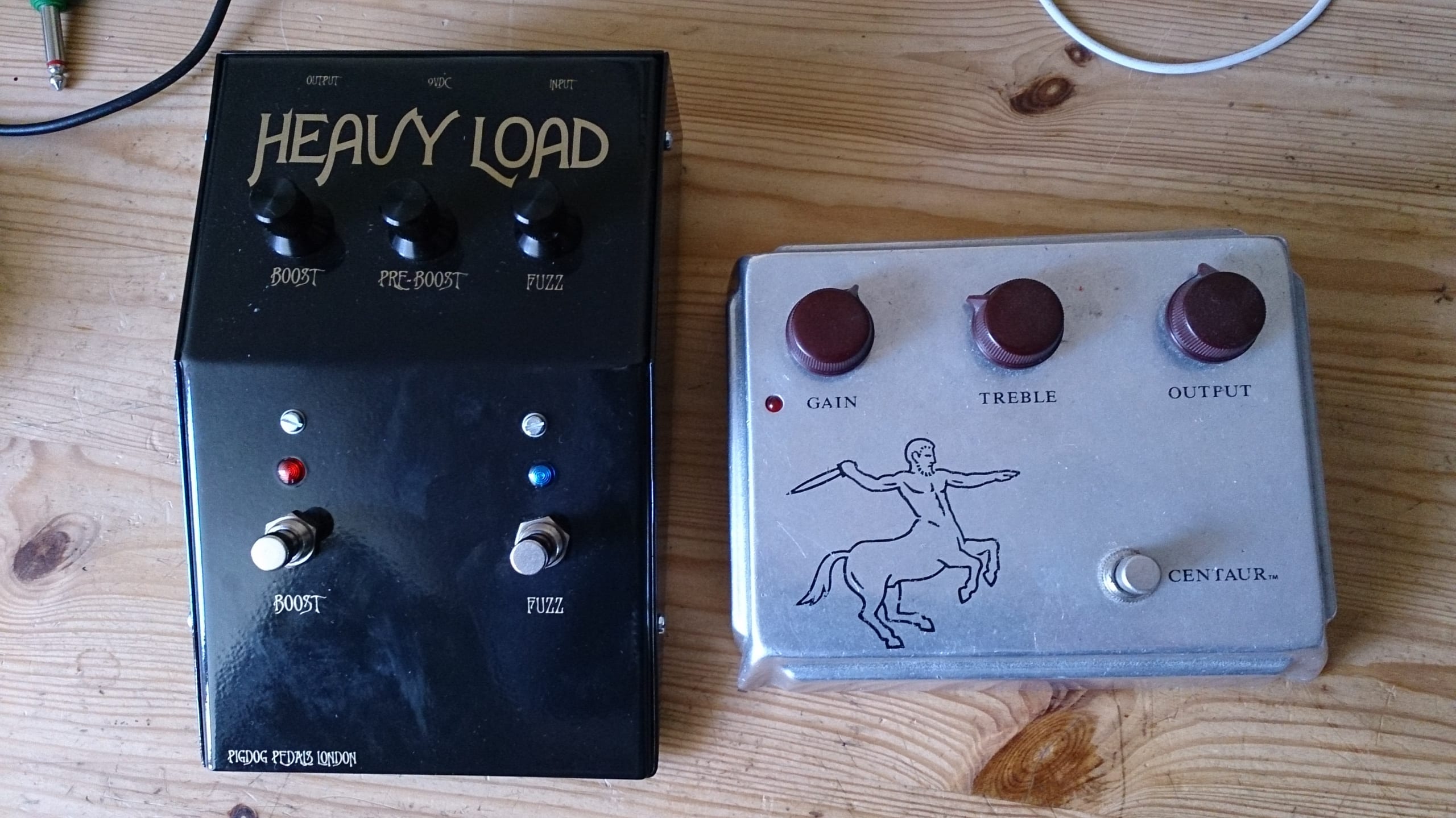 I often get asked, “What are your favourite pedals?” The answer is, I don’t have any. Yes, I like fuzz pedals and I also enjoy modulation effects like phasers and flangers. But I really don’t have any favourites in my collection of effects. Everyday requires different pedals, and I use them a little like an artist would use different shades of paint on a canvas.

Playing live I like a simple boost like a ZVex Super Hard On or my Suhr Koko Boost*. Often I have a phaser set slowly to modulate my guitar’s signal and make it pulse gently. Here I often use my Red Witch Deluxe Moon Phaser. When I really need space I tend to use my trusty old Boss DD-3* pedal that I bought as a kid. It’s very simple to use live.

In the studio I drag out a heap of pedals to use like you would plug-ins in your DAW. I have no idea how many effect pedals I own. I refuse to count them as it would put a number on my collection. For me it’s about having tools that are fun and that I can use to add shades and colours to my tone.

I don’t think I have ever paid more than about GBP 200-250 for any one effect pedal, including both the original Klon Siberia Centaur pedals I owned. Or even the Boss CE-1 pedals and other rare units I have owned over the years. All of these now sell for multiples of this and I honestly wouldn’t pay the ‘going rate’ for any ‘collectable’ pedal myself.

What artists influenced my effect pedal tones the most? Hendrix, Cream and Robin Trower. J Mascis with Dinosaur Jr, Robert Fripp (especially on Scary Monsters with Bowie). And Robert Smith with The Cure, My Bloody Valentine, Dave Navarro with Jane’s Addiction… the list goes on.

So when did your stompbox addiction start? What was your first? 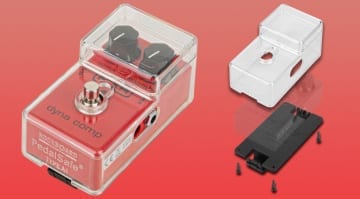 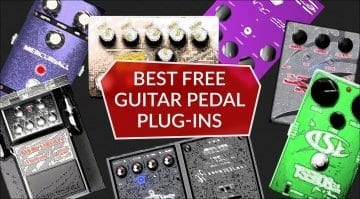 2 responses to “Confessions of a pedal junkie: How I became addicted to stompboxes”