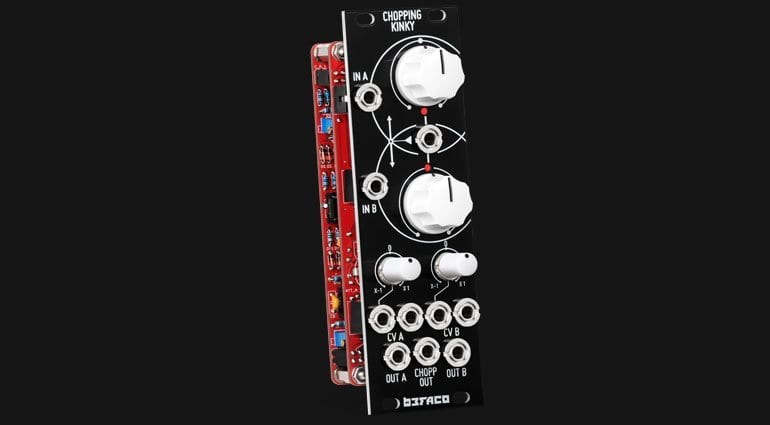 Befaco have been in touch to tell me they are releasing a new Eurorack module on Monday 20th March. It’s called Chopping Kinky, which probably tells you everything you need to know. No? Well, let me fill you in on the details.

Chopping Kinky is the awesomely named wavefolding module for Eurorack. Wavefolding is where you take a simple waveform and fold the heck out of it until it generates richer and dynamically changing harmonic content. It’s sort of the opposite of a filter in that respect. It’s a dual channel module with each channel having it’s own unique wavefolding  profile. So, the sound each channel generates is quite distinct.

The module is DC coupled which means it can handle audio and control voltage signals. So you can add harmonic content and saturation to audio signals, but you can also “kink” LFO’s and envelopes. See where the name is coming in now? There’s a third output called “Chopp”. This outputs either channel A or channel B depending on a signal going to the Chopp gate input. This can create some wonderfully rhythmic  dynamics.

Each channel has direct CV control over the waveshaping and a second one via an attenuverter to give you a more subtle range of control.

The Choppy Kinky with be available for €190 assembled, or €110 in kit form. More information will become available on the Befaco website once the product launches.

In the meantime check out the video below for a demo of all the features.