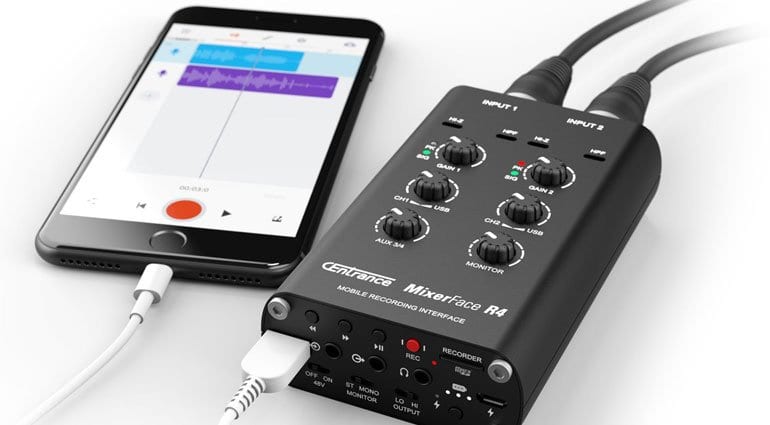 It may sound like it was hilariously named via crowdsourcing but the CEntrance MixerFace R4 actually looks like quite a serious piece of kit. Announced ahead of its debut at NAMM 2018 it’s a 4 input recording interface with built-in audio capture.

There are actually two models, one with and one without the internal recording to SD card. It’s such a cool idea they should have just gone with it, but it does add $50 to the price. Otherwise, you have two proper microphone inputs with 48V phantom power, which can also accommodate line and Hi-Z guitar inputs. There’s an auxiliary stereo input which brings the input count to 4. There are balanced and unbalanced outputs and CEntrance’s award-winning headphone amp technology.

Inside is a rechargeable battery which can apparently last up to 8 hours on a full charge.

A low-cut filter and direct monitoring blend control rounds off a decent set of features. The device support is excellent connecting to iOS, Android, Windows and MacOS via USB.

CEntrance also offers a matched stereo mic pair which turns the MixerFace R4 with the SD card option into a cool standalone field recorder. It’s $349 with the SD option, $299 without and the stereo mic is $49. It’s not beautiful but nothing by CEntrance ever is, but it does have a decent amount of flexible functionality.