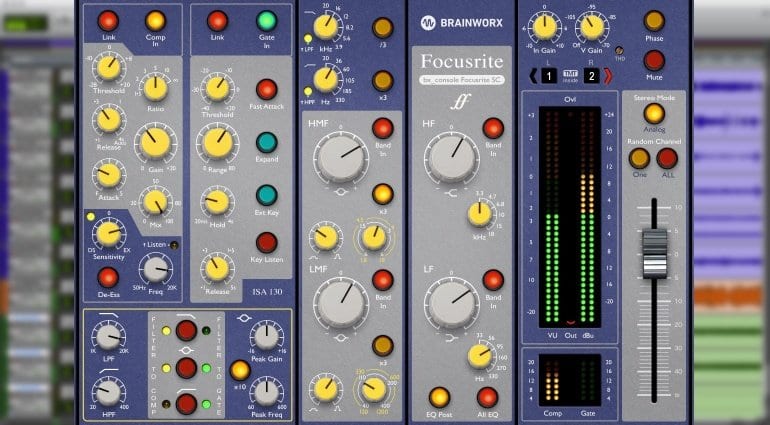 Acclaimed developer brainworx has reincarnated another interesting and rare piece of analog equipment in the digital realm. Focusrite SC is a Focusrite-endorsed emulation of the manufacturer’s coveted 72-channel Studio Console, of which only 10 were ever made. It originated from a pair of modules designed by Rupert Neve on behalf of Beatles producer George Martin.

The ISA 110 consisted of a transformer-coupled mic preamp and a four-band EQ with high and low-pass filters. Later, the ISA-130 compressor/limiter/de-esser module got to keep it company. Focusrite had trouble funding the development of the console and sold the intellectual property to Soundcraft Electronics. There, the Focusrite Studio console was eventually completed, offering what the marketing blurb for this plug-in describes as a “punchy” character and “clinical” equalization.

Using its proprietary Tolerance Modeling Technology, brainworx modelled all of the console’s 72 channels including the phase and frequency response variances among analog components in each channel. Running different channels on your tracks is meant to deliver a richer-sounding mix and is said to be different from running identical plug-ins with different settings for individual tracks.

On top of the console emulation, brainworx added Total Harmonic Distortion and Virtual Gain controls. The former is meant to squeeze out additional color and saturation. The latter introduces simulated noise for a truer analog sound. Several unspecified mods have been done to the EQ and Dynamics sections as well, all under Focusrite’s watchful eye.

As a whole, this looks like another solid console emulation to try mixing with.

Focusrite SC will go on sale on July 15 for an unspecified price. Meanwhile, a 14-day, dongle-free fully functional trial version is available for download after registering an account with Plugin Alliance. The plug-in is available in AAX (DSP, Native, AudioSuite), AU, VST2, VST3 formats for Windows and Mac computers.