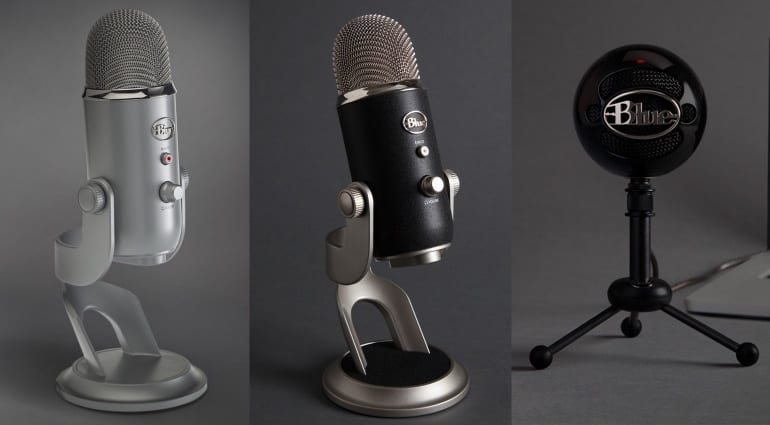 Blue Microphones have added two models to their USB Studio Series, offering 3 competitively priced all-in-one recording packages: Yeti, Yeti Pro and Snowball. Each mic is equipped with USB interface and includes recording software. Are these the quick and easy solution you need? Some might argue that these aren’t pro solutions, but useful tools for home recording or on the road.

Released last year I believe was the Yeti Studio mic. Fixed on a table top stand, which will be ideal for some but not for everyone, the Yeti mic features multi-polar patterns suitable for different recording scenarios. This mic also features a headphone output so that it can be used for monitoring and zero-latency recording. Capable of recording up to sample rates of 48kHz is fine, but I find the limit of only capturing at 16 bits a little dated and potentially un-useable for some projects.

The all-singing and all-dancing Yeti Pro Studio mic can record up to sample rates of 192kHz and 24 bits, which I think is expected by pro gear these days. The Yeti Pro is similar to the Yeti in terms of build and capsule design, but along with the upgraded sample rate and bit depth capabilities, an XLR breakout cable can be used with other equipment.

The smallest, but most fun-looking of the bunch is the new Snowball Studio mic. Also equipped with USB connectivity, this mic still offers a choice of cardioid or omni polar patterns but is very limited on the sound card front. This entry-level solution will only support recording rates of 44.1kHz and 16 bits, which in my eyes voids this product from any serious use. It sounds great in this video though!

To complete the simple connectivity and fast installation these mics offer, Blue Microphones have joined forces with PreSonus and iZotope to add the software element to these packages. All three mics will ship with a copy of PreSonus Studio One Artist. Whilst being the ‘Artist’ version and not the full version of this popular DAW, it should still be very capable of most tasks required when using these mics. After all, that’s 69 GBP’s worth of software included in the price. The Yeti and Yeti Pro will also include iZotope’s Nectar Elements; the full version of Nectar is a plug-in I use almost weekly.

The Yeti Pro, Yeti and Snowball Studio Series Mics are expected to retail at 269 USD (+ tax), 149 USD (+ tax) and 99.99 (+ tax) respectively. These are great prices, even comparing the Yeti Pro to other options available. For more information, click on these relevant product pages: