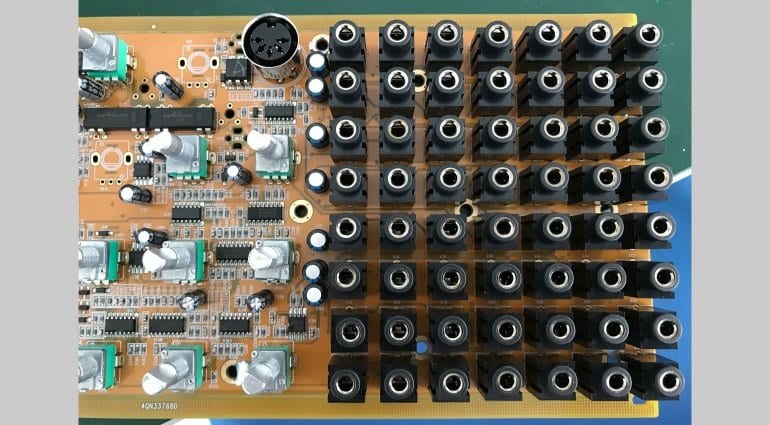 Hang-on, I’m not sure we’ve seen Behringer’s synthesizer of 2017 yet, but the Model D is supposed to be here any time now. Regardless, Behringer are pressing on with their published intentions to clone everything. This image popped up on Facebook and they are wanting us to guess what it could be.

Well firstly it’s probably in the wrong orientation in the original image, so I’ve put it landscape in order to make that sit a bit better. It has this extraordinary matrix of 56 jack sockets, which are presumably patch points.

Most of the suggestions in the comments keep coming back to three potential synth DNA donors: ARP 2600, Korg MS-20 and Oberheim SEM. All three have a healthy bunch of patch points. The ARP 2600 has its patch points more scattered than the rest although in a past discussion Uli Behringer mentioned that they were going to do an ARP 2600 clone with 50-odd patch points. And if this was Eurorack compatible then that might account for the layout.

There does appear to be a pair of V3205SD chips on the board which are “bucket brigade” BBD analog delay circuits. Not sure that’s very helpful as it’s much more likely to be a Behringer addition to the synth rather than something cloned from an original. The only other IC I can make out is probably a HEF4052BT dual 4-channel analog multiplexer/demultiplexer. But I have no idea if that’s helpful or not.

It does have a size that suggests Eurorack. The Moog Mother-32 has a patch bay that’s 8 sockets tall, although only 4 wide. But 8 sockets fits nicely into the form factor.

Suffice to say that Behringer continues to tease, delight and annoy us in equal measure. And whether you love it or hate you have to be a little bit intrigued as to what they will produce next. What do you think?