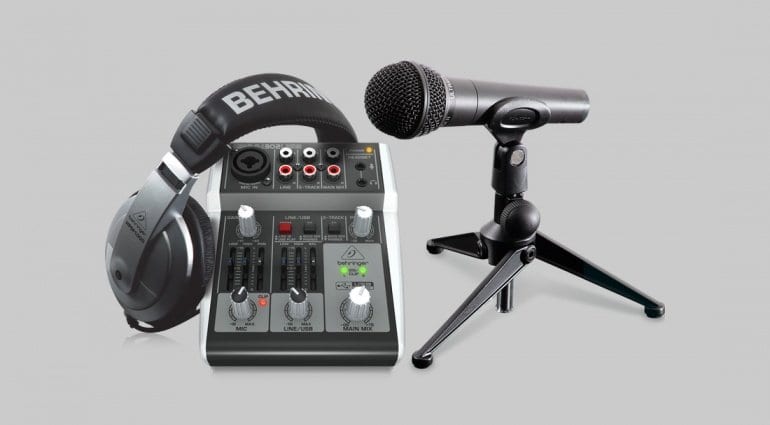 Behringer has updated its entry level podcasting bundle. The Behringer Podcastudio 2 USB includes a USB mixer, a pair of headphones, a microphone, mic stand and cables. If you’re planning to get into podcasting, gaming live streams, or any other desktop recording activity on a budget, this bundle is for you.

At the heart of the Podcastudio 2 USB is Behringer’s Xenyx 302USB mixer. The compact 5-channel mixer features one XLR mic input with phantom power, one stereo line/USB input and one stereo 2-track input. The microphone and line/USB input channels each have a 2-band equalizer. The mixer works as a USB audio interface on Windows and Mac computers. The bundle no longer includes a dedicated audio interface like the previous Podcastudio, which came with the UFO202. But since the mixer has that functionality built in, that’s one less device taking up space on your desk.

The bundle also includes a Behringer Ultravoice XM8500 microphone. The dynamic mic has a cardoid polar pattern and a frequency response of 50 Hz – 15 kHz. It comes with a mic stand adapter and carrying case. You also get a tabletop mic stand and XLR cable.

For monitoring, the bundle includes a pair of Behringer HPM1000 headphones. Behringer says that the over-ear headphones have oval-shaped ear cups and “high resolution capsules”. The single-sided cord offers 1/4″ and 1/8″ connectors, so you can connect the headphones to the included mixer or your smartphone, for example.

Finally, the Podcastudio 2 USB bundle comes with a software package. They don’t say exactly what’s included, but according to Behringer, the software allows you to record and edit audio and produce podcasts. They’re also throwing in more than 150 virtual instruments and plug-ins.

With the Podcastudio 2 USB, Behringer is offering an entry-level alternative to other podcasting and recording bundles like the Focusrite Scarlett Solo Studio, Presonus Audiobox 96 Studio or the more expensive, pro-level RME Babyface Pro Podcasting Bundle. The price hasn’t been announced yet, but the previous edition sold for under EUR 100, so you can expect the Podcastudio 2 USB to be a similar bargain. 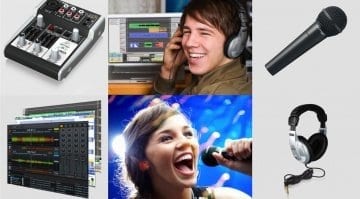