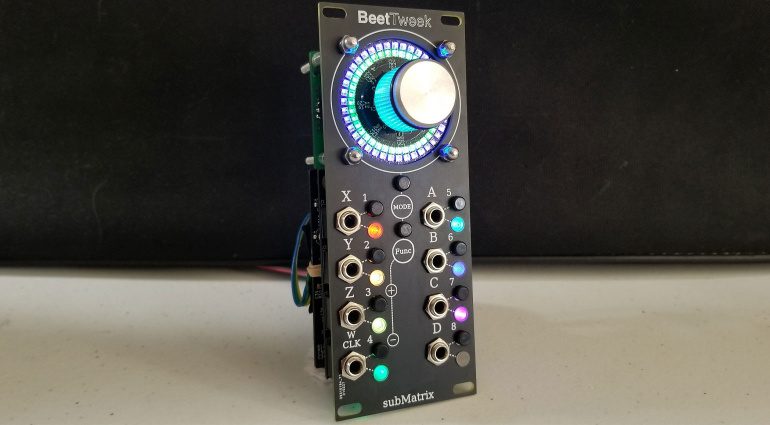 BeetTweek is a high-precision rotary sensor that moves itself in many modes of haptic force feedback. From returning to zero to spinning out modulations this is a new form of modular interaction.

The style of that encoder haloed in those bright RGB LEDs is quite a sight to behold; this is one good looking module. BeetTweek brings motorisation to modular with a spinning knob that responds in all sorts of different ways depending on the mode it’s running. It can pulse, it can spin, it can rotate to precision positions which are either informing your fingers as to what’s going on or doing the heavy lifting of interactive modulation for you.

Watching it in action is fascinating. It’s also a bit strange when they draw a line on the endless encoder to show a position but this DSP driven module can be lots of different things.

The knob with spring back to its original position; whatever it was set to or whatever the input signal is producing. So it’s like you can momentarily turn something up and know that it will return precisely to where it was before.

The knob can be spun in either direction and it will retain that speed. There are 8 points around the knob that send out a pulse when passed. You can also use it to record and scratch audio.

Incoming CV signals control the torque and friction applied to the knob in either direction creating complex interactive forces that generate interesting outputs.

The snaps the knob to different indented locations around the circle. The indents can be felt when turning the knob.

The knob goes freely one way and responds to you turning it the other way. That’s easier to see than it is to describe.

There are more modes to come including sequencing and torque curves. The module isn’t scheduled to ship until November and so there’s plenty of time to add further modes and develop the possibilities.

In terms of connections you get 4 inputs and 4 outputs for audio or CV signals. 8 buttons give you access to the functionality and 8 LEDs let you know what’s going on.

One of the cool features is the recording and playback of gestures or turns of the knob. The brilliant thing that BeetTweek has over other CV recorders is that you’ll actually see the knob repeat what you recorded. This has always been the advantage of software synths in that you can see movement and modulation animated on or around the knobs – this is a great step in reclaiming some of that usefulness for hardware modular.

However, it comes at a cost. Pledging support on the Kickstarter campaign will cost you $700 so it’s unlikely that you’ll find multiples of the BeetTweek motorising modulations in many systems. But as a fascinating module perfect for experimental modulations and “feeling” your way through your performances this could be awesome. And just look at it – wouldn’t you love to have one in your rack? 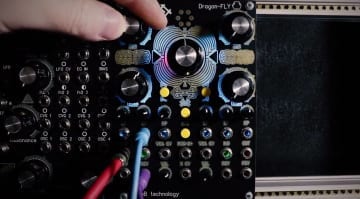