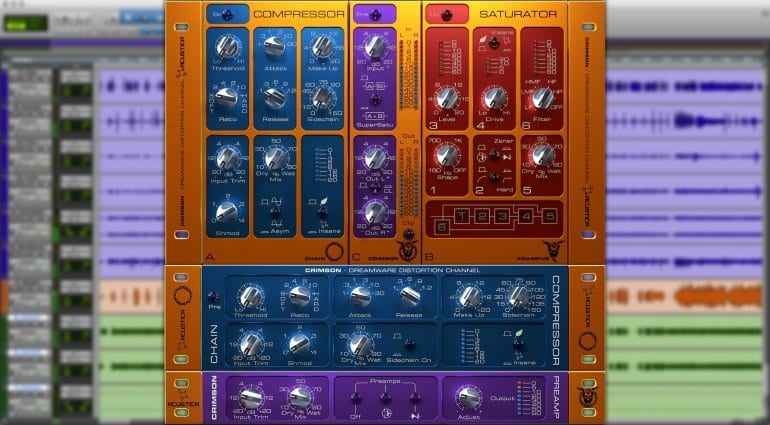 Acustica Audio released a new plug-in in its Aqua series of analog-sounding simulations. It’s called Crimson and it’s designed for “precise compression” and “colourful distortion”. It has three hearts, so to say – Crimson, Crimson Comp, and Crimson Pre. Crimson is a very interesting plug-in suite, so let’s have a look at what’s going on!

This is a discrete VCA compressor emulation “inspired by an expensive and powerful German unit.” It’s capable of providing analog sound typical of 70s and 80s compressors, but also includes modern day features and proprietary controls, such as Asym for altering the compressed signal’s symmetry and generating even harmonics. ShMod alters the shape of the compressor’s attack phase. There’s also the Insane control for enhancing the compressor’s accuracy and speed; the trade-off is a higher CPU load.

This module is Acustica’s interpretation of a “world-renowned analog saturator,” designed with the goal of adding realistic analog warmth without digital artifacts. There are two independent circuit emulations with different kinds of analog flavour – FET (default mode with even harmonics) and ZENER (odd harmonics). The former is good for warm saturation or distortion, the latter offers a bright, clear flavor. There’s a Shape control for selecting the affected frequency range, as well as a Hard/Soft switch, a multi-mode filter, and more controls for dialing in the effect.

The Main module features a preamp section where the phase, frequency response, and harmonic distortion of different analog circuits are emulated. There’s also the Supersatu feature that lets users insert a compressor module in the saturator’s signal chain. According to Acustica, this produces saturation that sounds “louder, richer, and more in your face.” The developers have also added a clipper for hard-limiting transients above 0dBFS that emulates an analog circuit, preserving their perceived shape.

Overall, Crimson is a very ambitious plug-in which, in skilled or imaginative hands, may find appropriate use in the creative, mixing, and mastering stages of a production.

Crimson is available in VST, AAX, and AU formats for 32 & 64-bit Windows and macOS systems. The regular price is 129 EUR, with an introductory 15% off price (109.65 EUR) during the first four weeks of its release. A free four-week trial version can be downloaded. Acustica Audio plug-ins are installed and authorized through the Aquarius application, which is an assistant developed for downloading, installing, updating, and authorizing the company’s software.