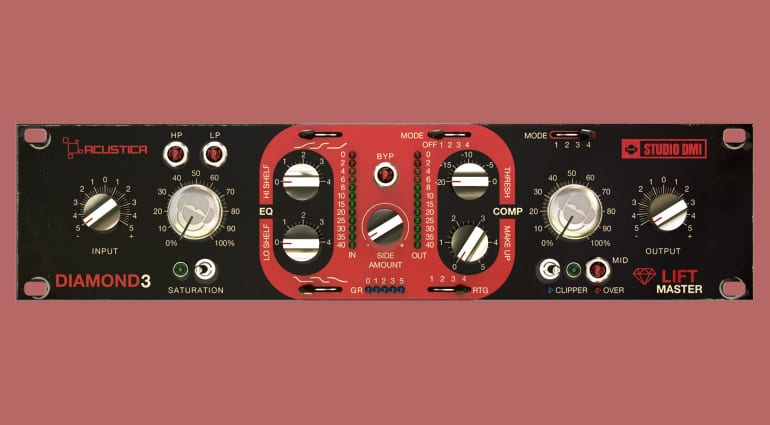 Acustica Audio says its new Diamond Lift 3 is a “superprocessor” that emulates rare hardware humming inside Studio DMI, hardware that’s responsible for the studio’s signature sound. Now at version 3, the plug-in’s latest release adds important tweaks and tricks. Acustica also slaps on an introductory pricetag for a limited time. The update from previous versions is free.

Like its predecessors, the plug-in conjures the sound of producers Luca Pretolesi and Scott Banks on individual tracks and the master bus. For this purpose, you will find two versions of the plug-in – one for mixing and one for mastering.

According to Acustica Audio, version 3 offers improved high and low pass filters, the new “Insane” compressor mode, a mid-band control for the clipper, and “versatile” routing. The exact hardware which serves as the original remains a secret that could also be related to licenses and such. In any case, Diamond Lift 3 features high and low-pass filters, a switchable saturation, coloring low and high-shelf EQs, a compressor, and a clipper. There are also controls for input and output gain, as well as two mix controls – one for the Saturator and one for the Clipper. Further extras include Mid/Side processing, selectable slopes for the equalizer, different modes for the compressor and a sidechain option.

So if you like the sound of Studio DMI and want it in a plug-in, Diamond Lift 3 is as close as it gets save for crashing at Luca’s couch. There aren’t enough “insane” compressors out there, right?

Until June 4, Acustica Audio Diamond Lift 3 is being sold for EUR 79 down from EUR 149. The plug-in is available from Acustica Audio’s website. It works under macOS 10.14 or later and Windows 10 or later in VST, AU, and AAX formats. A demo version and a PDF user manual can also be downloaded from the product page. The developer’s Aquarius plug-in manager handles installation and licensing.