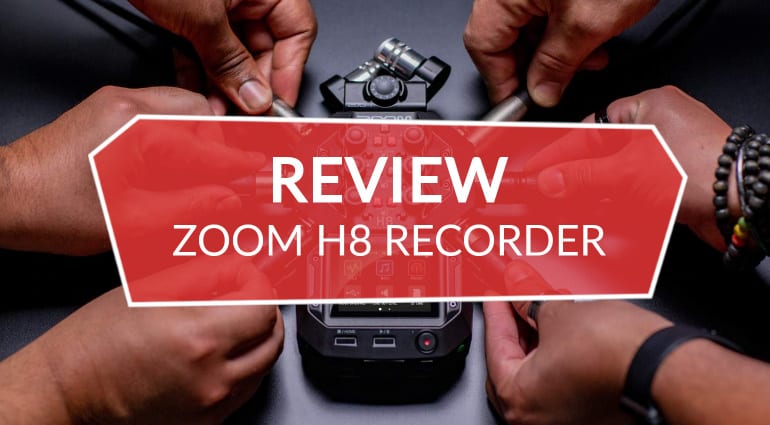 Is the Zoom H8 the best handheld recorder around?  ·  Source: Zoom 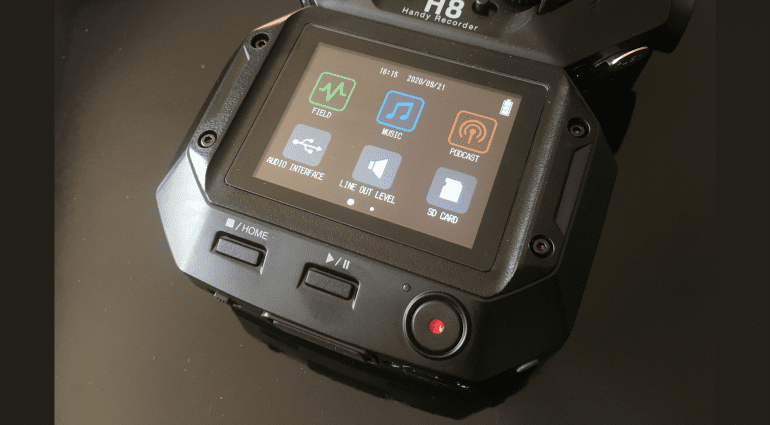 Zoom promises that its new H8 Handy Recorder is “the only recorder which adapts to your way of creating”. Gearnews’ Bob Malkowski took a demo unit for a spin and shares his thoughts on this remarkable gadget.

Over the last few years, Zoom has become a giant in the world of portable recorders and podcasting solutions. In July, Zoom announced its new, flagship Handy Recorder, the H8. I was immediately keen to review it: Eight inputs out of the box and the ability to record up to 12 channels simultaneously! It also has three dedicated configuration modes built in, Field, Music, and Podcast. Was my initial enthusiasm justified? Has Zoom upped the ante in the handheld recorder market? Let’s check it out.

My very first impression: I was surprised at how compact the H8 is. I was expecting a much larger box! Opening it up, I was greeted by a device which looked part Borg and part tactical weapon! The Zoom H8 has the feel of a sturdy piece of mid-level camera gear. I’m sure it’d withstand a good few knocks here and there but it’s probably best you invest in a carry case.

Installing the included AA batteries, I had the unit powered up within minutes of unboxing. You’re first prompted to set the date and time so that the H8 can date-stamp your recordings. Next up we have to install an SD card which isn’t included. The card I used was incorrectly formatted, but the H8 prompted a reformat quickly and easily. Nice. 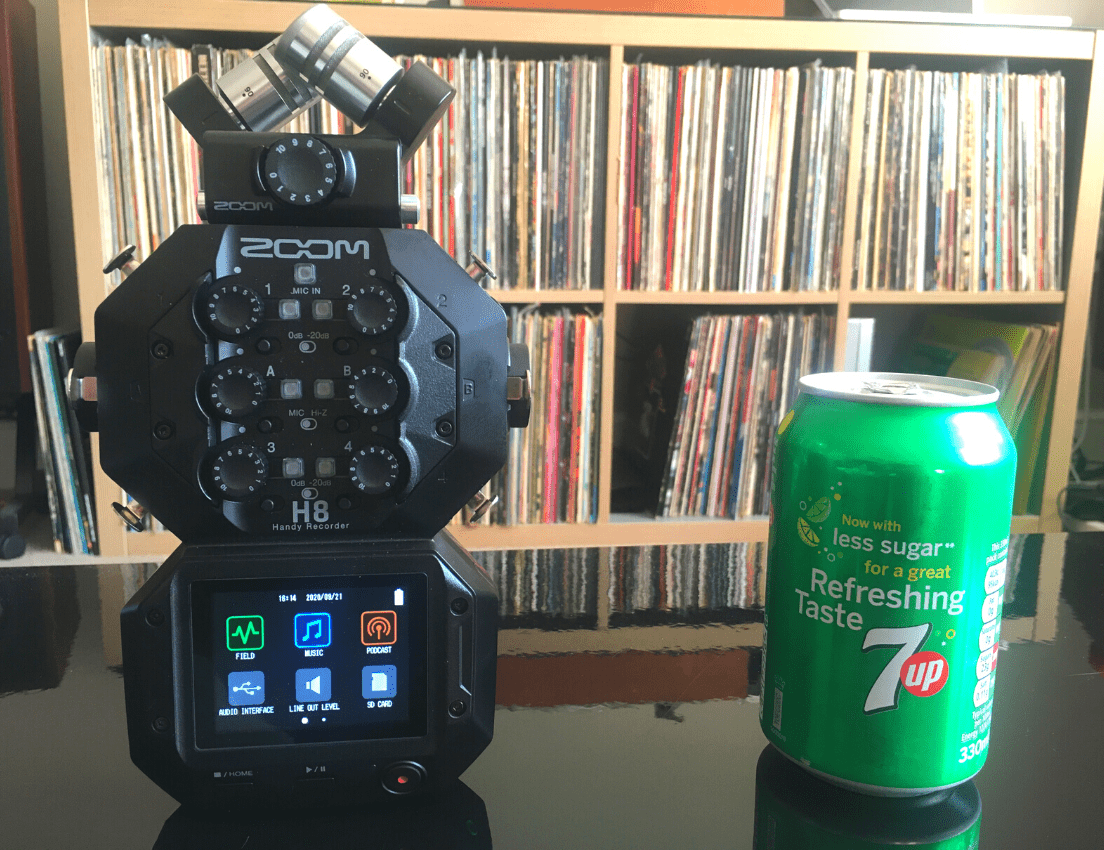 ZOOM H8 and carbonated beverage for sense of scale.

The first test for the H8 was as a simple, stereo field recorder. I installed the bundled XYH-6 XY stereo microphone. The XYH-6 connects to the H8 via an expansion port on the top of the unit under a clip-off cover. I was impressed that a storage spot for the cover is provided on the base of the H8 so it doesn’t get lost.

The XYH-6 is one of a range of mic modules from Zoom, including shotgun, mid-side and even ambisonic mic arrays. You really can tailor the H8 to a huge range of field recording situations. I was impressed with the XYH-6 and started walking around the house recording anything and everything which made a sound! I then tried a large-diaphragm condenser into the microphone inputs and was equally impressed with the results for close-miced voice-over work.

What’s clear is that the quality of the microphone preamps and mic capsules are very good indeed for the money. There was no discernible noise from the mic preamps and the results were clean and transparent. Recordings using the XYH-6 XY stereo mic had an amazing sense of depth and realism belying the price point. My only criticism was some handling noise when hand-held; employing the onboard high pass filter alleviated much of this.

I then loaded up the Music App which has two major functions: on the go recording of a whole band and streaming multiple microphone/instrument sources. The Music App opens up a neat little mixer window on the touch screen which gives a surprising amount of control. Within the mixer, you have the option of adjusting the individual level of each source, pan, basic three-band EQ and effects send level.

Ahhh yes, effects! It should come as no surprise that the H8 includes DSP based effects; after-all Zoom made their name decades ago making guitar processors and FX units. With this in mind, I was perhaps expecting more from the onboard effects in the H8.

Firstly, it’s not possible to adjust any of the preset effects parameters from the H8 itself, which is a major limitation. You have to use Zoom’s Guitar Lab editor on a computer whilst the H8 is connected over USB. Secondly, the quality of the effects and processing is, how shall I say this, a bit ‘last decade’. View it as a welcome bonus function rather than a selling point. The amp sims aren’t especially inspiring, but it is welcome to have some onboard reverb and compression for vocalists included.

Your microphone and instrument inputs can then be recorded natively to SD card, or streamed to a connected computer via USB. Usefully, the onboard mixer can be used to stream a mixed stereo pair to a connected computing device. I can see the Music App perhaps being most useful for video live streams to social media although the preset nature of the DSP would require some prior preparation on behalf of the performers! 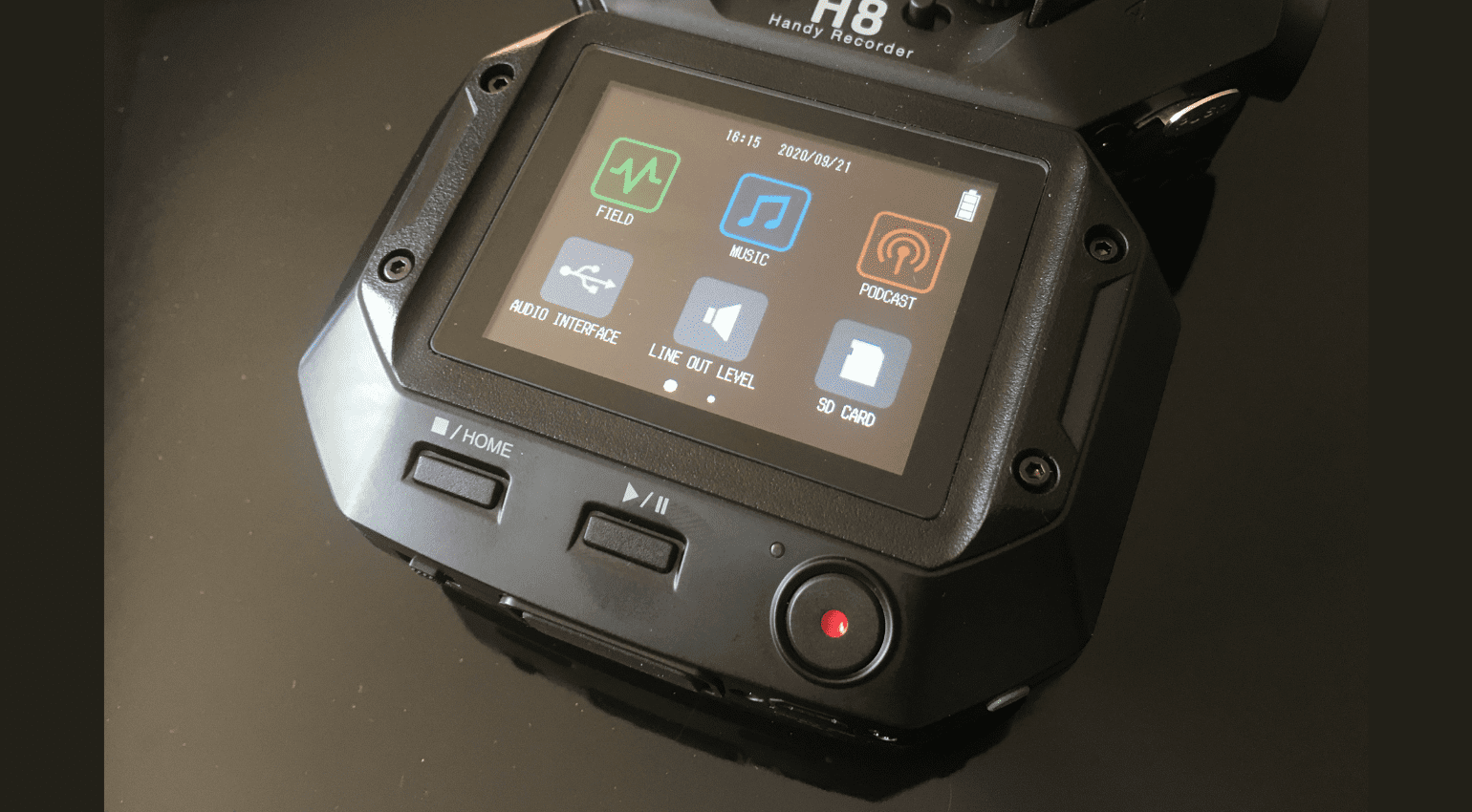 The touchscreen display of the ZOOM H8, showing the various App Modes on offer.

I was very interested to try out the Zoom H8’s podcasting abilities because the idea of a self-contained podcasting solution is quite exciting! Opening the Podcast app configures the screen for Podcasting and gives access to four “Sound Pads” on the touchscreen. These allow you, as a podcaster, to play jingles, station IDs and idents. Perfect eh? Well, almost perfect…

The H8 allows you to adjust the level of the Sound Pads, but only globally. In other words, you can’t set pad one to be loud and pad 3 to be quiet; this is a common requirement for “radio shows”. Many shows will run a low-level “music bed” underneath the presenters whilst also having loud, punchy jingles and show idents to add drama. That’s not currently possible with the Zoom H8, which seems a shame.

Whilst I’m on the subject of the Sound Pads, there’s another irritating quirk. Any audio files you load into the Sound Pads has to be in .wav format and the bit rate has to match that of the show you’re recording. It would have been much more convenient for the H8 to convert file type and bitrate upon import.

It should also be noted that using Sound Pads disables inputs 3&4; in practice, however, there will still be plenty of mic inputs available for a typical show. I’d really like to have seen more headphone outputs. Had Zoom given us another two or three headphone outputs it would have elevated this into an exceptional stand-alone podcasting solution.

For the price, the ZOOM H8 is a very impressive piece of kit indeed. For your money, you get a field recorder, a podcasting solution, a multi-track hardware recorder and a multi-channel audio interface. Of all these roles, it’s as a field recorder I feel the H8 excels at with the podcasting functionality a close second.

In terms of competitor alternatives, I can think of only the Tascam DR680 MkII offering similar features for the money. It’s much more focussed towards field recording, however, and offers neither the H8’s modular microphone systems or its podcasting and streaming versatility.

Zoom needs only to make a few tweaks to their software to turn the H8 from a very good portable recorder into a truly great Swiss Army knife of an audio machine.

The H8 costs EUR 399/GBP 375 via retailers like Thomann (affiliate link below), and should be shipping at the end of September.

This post contains affiliate links and/or widgets. If you buy a product via an affiliate partner, we receive a small commission that helps support us financially. But you pay the same price you would have anyway.

2 responses to “ZOOM H8 Review: The only portable recorder you’ll ever need?”